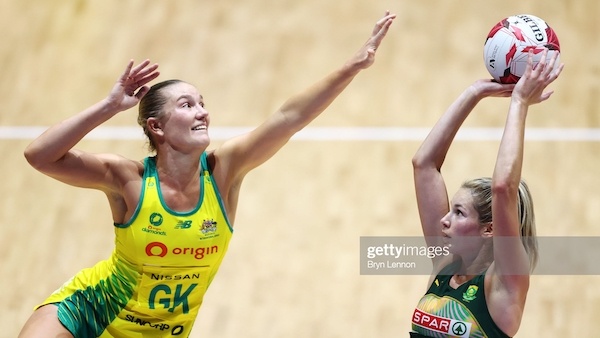 Diamonds stand up in second half for smooth win over Proteas

The Australian Diamonds have absorbed the pressure of the respondent South African Proteas in a smooth 20 goal win.

Diamonds stand up in second half for smooth win over Proteas

The Australian Diamonds have absorbed the pressure of the respondent South African Proteas in a smooth 20 goal win.

The Australian Diamonds have absorbed the pressure of a respondent South African Proteas outfit, trialling new combinations in a smooth 20 goal win for their second Quad Series victory.

It was far from the clean and clinical performance the Diamonds had against the Silver Ferns on Sunday morning, however, the response from the Proteas - who suffered a 23 goal smashing from the Roses - made it a tough contest early.

The Diamonds made changes to their starting line up from round one against the Silver Ferns. Paige Hadley moved out to wing attack, to make room for Kate Moloney at centre, while Maddy Turner got her start at goal defence.

While it's no surprise there was movement in the squad, the resting of captain Liz Watson, especially early on in the match, looked like a crazy call as Bongiwe Msomi in centre and Izette Griesel at wing attack was an aggressive and much stronger combination for the Proteas.

After Australia pushed out to an early lead, thanks to some fast transition to Gretel Bueta and Steph Wood in the goal circle, South Africa drew level in the opening quarter.

South Africa made immediate changes in defence, Tshina Mdau came on at wing defence, and Monique Reyneke moved into on at goal defence, and these partnerships continued to trouble the Australian line up.

Turner was effective individually at goal defence, but the partnership with Courtney Bruce was not working for Australia, and the decision was made to lean on a strong Super Netball combination.

Sunday Aryang made her Diamonds debut, joining Bruce in the defensive circle with under five minutes to go in the first half.

Post-match Bruce admitted the familiarity of playing with Aryang helped as the pair got on top of the Proteas' shooting circle.

"I think our defence combinations are strong no matter who’s out there, I think there’s obviously a level of comfortability with Sunday (Aryang)," Bruce said.

"But I think with a team like South Africa, you’ve got to build into a game - it’s not going to be won in the first quarter."

That goal circle defence, combined with Ash Brazill once again competing hard all day at wing defence, started to slow South Africa. The side's accuracy wavered in the second half and the goals per quarter decreased across the match, making it hard for South Africa to keep up with Australia.

More changes came in the second half for Australia, as Sophie Garbin entered the match at goal shooter, pushing Bueta out to goal attack and Steph Wood to the bench.

The calmness of Garbin in just her second test was easy to watch, her ability to hold space and her confidence playing in front and behind Phumza Maweni was welcomed in the Aussie attacking end.

While the change in combinations under each post certainly helped, it was the absorption of the early Proteas' pressure that allowed the Diamonds to push out to a healthier 13 goal lead by the end of the third quarter.

The final term again bought a host of changes, Price took over at centre, Moloney was tested at wing defence and Cara Koenen made it into goal attack, while the Proteas also switched around their squad throughout the second half.

However, it was down to the coolness and calmness of Garbin in goal shooter that saw the Diamonds slide out to a smooth 20 goal win over the Proteas.

Speaking post-match, Head Coach Stacey Marinkovich commented on the pressure the side was under and how they settled into the second half.

"I think it’s been a progression, I think whoever was out there in the first half was going to have to absorb what South Africa was able to put out there and I think, for us, we were able to keep running and attacking the opposition," Marinkovich said.

"So I thought that the openings came with just a difference in variation, we were able to play the ball with some aerial space towards the end of the game, but then we can also play the hard, flat ball.

"Defensively, I think it was the repeated efforts and the girls just continuing to build their understanding of what they’re trying to do."

It's a new era in the Diamonds' camp, as Marinkovich used all 12 players in her match day squad and moved players around to find strong combinations.

After Garbin moved into goal shooter, she played with both Bueta and Cara Koenen in the circle. There were also three defensive combinations trialled and multiple variations of the midcourt, highlighting the depth and confidence in the Diamonds' squad at present, despite such little time together.

"We’ve been trialling those combinations at training so they’re very comfortable... we’re working out how we can impact the game and be able to make a presence coming off the bench as well," Marinkovich said.

"I thought we got a lot of impact when we made the changes."

Reflecting on that first series as head coach, Marinkovich accepts the painful losses at the March 2021 Constellation Cup were for greater gain, as almost 12 months later the Diamonds reap the rewards of blooding new players, especially at the shooting end.

"To be honest, I think [Constellation] Cup was a great experience, we got a lot of ball through our shooters and they’ve got another year under their belt at SSN and really dominating in their different teams.

"So, the biggest thing for us is actually getting the balance of a moving circle and playing to the strengths of the girls in their partnerships and now that they’ve started to have a bit more time together, a bit more role clarity, they’re really attacking the game and they’re very accurate under the post."

As for the midcourt, Liz Watson was rested for this match and her Vixens' teammate Kate Moloney started in centre. However, finding the balance with the five midcourters in this team, and the rest watching from home, in Australia will be key leading into the Commonwealth Games and as always, Marinkovich sees the positives in these difficult decisions.

"It’s obviously extremely competitive, we’ve got some great depth and we’ve certainly got some real strength still back in Australia.

"And that’s the beauty of the squad, that they all push each other. Kate’s been training extremely well, as have the others, so sometimes we’re looking at match ups, looking at our rotations and I’m sure they’ll continue to battle it out, but what they do is they push each other for the benefit of the team."

Aryang became Diamond number 184 when she stepped onto court in the second quarter and she did not look out of place at all, helped by the familiarity of playing alongside her Fever teammate, Bruce.

Aryang is the first player of African descent to play for the Australian Diamonds, and is another Western Australian taking the court, which pleased Bruce.

"I’m so proud of her. I think I was celebrating more when I got to see her run onto court.

"Sunday and I have a really good relationship and a good partnership out there, but it’s such an exciting time to get to debut and I think it’s really special having another West Aussie get her opportunity."