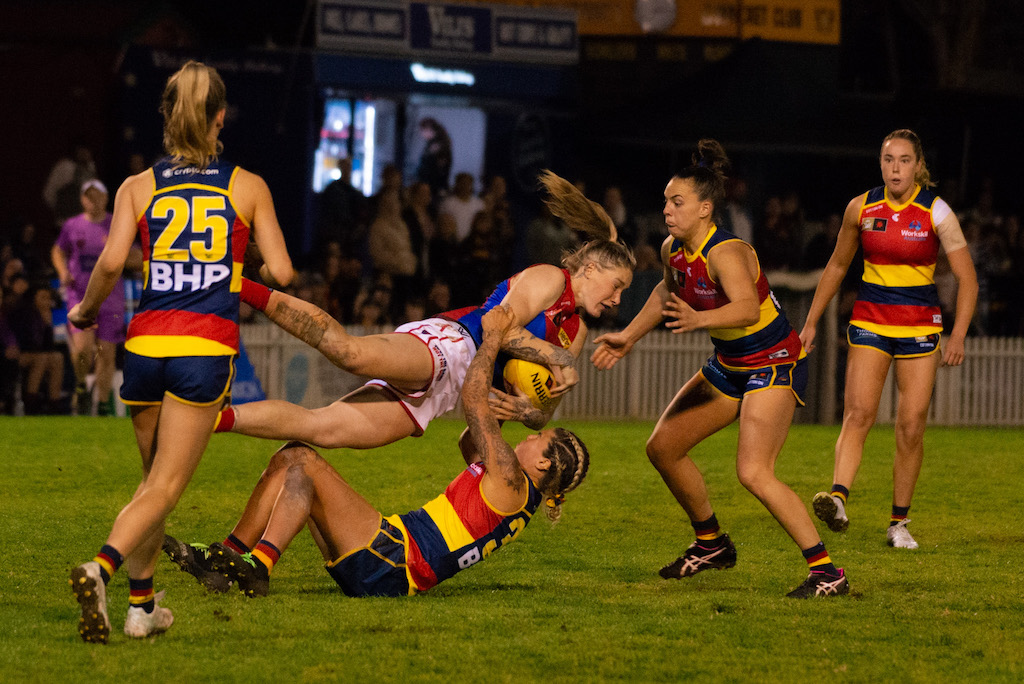 In the grand final rematch, the Adelaide Crows and Melbourne Demons picked up right where they left off. Though, this time it was the Demons who kicked away for revenge in an 18 point win.

In the grand final rematch, the Adelaide Crows and Melbourne Demons picked up right where they left off. Though, this time it was the Demons who kicked away for revenge in an 18 point win.

Just 139 days after they met at Adelaide Oval for the AFLW Grand Final, the Melbourne Demons reversed the result from that day, downing the Adelaide Crows by 18 points at Glenelg Oval on Friday night.

While you can’t exactly avenge a grand final loss in Round One of a new season, the Demons will take plenty of confidence and learnings from this victory - especially given their three previous losses to the reigning premiers over the past two years.

The two sides went in hard from the first bounce, showing they will once again be among the contenders in season seven.

Picking up right where she left off, leading goalscorer from Part A of season 2022, Ash Woodland, kicked the first to get the home side away to a positive start.

It wasn’t her only goal for the night, finishing with three crucial majors to keep the Crows in the contest.

A stunning bounce off the boot of Kate Hore got the Demons on the board. Evading the hands of the Crows’ defenders, the major put her side ahead at the end of the first quarter.

Tayla Harris went off a step from 45 metres out in her 50th game, and nailed it. The key forward also spent more time in the ruck, something fans can expect to see a bit more of in season seven, as the Demons try and bring her into the game in different ways.

Tyla Hanks and Daisy Pearce, who was playing a defensive-forward role to stop the Crows’ intercept game, put the Demons in front by 11 points, late in the third.

Danielle Ponter looked down and out after a tackle in the forward 50 in the opening minutes of the last quarter, but she bounced up after a few seconds, gathered the ball and kicked truly to get the Crows off to the start they were after.

However, a strong mark and goal by Eden Zanker put the Demons out by more than two straight kicks, before Karen Paxman sealed the win with a minute to go.

Eloise Jones was in everything for the Crows, especially in the first half when 50th gamer, Anne Hatchard (24 disposals, six tackles, four clearances), and Ebony Marinoff (14 disposals, 10 tackles) were not yet at their blistering best.

At times Chelsea Randall (17 disposals) started in the middle, and Abbie Ballard went to the contest around the ground too, but whatever the Crows tried, the Demons were able to get the ball on the outside and transition it with a handball game.

Down 72 disposals - 53 of those handballs - is simply not sustainable for the Crows, if they want to be competitive with the top sides this year.

The midfield depth at the Demons was on full display. Paxman finished with 24 disposals, though, it was Eliza West, who just continues to get better, at the top of the count with 25.

Olivia Purcell (22 disposals), Hanks and Hore (both 17 disposals) also spent time in the middle and came up with plenty of the football.

Life at the Crows without Erin Phillips, Justine Mules and Ange Foley is different. A Phillips-less forward line lost its structure at times, and the loss of three key leaders is never easy.

And it’s a “reasonable question” to ask about life after Phillips’, given tonight’s four goal effort from the side, said coach Matthew Clarke.

“I thought they (Melbourne) did control the air down there, but at times we looked good.

“I don’t think we gave our forwards the best opportunity, at times we sat the ball directly on the head instead of protecting it, and just getting a bit of angle to work with.

“So, look, that’s a reasonable question, but I think we’ve got enough talent down there to hit the scoreboard.”

The Demons, on the other hand, weren’t targeted in the same way by the expansion sides - especially new Victorian teams Essendon and Hawthorn.

Instead, tonight, it was season six recruit Olivia Purcell who was back to breaking her way through tackles and competing as a key midfielder.

Purcell arrived from the Geelong Cats ahead of season six, and coming off an ACL injury in 2021, her midfield minutes were light. But in the season seven opener that had changed.

“I think Olivia Purcell, coming off the back of an ACL last season, I thought did a really good job,” Melbourne coach Mick Stinear said after the match.

“She’s had another couple of months of preparation, and she’s been able to play a lot more minutes in there (the midfield).

“She’s really strong and clean and a good competitor.”

It was a very physical contest, though, both coaches confirmed while there were no injury concerns, there will be plenty of bruised bodies after the season opener.

The Crows will look to bounce back when they travel to the Swinburne Centre on Saturday morning to face the Richmond Tigers. The Demons will return home to host the North Melbourne Kangaroos at the MCG on Friday afternoon before the men’s qualifying final.