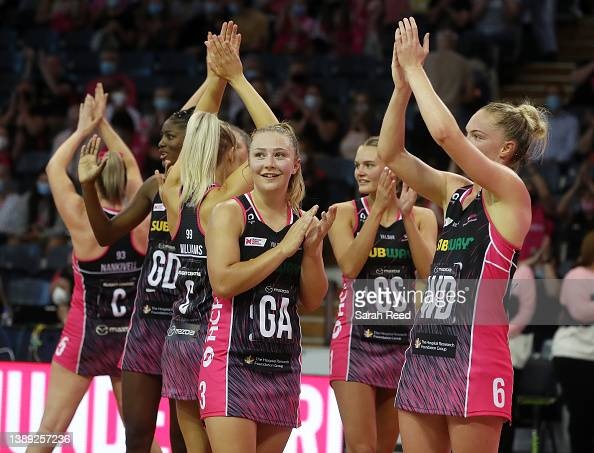 Decimated Giants Lose Out Against Thunderbirds

The Adelaide Thunderbirds took charge on Sunday to claim their second with of the season against a depleted Giants.

Decimated Giants Lose Out Against Thunderbirds

The Adelaide Thunderbirds took charge on Sunday to claim their second with of the season against a depleted Giants.

With both teams getting a win in Round One, one team would walk still undefeated in the 2022 Super Netball Season.

The Giants have had an interesting week, after being denied their request to postpone today’s match. With several of their key players out due to COVID-19, the team recruited West Coast training partner Chelsea Pitman for the game.

“I’m not naive enough to know that there are massive complications in deferring a game.

“We more than exceeded the requirements that were in the protocols that the clubs were given. So it was our job, I think, to apply for the game to be postponed.

“I think the League has made a statement now. It doesn’t matter what happens, the game will go ahead. If you can’t fill it from your team or your squad, you go to the supplementary player list.”

The teams met once during the Team Girls Cup and fought tooth and nail. The Thunderbirds emerged victorious, 38 - 37. In 2021 the Giants had comfortable wins against the Thunderbirds in their two meetings.

The Thunderbird's line-up remained unchanged from last week, whereas the Giants were using players in irregular positions due to COVID. Very much the underdogs, the Giants started off with the centre pass and converted, even getting an early turnover to put them in the lead.

The play was a bit scrappy by both teams in the first quarter, with sloppy ball skills losing them the ball. When the ball did get to the Thunderbirds shooting circle, Potgieter and Dwan were able to get the ball in, both sitting at 80 per cent.

Jo Harten sunk the first Supershot, marking the score 8 all. Before a timeout, Harten made another Supershot with ease. Matisse Letherbarrow also displayed her long-range shooting skills, with back-to-back Supershots.

On the other side of the court, Shamera Sterling was putting in the work, trying to keep the Giants away from closing the margin. At the end of the first half, she led both teams in Nissan Net Points, at 47.5.

Lauren Moore was making her club debut at wing defence, not her usual position. Despite this, she made vital intercepts that interrupted the Thunderbird's flow. Moore was not originally expected to play today’s game after missing last week’s due to COVID-19.

At half-time, both teams were in it to win, with 25 goals apiece. Possession reflected this, with 47 per cent to the Thunderbirds and 53 to the Giants.

Captain Hannah Petty was also being a menace on the court, all over the Giant's ball. In the first half Petty was equally Sterling for gains and intercepts, three and two, respectively.

Halfway through the third quarter and the goals were starting to flow for the Thunderbirds. With Georgie Horjus had moved from wing attack to goal attack and her connection with Lenize Potgieter was clear.

In the final five minutes, the Giants called a tactical time out, bringing on Pittman at wing attack. There were scattered cheers from the Adelaide crowd when she first got the ball in hand, no doubt familiar with the player after her tenure at the Thunderbirds.

The Thunderbirds were starting to get away from the Giants, with a 15 to nine quarter. This put them six points in the lead at halftime, 40 - 34.

In the final quarter, training partner Angelina Frketic was brought out into goal attack for her debut. At the other end, the Thunderbird's goal circle were increasing the margin, hitting double digits with nine minutes to go.

As the quarter wore on, this deficit increased despite Jo Harten’s Supershots. At the final buzzer, the Thunderbirds were 13 goals up, ending the game 56 - 43.

The player of the match was Shamera Sterling, with five intercepts, five deflections and fourteen gains.

The Thunderbirds won three of the four quarters, losing the first 13 - 15. Post-match Coach Tania Obst commented on this, saying

“We were actually a little bit wasteful with the ball and we got a little bit caught up in some of the defensive structures that we potentially weren't expecting from the Giants.

"It is about maintaining that possession of the ball, and putting it through once we do get it.

Overall, Obst seemed happy with the team's performance, sharing "We knew the Giants were not going to be easy, they were gonna be coming out hard. We were able to push away in the end, which was pleasing."

For the first time in SSN history, the Thunderbirds are two for two.

The Melbourne Vixens will host the Giants on Saturday at John Cain Arena. Thunderbirds will close Round Three with the Lightning at Netball SA Stadium.