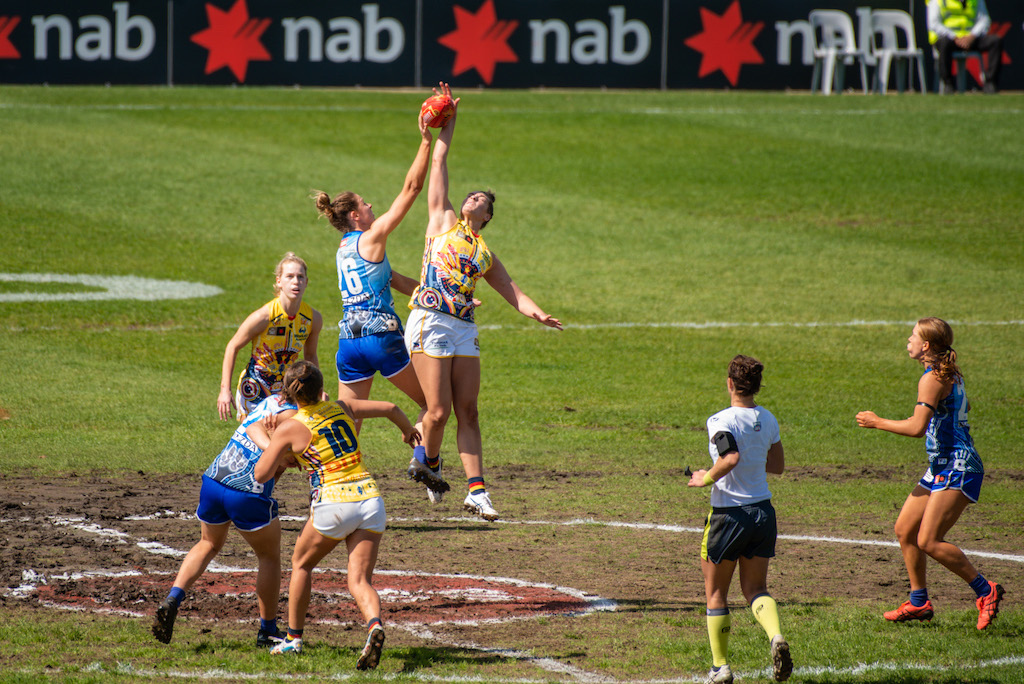 The Adelaide Crows have secured an important win over the North Melbourne Tasmanian Kangaroos, with forward Danielle Ponter kicking two goals in the 14 point victory.

The Adelaide Crows have secured an important win over the North Melbourne Tasmanian Kangaroos, with forward Danielle Ponter kicking two goals in the 14 point victory.

Getting on top of the contest after a quiet first quarter, the Adelaide Crows have held the ball in their forward half and kicked two goals in an exciting final term to take a crucial win.

The Kangaroos showed early the value of getting the ball deep inside 50, as Alice O’Loughlin, who came back into the side for her first Season Seven game, spun out of a tackle and kicked the first for the afternoon.

Another good entry was marked by Emma King, who proved strong in the contest. She sent it long to the top of the goal square and, off hands, Vikki Wall came up with the snap and scored her first AFLW goal.

Those two goals were the only in the first, giving the Kangaroos an 11-point lead at quarter time. Their defence held up nicely when the Crows’ had their few opportunities inside 50.

The Crows got on the board through Hannah Munyard in the second quarter; a tight angle shot became an easy major from the goal square, following a 50-metre penalty.

Wall left the ground after she was crunched in a contest but returned to the field before half-time. However, a knock to Amy Smith saw her ruled out of the second half with concussion.

She was emotional one the bench and will be assessed ahead of next week. North coach Darren Crocker said the fact she didn't come back on "would probably mean she's going to miss a week."

Danielle Ponter hit a beautiful check side goal from the northern pocket to make it a one-point ball game heading into the long break.

The scoring all dried up in the third quarter, with just two behinds to the Crows and one to the Kangaroos.

It was all square going into the last term, but after a cracking shot from distance by Madison Newman was rushed through, the Crows took the lead for the first time since the opening minutes of the game.

Ponter scored her second for the day, evading three defenders and kicking cleanly for a seven-point lead to the Crows.

Finally, Caitlin Gould, who had battled really well all day against the Kangaroos’ ruck duo of Emma King and Kimberley Rennie, scored the sealer.

North’s Jasmine Garner was at her dominating best in the opening half, giving the Crows “some grief”, said Crows' coach Matthew Clarke after the game.

“[North] certainly had their moments, and they've got some high-end talent running through the middle.

“I thought Garner was giving us some grief, particularly in the first half,” which is why the Crows then sent captain Chelsea Randall, who was already playing strong minutes in the midfield, to a tagging role.

Speaking on the second-half match-up, Crocker thought Garner was still fairly effective, despite the interesting move from the Crows.

“They went to Garns (Garner) after half-time and Garns, I thought, still had a pretty strong game; she worked hard.

“It's interesting because we thought, even in the first quarter, that Randall was dropping back and causing us a few headaches, just being able to drop back as a defensive mid. So it was interesting that they did that after halftime.

“We obviously were going to [Anne] Hatchard in the first half and lost Amy Smith, which meant that we had to shuffle the magnets around a little bit.

“I still thought Jasmine had a strong game but probably was quelled by Randall."

The midfield work to get on top and take control of contested possession in the final quarter was also commented on by opposition coach Crocker, but Clarke was just really pleased at the spread of the workload.

“I thought Garner probably had the better of that midfield battle in the first half, but in the second half, Ebony and Anne, and Chels and Teah [Charlton] and a little bit of Abbie Ballard - that ability to spread the load and work collectively to get an outcome was good.”

Today’s clash was played on Kaurna Land and ahead of the first bounce, Aboriginal dance group ‘Dusty Feet Mob’ from Port Augusta performed.

The Crows once again pulled on the club’s Indigenous guernsey, previously worn in Season Six and in the AFL men’s and SANFL competitions during 2022. Designed by Eastern Arrernte man Pat Caruso, it features an Aboriginal adaptation of a crow, which wears the Kaurna shield on its chest.

Ponter was the Crows’ only First Nations player on the field, shining once again in Indigenous Round.

Post-match, Clarke noted what an exciting role she plays in the Crows’ forward line and how she combined with Ash Woodland today.

“Yeah, she (Ponter) was significant. Yeah, clearly the snap from the pocket, well, not the snap, the checkside or the banana, which state are we in? Checkside? Very handy goal, but I thought her contest generally, and I thought also Ash Woodland's contest, was outstanding.”

The jumper honours the ‘Marram’ - meaning kangaroo in Woiwurrung, the language of the Wurundjeri people.

Mia King, Jawoyn woman and Kangaroos midfielder, pulled on ‘Marram’ for the first time at Unley Oval today and also looks forward to wearing it next weekend in her hometown of Launceston.