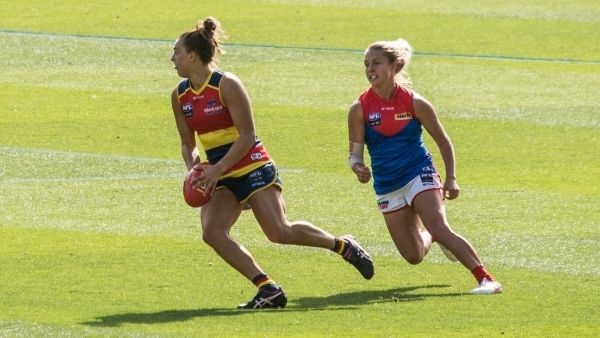 The Adelaide Crows are flying starting the season with a 4-0 record with more players standing up to make an impact a reason for the crows success.

The Adelaide Crows are flying starting the season with a 4-0 record with more players standing up to make an impact a reason for the crows success.

The Adelaide Crows are flying at the moment having started the season with four wins in a row afterbeating Melbourneon the weekend.

Adelaide Superstar Ebony Marinoff spoke to the media during the week about the clash against Melbourne and the Crows excellent form to start the season.

The Crows brought the pressure against Melbourne over the weekend but it was scoreboard conversion that could have been better.

"We wanted to start the game with immense pressure because we know Melbourne don’t love the pressure and we certainly found that out throughout three quarters," Marinoff said.

"Kicking I think was 4.11 isn’t what we want to be kicking, I mean we should have kicked a few more goals but we’ll work on that on the training track.

"Melbourne are a great side and we knew what they were capable of so to get the win is great but that fourth quarter our pressure was still ok, but Melbourne was able to get the ball in their hands and get a couple of quick inside fifties which gave them opportunities to kick a couple of goals."

Marinoff has had a great start to the season playing a key midfield role for the Crows but she said a huge part of the Crow's success is the players that have stepped up when called upon.

"I don’t know if it’s my best season, but I guess being able to be consistent week in, week out. I think we’ve got a very good balance of girls impacting games this season and is probably what we potentially lacked a little bit last year,  we were still trying to find our feet.

"I guess to be able to see the likes of Madison Newman coming in on the weekend, Chelsea Biddell has been amazing down back, Abbie Ballard helping out through the midfield and up forward and the evolution of Chelly Martin [Rachelle Martin] and Hannah Button.

"It’s great to be consistent and I certainly know what I have to do to help this team be successful but the pleasing thing to me is we’ve definitely had a heap more contributing and helping us win the games."

There have been Crows players stepping up and making an impact, especially in the midfield to take the load of the likes of Marinoff and Anne Hatchard and to allow for Erin Phillips to spend more time up forward.

"I think it’s just more girls having trust and belief that they can really impact the games, it certainly doesn’t take away from our game, we keep doing what we’re doing week in week out.

"It just means that they can have a bit more of an influence on the game and I guess that’s just how we’re going to evolve as a team and have strong depth.

"We’ve had a few ins and outs with the health and safety protocols and everyone that’s come in has really impacted and they just haven’t in and made up the numbers they’ve actually really impacted the game and helped us get the four points each week."

While they recognise that there is still a long way to go the vibe around the club is great with the crows remaining undefeated as we reach the halfway point of the season.

"We’re a really special bunch, I feel really privileged to be a part of this group as well as our staff and everyone that are embedded in our culture, we certainly have that mentality of one in all in so it’s great to have girls come in and impact this season."

"We’re up and about but we certainly know it’s a long season but it’s just been super exciting to be a part of wins early on and like I said early on being four and 0 is great because we’ve done so much work."

The Crows will head to Melbourne to take on Carlton and despite the Blues only having one win so far this season the Crows aren't counting them out.

"One of our biggest strengths is taking it week by week and we knew that our draw was quite hard and challenging but Doc [Matthew Clarke] always emphasises that you’ve got to be the best and play the best to be the best.

"We actually have had some really amazing games against Carlton and since the inaugural year and it’s always a battle.

"Sometimes you come up against teams and no matter how well they’ve been going you just know you’ll be in for a fight. They love contested ball they have Maddy Prespakis in there who is an absolute gun and down forward they’ve got the likes of Nicola Stevens and Darcy Vescio and then well led by Kerryn Harrington in the backline so.

"It’s going to be a really good challenge for us because they love the contest as do, we and their game is based around the contest, and they do have that X-factor.

"We’ve just got to make sure that we’ve got our pressure up like we’ve had all season so it’s just being able to sustain that for four quarters on a big ground in Ikon park."

The Crows will face Carlton on Sunday afternoon with the game kicking off at 3:10 pm at Ikon Park as they look to keep their undefeated streak alive.