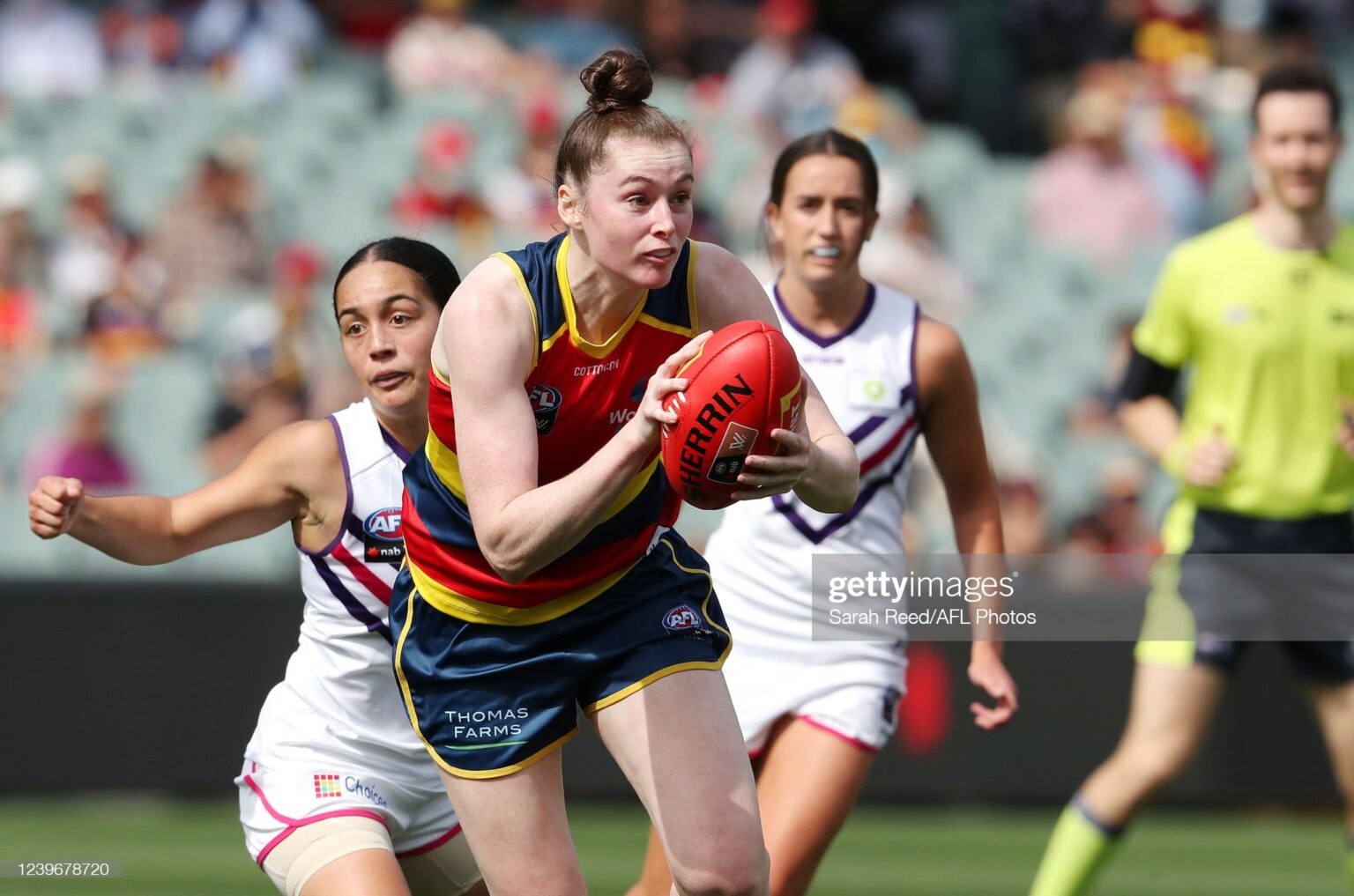 Crows swoop down past Dockers and into AFLW Grand Final

The Adelaide Crows were good enough to beat the Fremantle Dockers by 14 points to book a place in a fourth AFLW grand final next Saturday.

Crows swoop down past Dockers and into AFLW Grand Final

The Adelaide Crows were good enough to beat the Fremantle Dockers by 14 points to book a place in a fourth AFLW grand final next Saturday.

The Adelaide Crows defeated the Fremantle Dockers in a hard-fought AFLW preliminaryfinal 40-26 as they booked a place in the grand final for the fourth time.

The minor premiers were pushed by the Western Australians all the way through, but the class and experience of the home team came through in the end.

Erin Phillips had the Crows on the board first, with her big game experience allowing her to hit the ground running, with a clean snap on goal from the forward pocket.

The Crows won the territory battle early, but it was their well-set defence that played a key role in keeping the Dockers at bay.

Part of that defence, and playing her 50th game for the club was Sarah Allan, who spoke toEdge of the Crowdafter the siren.

"It's amazing to be able to do it with Stevie [-Lee Thompson]," Allan said.

"We've been here from the start together, and I couldn't think of someone else I'd prefer to reach that with."

Thompson had 15 disposals and a goal in her milestone game, as she played a key role for the Crows on the ball.

Allan spoke about the challenge that the Crows defence faced throughout the game.

"They brought it to us - they were great out there but credit to our backline, we held as well.

"We just kept the pressure up and did what we could to minimise it as much as possible. Obviously, they still kicked a few goals, but I was proud of how we finished the game."

It was important for the Crows in their preparation for the Dockers that they considered what the Dockers could do, but Allan explained that the Crows never lost sight of themselves either.

“Just understanding they’re a strong highly skilled team that can run the ball, and understanding that they can get a run, but we played to our strengths, and we can run as well out games, so we made sure of that.

“With the extra week, it felt like a bit of a break and then to come into that, but I just kept it simple and knew I had to play my role.

"At the end of the day it's just another game, but it's obviously nice to celebrate."

It was important that as the Crows did that, they held their nerve, and that every player played their role.

"To win the game, it's a super proud moment, but in a way, it's a relief that we got over the line. Those games can be high pressure, and really it can go down to the line.

"We got over with a little bit at the end, but it was quite a close game and you have to be willing to fight to the end, and we did that.

“There was a player in every single area. Everyone played their role. That is what we do. We have players in every area of the ground.

"Obviously to have Ash [Woodland] and all our forwards finishing off their goals, and to have people in defence, like [Marijana Rajcic], [Danielle Ponter] and Chels [Randall] down back. Chels just came in and slotted in well and set the standard with that tackle in the first quarter.

"She set the standard of how hard we were going to play today."

The Crows' win puts them into a fourth grand final, and a home grand final.

Allan was keen to explain how special it was for the Crows to play on such a famous ground.

“It's just amazing to play at Adelaide Oval, even to train, especially for the younger ones who haven’t been here before, and then to be here with our fans, its a great atmosphere and we love playing at Adelaide Oval.

"It just continues to suit us well with our game style. We love playing on Adelaide Oval, so it's amazing to run out there every chance we get, we don’t take it for granted.

"We want to make the most of the honour of playing on it."

“I think we just love the pressure of Adelaide Oval. We're a team that loves pressure, so we make the most of it, and to bring another team on and have our fans there - we love playing under the pressure of it."

As for the Dockers, they will be disappointed to have fallen short at the final hurdle, but there was no consideration of giving up.

Hayley Miller had 26 disposals, and Kiara Bowers had 24 of her own. Bowers also had 10 tackles in a Herculean effort to keep the Dockers in the game.

In the end, the class of the Crows was too much to suppress, and they were never able to beat the Crows' defensive structures.

The Adelaide Crows will host the Melbourne Demons in the AFLW Grand Final next Saturday.