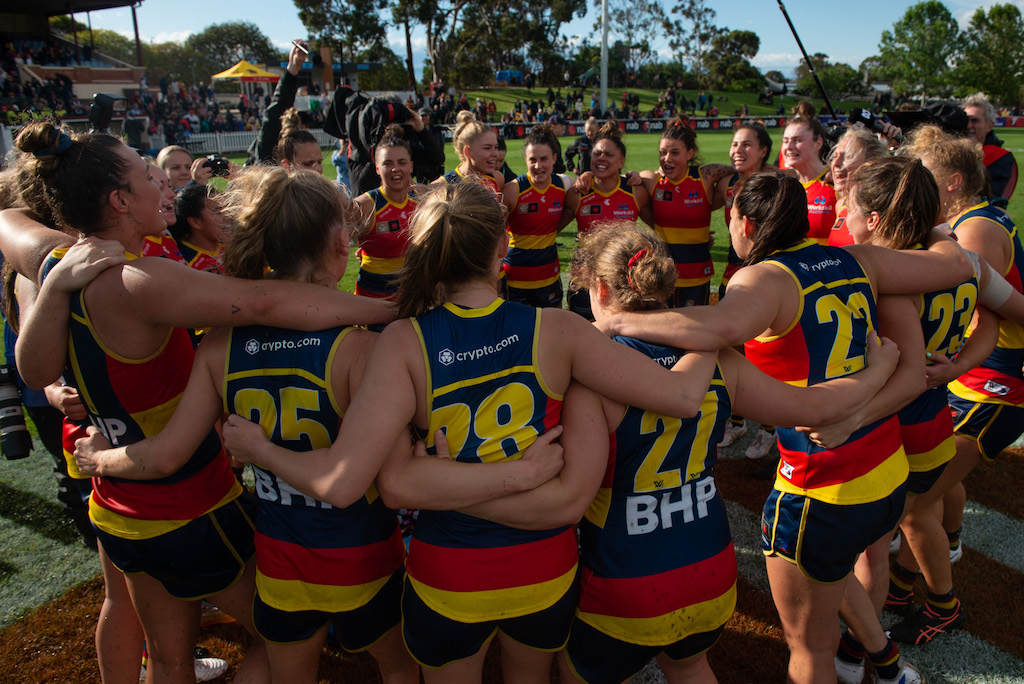 Delayed twice due to lightning, the Adelaide Crows have prevailed in a 12 point win over the Collingwood Magpies at the Unley Oval swamp.

Delayed twice due to lightning, the Adelaide Crows have prevailed in a 12 point win over the Collingwood Magpies at the Unley Oval swamp.

Torrential rain, lightning storms and blustery winds did not slow the work rate of the Adelaide Crows, who triumphed over the Collingwood Magpies to secure their place in a preliminary final.

Saturday’s semi-final conditions were described by Crows’ coach Matthew Clarke as a “truly bizarre day” and they were exactly that.

After an initial 30 minute delay, the first quarter was played in near darkness, as the oval lights made little difference to the ominous skies.

Torrential rain, blustery winds and more lightning caused another delay, with a near 45 minute break between the first and second quarters.

The following three quarters were played in fairly dry conditions, on a soaked oval surface, with a strong wind favouring the northern end of the ground.

Most impressively, 2476 fans braved the horrific conditions and most stayed throughout the delays, to watch the two teams fight for the chance to play Brisbane.

“Gee, we had everything today, didn't we? Stop, start, on, off the field, everything happened.

“We'll probably look back in a few years time and have a bit of a chuckle about it, but it's just one of those day, and it's tough conditions for both teams.

“I thought it was a cracking game of footy, considering conditions and the way the day rolled out.”

Clarke was “super proud” of his group today and their relaxed approach to the changes.

“We actually had our head of high performance was away today, so we had one of our younger guys filling in the role, and he had to run seven warm-ups in his debut.

“And then obviously after the torrential downpour, in the second half, it was just tough for both teams, it was basically a ground of small puddles and it was just a grind.

“But to get the outcome was really significant for particularly some of the younger players in there, they've experienced that, was pretty unique.”

The win keeps the Crows chances of two in 2022 alive.

The Magpies’ loss marks a fourth season in a row they’ve made it to the finals series, but have failed to progress past the best teams in the competition for a chance at the premiership.

“It's another one, isn't it?” rued Symonds, after the loss to the Crows.

“Behind closed doors, we've had a real battle this week.

“We were pretty sore and banged up after last week and a number of players were under the pump and they got themselves up to the game, and the way they fought it out, particularly in the second half - I'm extremely proud of the group.

“And whilst we didn't get the win today, the way they actually attacked it and just kept on fighting, we're forever proud.

“They're a group that will fight all the time, they're very close and they work together, and gave the Crows a start and that was too much.”The first bounce was delayed by 30 minutes due to lightning in the area and even as play did get underway, the skies darkened once again.

Eloise Jones did get the crowd up about with a goal 20 seconds into the opening quarter, Danielle Ponter’s opener last week just one second faster.

Speaking of the moment, Clarke asked who was leading the ‘fastest goal’ after today and said, "it was a nice moment.

"Obviously, when Chels (Randall) went out, we just had to shuffle things around a bit and so Eloise (Jones) went forward.

"Clearly she's played that role earlier in her career, and I thought it was an impactful game. It wasn't really ridiculously my possessions, but she's an impact player."

Lisa Whiteley kicked the Crows’ next goal, to continue a fast start by the home side in worsening conditions.

As the quarter came to a close, the winds picked up and the skies darkened to almost night-like. The rain started falling, and it was soon too dangerous to be out on the park.

Players and umpires came from the ground, as the conditions worsened and the lightning returned.

Another wave of Saturday’s storm passed through; torrential rain smashing fans who remained on the boundary huddled under tarps and umbrellas.

Play was officially delayed for another 20 minutes due to lightning within 10 kilometres.

It was more than 40 minutes after the siren to end the first quarter that play resumed for the second, the skies lightening, though, the new problem became surface water on the ground.

Despite the puddles, Collingwood found its first shot at goal after the restart. Chloe Molloy took a sliding mark and had a crack at the goals, but was unable to make the distance.

The ball might have plugged every time it got kicked or hand-balled forward, but some Anne Hatchard magic managed to put Adelaide out by a handy three goals at half-time.

Eliza James kicked the Magpies first major, six minutes into the third term. James crumbed off the marking pack at the top of the goal square and put it on the boot quickly enough that it evaded the defender’s hands.

Late in the term, Sabrina Frederick had a chance to make it a one goal game, but missed to the far side and a free kick was awarded to Chelsea Biddell.

With one quarter remaining in the semi-final, the Crows led by 10 and had the wind in their favour for the last.

The Crows went forward multiple times in the last term, but could only manage a couple of behinds, and the Magpies struggled going into the breeze, as the clock ticked down at Unley Oval.

With that loss, the Magpies season comes to a close and post-match, the players were feeling it.

Symonds said his message to the players was, “don't hide the disappointment.

“I don't let them just walk away satisfied by just being competitive. If we're going to grow and become a really great team, they need to hurt, and they're doing that.

“But I also spoke to them about how proud they are, we kept on fighting.”

Adelaide’s attention now turns to Brisbane and a quality match-up over the seven seasons.

The tough conditions of Saturday’s contest will have been taxing on the bodies that now have to rock up again in six days time, to face Brisbane on Friday night.

However, Clarke believes the extra breaks during the game might have helped their situation.

“Even though it was obviously tough conditions, because we had so many breaks it probably wasn't as taxing as it potentially could have been had it been a continuous game.

“So physically, I think we'll be okay.

“But we're at that point in season where your training weeks are fairly managed anyway, so I think we'll come back physically pretty well.”

Adelaide also has a clean bill of health following the game, but the club will have some big calls to make when it picks a squad for the preliminary final trip.

The Adelaide Crows now play the Brisbane Lions in a preliminary final, next Friday at Metricon Stadium, 6:40pm AEST.

Earlier on Saturday, the North Melbourne Tasmanian Kangaroos beat the Richmond Tigers, to book their place in the other preliminary final. They now face the Melbourne Demons on Saturday at IKON Park, 3:10pm AEDT.