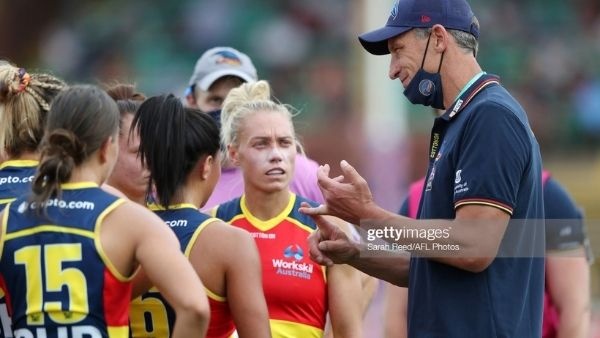 The Adelaide Crows will be looking to bounce back after a one point loss against the Bulldogs last weekend but won't make any drastic changes.

The Adelaide Crows will be looking to bounce back after a one point loss against the Bulldogs last weekend but won't make any drastic changes.

It was a different week for Adelaide this week with the side coming off its first loss for the 2022 AFLW season but the Crows aren't making any drastic changes as they prepare to face the Giants on Saturday afternoon.

Adelaide Coach Matthew Clarke and Crows midfielder Hannah Munyard spoke to the media during the week as they reflected on the loss and started to look forward to this weeks game.

There is at least one change for the Crows coming this week with Brooke Tonon set to make her AFLW debut this week.

"We are going to create one opportunity so we'll have a debutante this week in Brooke Tonon who'll play her first game for the club, which is really exciting.

"Brooke will play her first game, she kicked six goals one couple of weeks ago but she's also trained as a back with us quite a bit so we'll probably start her across half-back."

Tonon has shown her versatility throughout the pre-season playing at both ends of the ground which will put the crows in good stead going forward.

Throughout the preseason she trained at both ends of the ground and even a little bit on the wing. So we hadn't really pigeonholed her in any particular position.

"We just sort of see what you've had in all areas of the ground and obviously, what we've seen is a young player who's worked amazingly hard, hasn't put a foot wrong and clearly has demonstrated some really good form at SANFL level.

"So we're really excited that she's going to get an opportunity. Debuts are always interesting and you are never 100 percent sure which way it's gonna go but she's a fairly calm and measured sort of individual. So I think she will handle the occasion well."

With the game against the Dogs being a close one in the end, the Crows were able to take some learnings out of the last minute of the match which will hold them in good stead if they have another close match again this year.

"They started to throw the numbers behind the ball and so we did a good job of equalising that. We brought some of your defenders around and made it a contest. I guess on reflection that last frantic 30 seconds or 40 seconds.

"I guess initially we were sort of thinking well let's just get a point and then see if we can then turn the ball over again, get another one or goal because we're so close to the goal line but when we look back at it, you saw that the number distribution was pretty heavily weighted towards I think there was all pretty much all 32 players inside 50.

"Perhaps we could have tried to shift the ball back to go forwards in that last phase but very easy to say with the benefit of hindsight so it was a unique situation.

"We did have a look at it because you know, you never know it might come about but ultimately, you know little bit luck here there we might have got one over the line."

A fast start put the Crows on the defensive early on in the match but despite that, there won't be too many drastic changes happening.

"We let ourselves down for a brief period and then our defensive system and defensive method, we just had we had three or four lapses were just little things we need to tighten up but an area of the game where we've been really strong.

"So pretty important not to throw the baby out with the bathwater. We just need to, you know, revisit some of the things which make us good."

One positive for the Crows in the match against the Bulldogs was their ability to stage a comeback after the dogs were able to pile on three goals at the start of the match.

"One of the positives out of the game was the capacity to respond within a game. So you know, we were three goals down very early then I think they kicked a fourth in that first quarter but from that point on, the team really came to work and stuck out the task right till the last second.

"As we saw there were opportunities late in the game to pinch it so I don't think there's any doubt about the want, I think it was demonstrated already last week.

"It's just a matter of playing the way we want to play from the get-go."

The first goal of the game for the Crows was from Munyard, with that goal being her first in the Crow's colours after making the move from the Bulldogs in the 2020 trade period.

"So obviously I'd previously played for the bulldogs and I kicked my first AFLW goal with them," Munyard said.

"So to kick my first for the Crows in the other colours was pretty awesome, it was an amazing feeling. Yeah, obviously super happy but disappointed with the final result."

The Crows will be looking to bring back the pressure that they have been so well known for across this season when they face the Giants on Saturday afternoon.

"Just bring our pressure, I think the first like the opening five minutes of each quarter are really important and I think they really lead the game and they show how it might play out.

"So I think once we know the first siren goes and the ball goes up is when we have to hit the intensity of the game has to be as best as we can possibly do it and I think you know, that doesn't matter who we play.

"So obviously going to play GWS this weekend, we just got to play it as if it was a grand final is how we go into the game."

Adelaide will be heading out east as they face the GWS Giants at Henson Park on Saturday at 3:10 pm AEDT.