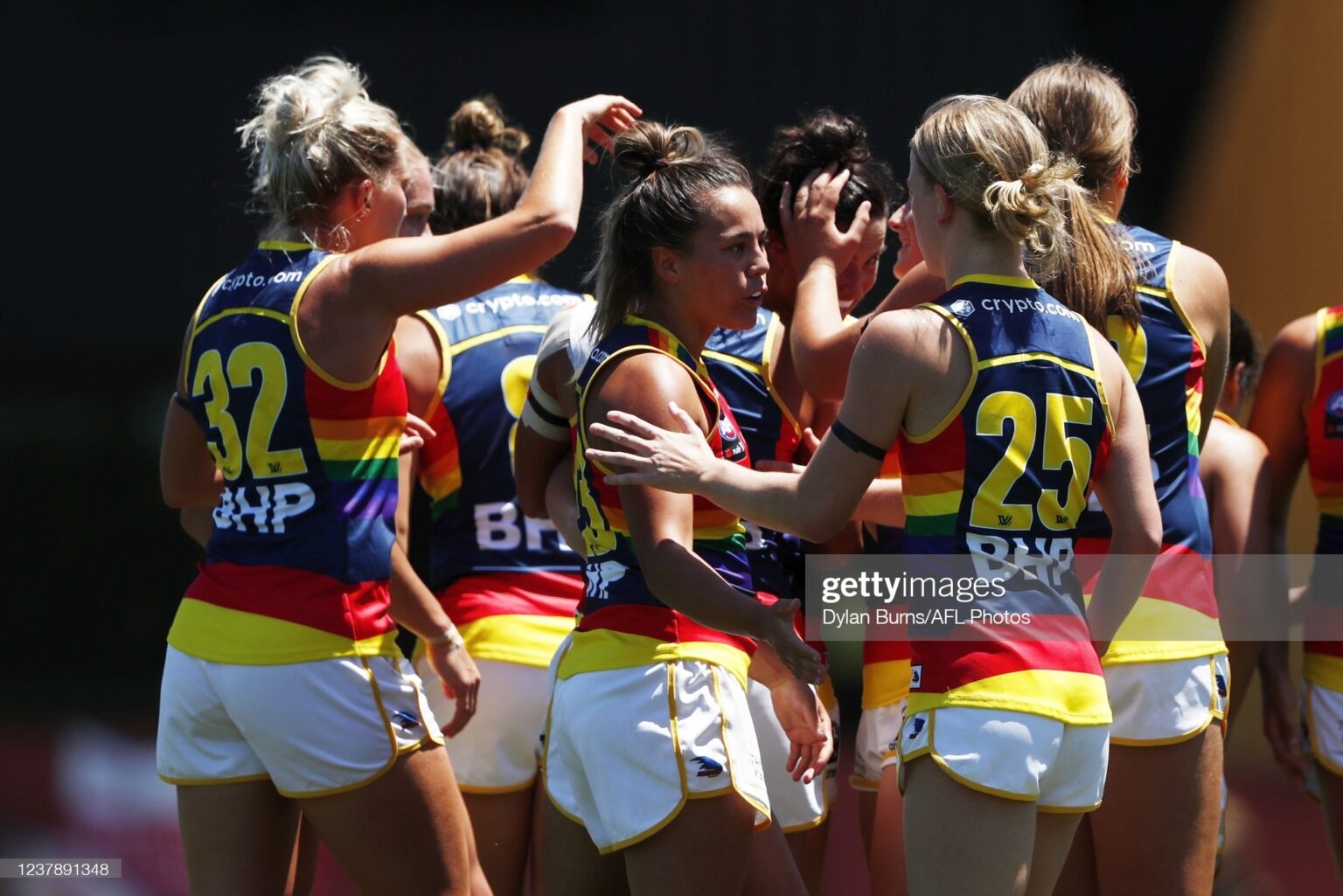 The Adelaide Crows continued its undefeated start to the AFLW season with a powerful win over the West Coast Eagles, with Justine Mules starring.

The Adelaide Crows continued its undefeated start to the AFLW season with a powerful win over the West Coast Eagles, with Justine Mules starring.

The Crows flexed their muscles to show their AFLW dominance, as they easily accounted for the West Coast Eagles, and continued their undefeated start to the season with a 42-9 win.

It was a tight start, as Erin Phillips got the Crows on the board early with her first goal for 2021. Her strong marking ability was on show with a couple of big contested marks, and she was a pillar for the Crows in attack.

The Eagles were not going down without a fight, as Aimee Schmidt scored a goal of her own, and the teams fought an arm wrestle of a first quarter, with the Crows leading by a solitary point at quarter time.

Coming out after the break, Adelaide started fast, and from there it was all one-way traffic.

Ash Woodland continued her strong form in the forward line, taking her season total to ten goals, in what was a lesser return after back to back four-goal performances to start the season.

Justine Mules also chipped in, adding two goals of her own. Mules spoke toEdge of the Crowdafter the game about continuing that strong form as a forward line group.

"We were a little bit slow to get going, but at halftime we really switched on and played some decent football and were able to get the win," Mules said.

"Over the preseason we've been able to really knuckle down and really identify what we need to work on, and how we're going to gel well as a team, and that's slowly being able to produce some good footy, and some really good leading patterns."

On a personal note for Mules, she was happy to have hit the scoreboard for the first time this season and double her career tally.

"Absolutely. I've played more than my fair share of footy, and to be able to be a part of the forward line and be able to get a couple of goals was always exciting.

"I feel very privileged and honoured to kick a few goals for the Crows. I'm absolutely stoked to be a part of the forward line."

Ebony Marinoff led the way for the Crows with 23 disposals and six tackles, as she and Eloise Jones (20 touches, four tackles and a goal) had the Crows' engine room operating at full speed.

"Being able to get the midfielders really. hitting us up nice and high and nice and low, and being able to take some really clean marks when we can," Mules explained.

"Our midfielders are just sensational."

PIES COME OUT UNSCATHED AND UNDEFEATED IN PHYSICAL CONTEST AGAINST CATS

CROWS CONTINUE ‘EXCITING’ START TO THE SEASON WITH WIN OVER KANGAROOS

The Eagles continued to fight hard, as Dana Hooker, Mikayla Bowen and Aisling McCarthy each had 18 disposals. Despite their best efforts, play continued to break down at the high half-forward line, as the Crows midfield pressured the ball carriers and pushed back in team defence.

The Eagles were able to run and play the ball wide, and try and test the Crows, who are used to a more narrow ground at Norwood Oval.

"My first reaction when I did my first walk around was to think 'Oh wow, this is quite long from when you're standing in the middle. It is a beautiful ground, and a great stadium to be able to play here.

"We did get some good advice, as forwards we can push up through the guts, knowing that they are going to use that wide entry to go into their forward line.

"We had the courage, especially forward of the midfield, just to really cluster through the guts [of the ground], and that was one way we were really able to impact their offensive tactics.

"That was a really good discovery from our coaches, and giving us that courage to really be as defensive, and be quick to transition [forward] when we can."

The bright spots for the Eagles were Evangeline Gooch and Sophie McDonald.

Both young players seemed to relish the physicality that the Crows threw at them, and McDonald looked particularly calm on the last line of defence, preventing at least two certain goals.

The Eagles were under-resourced, missing captain Emma Swanson, and Dana Hooker among a host of players to limp off during the game. Hooker returned, but it was not enough to stifle the Crows.

The Crows had their own injury concerns, as Anne Hatchard suffered a flare-up of plantar fasciitis and missed the final term. Her absence set the stage for debutant Allie Ballard to take a central role in the second half.

Ballard obliged, as she showed off her skills with ten touches, two tackles and a tight shot on goal that was pushed just wide. Ballard, along with Teah Charlton show that the future is bright for the Crows too, who have now won all three matches this season, two by more than five goals.

The Crows are slated to play Melbourne next week in a heavyweight clash, while the Eagles will be hoping to get their first win of the season against the similarly winless St Kilda.