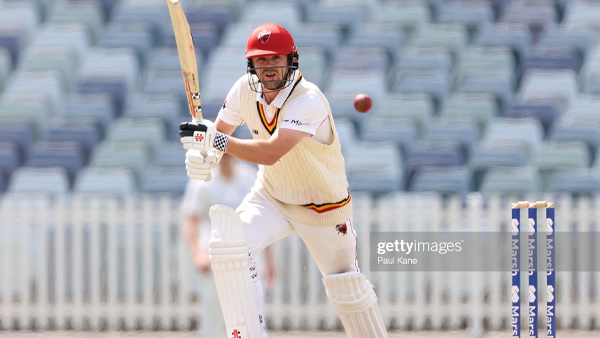 Cricket Australia has recognised the efforts of four cricketers in its announcing of the men's and women's Domestic Player of the Year, and Young Cricketer of the Year awards.

Cricket Australia has recognised the efforts of four cricketers in its announcing of the men's and women's Domestic Player of the Year, and Young Cricketer of the Year awards.

Cricket Australia has announced its recipients of the men's and women's Domestic Player of the Year, and Young Cricketer of the Year.

After a strong 2021/22 season across many formats of the game in both men's and women's competition, four players have been rewarded for their successive seasons within the voting period and awarded the respective honours.

For the domestic awards, it is peer-voted with votes collected by all the players, and for the Young Cricketer of the Year awards, players must be 24 years old or younger to the commencement of the award period and have not won it previously.

As well, prior to the award period for the Young Cricketer of the Year, male players must have played 10 or fewer first-class matches, and 25 or fewer combined List A and BBL matches, whereas for the females, the criteria is 25 matches or less.

South Australian all-rounder Travis Head has had a dominant domestic season with the Redbacks in both Sheffield Shield and Marsh Cup competitions, as well as for the Adelaide Strikers in the Big Bash League when he wasn't away on national duties across the Ashes series against England.

In the 2021/22 Sheffield Shield season, Head has played five matches and through eight innings with the bat, has scored 394 runs at an average of 49.25 and strike rate of 71.63. This includes two centuries and a half-century, including a knock of 163 against Western Australia in his first innings of the season.

With the ball, Head's off-spin resulted in five wickets at an average of 45.80 and an economy rate of 3.36 as his best bowling figures saw him claim 2/22 against Tasmania in November.

In the Marsh Cup, Head sits second for most runs scored with 306 for an average of 76.50 and strike rate of 153.76. He hit a career-high 230 runs against Queensland, a knock that saw him with the second-highest individual score in a domestic One-Dayer - behind D'Arcy Short's 257 in 2018 - and become just the second batter to hit two double-centuries in Australian domestic One-Dayers - the other being Ben Dunk.

Throughout BBL|11, returned from national duties to help lead his side through the finals series, however, couldn't get going with the bat, scoring 11 runs from three innings, and finishing with bowling figures of 0/14 from two overs, in two games.

“I am honoured to receive this award and thank Cricket Australia and SACA for the opportunity to play cricket at the highest levels. Things like this are not possible without the hard work of teammates and coaches and I am extremely grateful to everyone who has helped me both on and off the field," Head said.

“I’d also like to thank the ACA for their help during the year, and for this award voted for by my peers. Domestic cricket in Australia is in a very strong position, something shown by our recent performances on the world stage. I love representing South Australia and hope to do so for many more years to come."

Victorian Elyse Villani has capped off her 2021/22 season with earning the Domestic Player of the Year, following a strong show of form in the Women's National Cricket League (WNCL) for eventual runners-up, Victoria.

Villani topped the runs tally for the competition with 611 in nine innings, averaging 87.28 at a strike rate of 84.62. Her season included three centuries - with her highest score of 135* against the NSW Breakers - and a further two half-centuries.

In WBBL|07, Villani finished third among the leading run-scorers with 439 runs at an average of 43.90 and a strike rate of 122.28. In 12 matches, she made one century - a 100* coming in the Melbourne Stars' final match of the season -, along with three half-centuries.

“I feel privileged to be awarded the Female Domestic Player of the Year, to know that it is a peer-voted award makes it really special and something I hold close," Villani said.

“Thank you to the girls I’ve played with and against in the past year, the competitions we play in getting better each year and it’s amazing to see the development of women’s cricket, thank you for your efforts over the past season, particularly in trying circumstances.

“I am fortunate to play the sport I love for a living and am grateful to play alongside amazing teammates for incredible organisations, I feel lucky and humbled."

Playing for Premier Cricket club Parramatta predominantly, the 23-year-old was presented with the opportunity to play in Tasmania, New South Welshman Tim Ward entered his second season at a first-class level, performing in the Sheffield Shield.

The opening batter made his mark on the domestic circuit, finishing the Sheffield Shield competition as its leading run-scorer, hitting 467 runs at an average of 51.88 and a strike rate of 41.99. This is complemented by his maiden match in early 2021 where he scored 39 runs as he showcased his capabilities.

In five matches and nine innings, he made his maiden first-class century against Queensland, in just his second Sheffield Shield outing, scoring 144 runs. Across the remainder of the season, Ward also scored three half-centuries.

“Eighteen months ago, if you told me I’d win this award, I wouldn’t have believed you. It’s been quite surprising how fast I think I’ve grown as a cricketer since coming down to Tasmania and I’m honoured to receive the award," Ward said.

“It means so much to win this award but when it’s voted by the players it’s extra special. Eighteen months ago, most of them wouldn’t have known who I was. So for them to vote for me, it means a lot.”

South Australian Darcie Brown shot onto the domestic cricketing scene within the last year, and while she hasn't suited up for the Scorpions in the WNCL this season due to national team commitments against India - where she made her T20 and ODI debuts -, and now England - making her Test debut -, she did have a stellar WBBL|07 campaign to be named in the Team of the Tournament.

Playing for the Adelaide Strikers, the 18-year-old ended the season in third place for most wickets taken, the fast bowler claiming 19 wickets at an average of 16.00, with an economy rate of 5.96. In 14 matches, her best bowling figures resulted in collecting 3/19 against the Hobart Hurricanes, and she took a wicket in the WBBL|07 Final, which the Strikers lost to the Perth Scorchers by 12 runs.

"I'm really honoured to have won the Betty Wilson award. It is such a special award, especially being voted by my peers," Brown said.

"I’ve loved the opportunities I’ve had to play for Australia and wouldn’t have been able to do so without support from my family and friends, and my teammates and coaches who have been able to push me to improve and help me enjoy my cricket.”