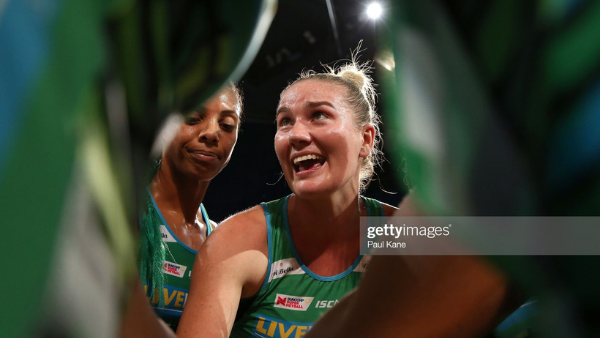 Speaking to the media during the week Bruce said that she feels honoured to join the two West Coast Fever legends on 100 games.

"Cbass [Bassett] and I have a really great bond that came from the same association and spent a lot of our younger years playing. I pretty much followed Bass’s pathway into fever so really special that I got to join her and the same with Shae.

"Shae bled green when she was here and loved playing for the club. So yeah, really, really special that I get to join them in hitting  100 games.

"It means the absolute world to me, I've always wanted to be a one-club player and to hit 100 caps with Fever, it's so special."

Bruce has a green heart and the chance to reach the 100 game milestone with a club she is passionate about is a pinch yourself moment for her.

“I think that when I was younger I was quite a shy kid and probably didn't think that I had the capacity to play at this level, let alone hit 100 games.

“So yeah, it does blow my mind that I am here. I've had lots of highs and lots of lows along the journey but had a really good support network and people pushing me along and allowing me to grow into the person that I am today.

“Just super grateful that I get to reach this milestone and get to do it with a club that feels like absolute family.”

Although quite not getting the ultimate glory, being able to play in a Grand Final in Perth was one of the many career highlights for the Fever Captain.

“I think the 2018 Grand final here in Perth was a huge one. Walking out into the arena and just literally seeing all green. The city turned green for us, which was pretty special.

“My debut in 2013 was the first time that I stepped out on the court in the fever dress. I think there have been some of my absolute highs.

“I just love this club and I love our fans and what we get to provide week in week out when we step into the arena so I think every time I step out on the court, it's a highlight for me.”

While she’s still got plenty ahead of her in her Super Netball Career, she wants to leave a legacy that will leave the Fever in a better place than when she arrived all those years ago.

“I think my legacy I just want to make sure that I leave the bib and the club in a better position than when I came into the role.

“I am really passionate about making sure that Rudi [Ellis], Sunday [Aryang], Ruth [Aryang] and our young training partners that are coming through can learn as much of me as I did from the players that came before me.

“If I can leave the club in a better position then I'm pretty stoked with that.”

A huge driving factor for the Fever captain this season is to bring home the silverware to Western Australia.

“I just think that obviously, this club deserves success for our 25th year but I also think that the WA community, the netball community deserve some success too. They've been on this journey with us for such a long time and within the highs and lows of us too.

“To get a premiership and bring success back here, especially in potentially our 25th year would be absolutely fantastic.”

The West Coast Fever will take on the Collingwood Magpies today at John Cain Arena with the first centre pass kicking off at 2 pm AEST.