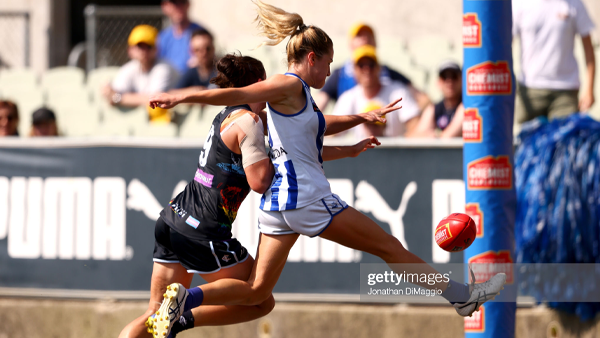 Consistent goal-bound Kangaroos no match for Blues at Ikon Park

A consistent four-quarter effort from North Melbourne ensured a five-goal victory against a Carlton side who couldn't keep up in the second half.

Consistent goal-bound Kangaroos no match for Blues at Ikon Park

A consistent four-quarter effort from North Melbourne ensured a five-goal victory against a Carlton side who couldn't keep up in the second half.

Consistent across all four quarters, the North Melbourne Kangaroos proved to be too good against a Carlton Blues lineup, prevailing by 30 points in their Round 4 AFLW clash.

Coming off a four-day break followinga Round 3 loss to Brisbane, Carlton wasn't able to respond as well as it would've liked, with the power of North Melbourne no match in the 7.9 (51) to 3.3 (21) result.

From the outset, it was clear that both teams were looking to apply pressure and move the game on at all moments as it took four minutes for the first stoppage to result in a halt of play.

Carlton, when in possession, looked to slow the game down a touch, but could rarely get out of its defensive half, such was the North Melbourne forward pressure, and intercept marks, especially overhead.

The lack of connection from halfback to the middle from the Blues was a result of more players coming into the backline to help restrict their opponents, and any run they went on, were immediately caught.

Daisy Bateman kicked the first goal of the afternoon, winning a free kick for front on contact against Natalie Plane as the two were backtracking towards the goal line. In the end, Bateman kicked truly from the goalsquare to put the Kangaroos on the board.

After a few inside 50s and a couple of subsequent shots at goal - all resulting in behinds -, Carlton finally found a major when Brooke Walker took advantage after Courtney Jones was held without possession of the ball at half forward. Walker ran into the 50, got to 45m out, and bounced the ball towards goal for the Blues to take a slight lead into the first break.

Carlton's use of the ball and pace through the centre was finally able to shine at the beginning of the second quarter, able to cut through North Melbourne's defence. This style of play helped set up a Darcy Vescio goal when Georgia Gee found some run and kicked to a one-on-one with Vescio winning the battle and snapping across their body for the goal - their first for 2022, which showed in their emotion.

The pressure was always there from both sides, even when North Melbourne tried to slow the pace down, moving forward when needed, looking to move through stop-start kicks. This method worked well for the team who found Tahlia Randall kick a goal to even the scores at 14-all.

The Kangaroos weren't done for the quarter yet either, as, with her first touch of the game, Daria Bannister kicked a goal to put her side in front once again, running around on a slight angle from the boundary line and seeing the ball sail through for six points.

The Blues, despite only being down by eight points at halftime, showed perseverance coming out of the main break, utilising the one-on-one contests to their advantage when possible, and having space to consider their options moving forward.

However, that style of play didn't eventuate in any scores for the Blues. Instead, the Kangaroos resilience in their forward half and constant entries deep saw chances happen but to no real advantage until Bannister scored her second goal of the day from a slight angle.

The fourth quarter began with a Kaitlyn Ashmore goal within the first five minutes which probably put the game beyond doubt, the North Melbourne lead having grown to 22 points.

A miskick across goal that missed the target and went out of bounds on the full from Breann Moody after a strong intercept mark deep inside defensive 50 went punished by Alice O'Loughlin. The fifth-gamer found her first goal in the AFLW with a well-bent outside-of-the-boot kick as the lead ballooned.

O'Loughlin kicked her second goal of the afternoon shortly after, beating her opponent in a one-on-one race towards goal to get a boot on the bouncing Sherrin after Carlton lost a moment down the other end.

Georgia Gee made sure it wasn't to be a scoreless second half for the Blues when she kicked a goal with less than 30 seconds remaining in the match.

The top-three disposal-getters were all Kangaroos players, with Ashleigh Riddell adding to her 35-touch game last week against the Cats with another 30-touch game this week. Jenna Bruton improved her season-best tally with 28 possessions at Ikon Park while Madison Prespakis was the Blues' best performer with 21 disposals.

It was all North Melbourne on the defensive front too, with Kimberley Rennie, Tahlia Randall, Mia King and Alice O'Loughlin all recording five tackles as the visitors won that stat by 12 overall against Carlton - with 18 of its 45 tackles in the game in North Melbourne's forward 50.

Looking ahead to Round 5, North Melbourne is set to travel to North Hobart Oval to host Fremantle, while Carlton welcomes Adelaide to Ikon Park, both matches being scheduled for Sunday February 6.