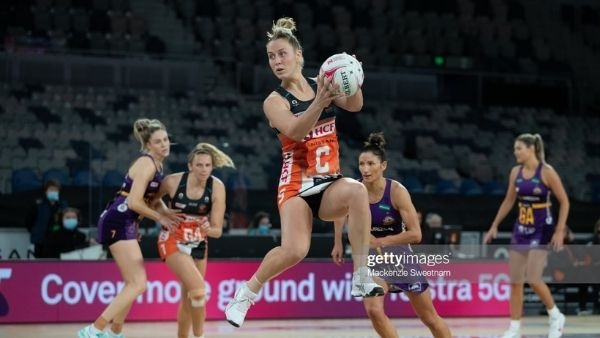 Consistency is the key for the Giants

Consistency will be the key for the Giants during this team girls campaign as they will be looking to build off the sides series of pre-season games.

Consistency is the key for the Giants

Consistency will be the key for the Giants during this team girls campaign as they will be looking to build off the sides series of pre-season games.

The Giants will be looking to go one better in 2022 after just falling short at the final hurdle last season. With consistency the key for the Giants and being able to produce great netball across all four quarters

Giants Superstar Jamie-Lee Price said this pre-season the focus was to improve the side's consistency and turn those brilliant patches of play into a strong performance across the match.

"I think for us it’s just literally concentration," Price told Edge of the Crowd.

"I see so many good patches in the game but it’s being able to put those good patches and create them into a sixty-minute performance.

"We’ve got lots to work on in terms of our defence and our attack but I think once we get all those little things right, we’ll be a great team."

There have been a few new additions to the Giants over the off-season with Lauren Moore coming from the Swifts and Amy Sligar being elevated from a training partner. Although Price said there is one returning Giant that has stood out across this pre-season.

"So we’ve got Loz Moore [Lauren Moore], we’ve got Amy Sligs [Amy Sligar] who was a training partner last year." and obviously Matilda McDonell who was in our 10 last year is getting plenty of court time and I think it’s great to see the energy they bring to the team.

"You’ll notice Tilly’s expressions and facials but I’m so excited for them and I think they’ve been great so far and I can’t wait to get out there this weekend and see what we can bring out."

The Giants are going into team girls with plenty of match fitness under their belts after playing a series of pre-season matches which Price said the side took a lot of learnings from.

"It’s been really good, we’ve played Lightning, Swifts and had two games last weekend against the Thunderbirds in Orange and I think we’re getting a lot out of the games.

We’re getting our young players that haven’t had much experience in Suncorp Super Netball and they're getting out on the court and having plenty of court time.

The plan for the Giants this weekend is to just get better in every match they play this weekend but will be without midcourter Maddie Hay due to covid protocols.

"I think it’s just improving every game and getting better, we’re missing Maddie Hay from covid so she’s a big loss to our team.

"So it’s all about getting the young ones out there that we wouldn’t necessarily put out there during the season but giving them all experience.

"Just going out there and having a crack and enjoying ourselves is the key."

The Giants will kick off its Team Girls campaignas they face the West Coast Fever tonight at 5 pm.