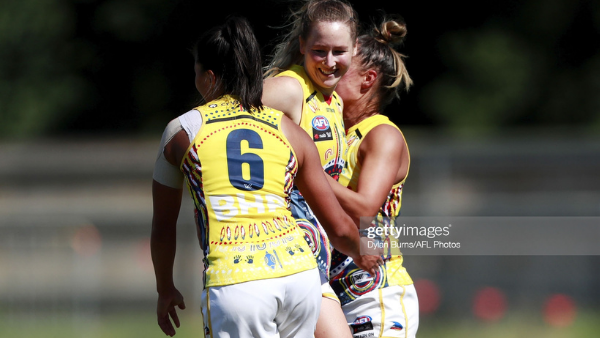 Considine flourishing in new role as Crows continue to soar

The Adelaide Crows' Ailish Considine is flourishing in her new attacking role which saw her kick two goals in last weekend's win against the Carlton Blues.

Considine flourishing in new role as Crows continue to soar

The Adelaide Crows' Ailish Considine is flourishing in her new attacking role which saw her kick two goals in last weekend's win against the Carlton Blues.

There is no doubt that the Adelaide Crows' AFLW side is flying at the moment but so is Irish recruit Ailish Considine after a two-goal performanceagainst the Carlton Blues on Sunday afternoon.

Having featured in defence for most of her career, Considine has started to play more of an attacking role, having featured on the wing and this week was able go up forward.

Speaking to media, the Adelaide utility declared that she had no issue with trialling different positions, as long as she felt comfortable, and was able to do what was required of her by her coaches.

"I've been kind of all around the place in terms of trying to figure out [the] best position for me and I think predominately [being] on the wing for this season and parts of last season as well and I think I'm starting to get a little bit more comfortable in that," Considine said.

"I had a few rotations into the forward line this weekend which was you know, nice because I haven't really had much of that since my first season.

"I love playing no matter where it is, if it's on the wing, half forward or half back and I think I just take the opportunity as best I can whenever that comes about and and try to play my role as best I can."

While Considine was able to get two goals to her name on the weekend, she says it's a true testament to the work rate of the the team.

"I think it's really a credit to the to the rest of the girls and the work that went throughout like Lisa [Whitley] kicked me that great ball across for the mark and set shot and the body work from Caitlin Gould and tap down from Hannah Munyard, it's always a collective effort," she commented.

"I think it's just a collective work rate from the entire squad and I've just I've just been the lucky one this weekend."

Considine missed the first couple of games this season but has featured in the last three, hoping to begin to cement her spot in the Crows line up, addressing if there had been anything she's changed in her approach in order to find more game time.

"Nothing specific really, it's just been a constant work hard at training and try to be as consistent as possible," she mentioned.

"The feedback from most of the coaches and stuff is just keep doing what you're doing and keep working hard and you know, the opportunity will come and and I guess I've just been fortunate enough to get that opportunity the past couple of games.

"Hopefully I'm showing enough to keep playing my role for the team and hopefully keep getting a spot on the team week in, week out."

The performance against the Blues was arguably the best performance from the Crows this year, and one that Considine says confirms that the side is ready to go to another level in 2022 after the heartbreak of last year's Grand Final loss.

"You know when you play different teams, it's different styles of play that you end up playing and I think Carlton are very strong in the contest and they're very quick to move the ball out with hands," she said.

"I think collectively we had really good patches in the game and had really strong performances from from a lot of the girls.

"So I'm not sure if it's been our best performance so far but hopefully we'll keep improving then we'll set the bar even higher again the next time we go out and play."

The Adelaide Crows will face the Western Bulldogs in Round 6 at Norwood Oval on Sunday at 4:40pm local time.