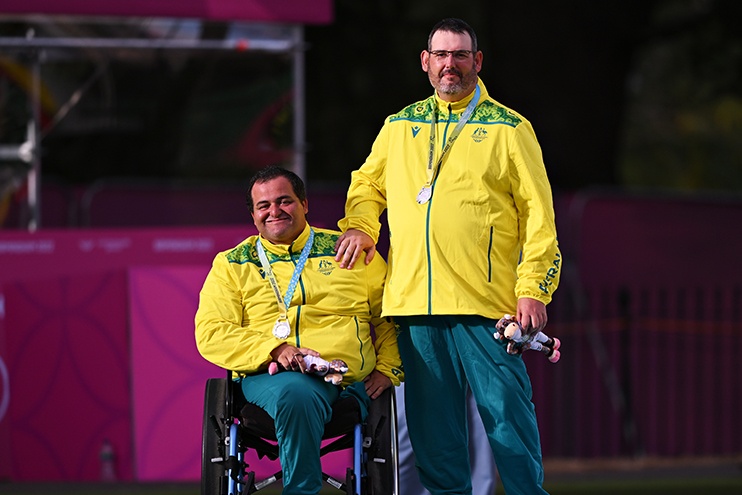 On the day that took Australia's tally to 100 medals, there were plenty of highlights. From the usual medal haunts of the pool to the less familiar surroundings of the judo hall, the slew of medals in Birmingham continued for Team Australia.

AOIFE COUGHLAN LEADS THE WAY IN THE JUDO HALL

Our first port of call has to be the Judokas. The Aussie Judo CWG team is now in the record books as our most successful judo team to ever appear at a Commonwealth Games.

After three medals on day four, the Judokas went one better with four medals on Day 5. Aoife Coughlan led the way with a gold medal in the 70kg women's class. Katharina Haecker managed a silver in the women's 63kg class, whilst Jake Bensted and Uros Nikolic claimed bronze in the men's 73kg and 81kg classes, respectively.

Australia has taken out the men's 3x3 wheelchair basketball defeating Canada 11-9 in the gold medal match. Luke Poole continued his stellar games campaign with a dominant display, scoring six points as the Aussies romped to the gold.

The Aussies defeated Canada in their opening pool match before being defeated by Northern Ireland. Despite that defeat, they qualified for the semi-final and defeated host nation England in an absolute thriller, winning 12-11 in overtime.

3x3 Wheelchair Basketball made its debut at this year's games and has proved to be a massive hit with local crowds in Birmingham.

Eileen Cikamatana not only won a gold medal in the Women's but blew away the competition with an incredible display in the 87kg Women's weightlifting.

Cikamatana set the Games record in the category with her snatch lift of 110kg. She then took the overall lead with her first clean and jerk attempt of 129kg. Her second lift of 137kg won the gold medal, setting the clean and jerk and overall Games records. She completed the domination of her class with the third lift of 145kg, giving the Australian a total of 255kg.

To make her feat all the more impressive, Eileen recovered from a 26cm tear in her thigh that she sustained last year. The injury was so severe that she could not squat.

During the medal ceremony, Cikamatana was overcome with emotion, breaking down in tears as she paid tribute to coach Paul Coffa.

Pole vaulting sensation Nina Kennedy has won Australia's first CWG gold since Glasgow 2014. After a nightmare of a meet at the Tokyo Olympics that saw her place a disappointing 22nd, it was a timely return to form for the highly rated Aussie.

Kennedy shocked viewers as she prepared to jump for the gold, jumping higher than was required to take her spot at the top of the dais.

Although a jump at 4.50m would have secured the gold, Kennedy jumped 4.60m to win the competition. The same height that won her bronze four years ago.

"I'm feeling relieved, I really wanted that gold," Kennedy said after her vast gamble paid off.

Tyson Bull was not even supposed to compete in the horizontal bar final. But when Jesse Moore withdrew from the event with a shoulder injury, the stage was set for him to secure a medal in front of the Duke and Duchess of Cambridge.

Bull's performance was made even more unreal when you factor in the fact that he seriously injured his ankle just a few weeks ago after a bad fall. He couldn't even stick the landing in qualifying. Tyson Bull performed so well that he was in the gold medal slot right up until the final competitor, Cyprus' Ilias Georgiou, stitched up the gold.

Damien Delgado and Chris Flavell have fallen agonisingly short of yet more gold after being pipped at the post by Scotland. The duo were in control early, but some superb bowling by the Scots saw them take the lead and not look back. The match ended with a score of 16-7.

Despite the disappointment of missing out on gold, it is yet another medal to add to Australia's growing tally on the greens.

Australia unsurprisingly took home the gold in the inaugural mixed medley relay at the CWG. The team chosen for the final consisted of Mathew Temple, Zac Stubblety-Cook, Kaylee McKeown and Emma McKeon. Kyle Chalmers and Cody Simpson were omitted.

The gold medal saw Emma McKeon take her CWG gold medal haul to a record-breaking 13 and a mind-blowing 19 overall. McKeon was picked ahead of Chalmers for the final despite Chalmers dominating in the pool in Birmingham with three gold medals.

Ultimately the selectors wanted to go with the same team that won bronze at the Olympics in Tokyo last year.

The Dolphins have been out of control at this year's Commonwealth Games. To say they have been dominant would be an understatement. So it is no surprise that yet another podium sweep makes the Edge of the Crowd's top nine.

This time it was in the Women's 800m Freestyle final. Led by The Terminator, Arianne Titmus was pushed all the way by compatriots Kiah Melverton and Lani Pallister.

As if you needed any proof of the Aussie girl's dominance in the pool, this made it 12 from 12 in the freestyle events in Birmingham.

Arianne Titmus wasn't the only Aussie to lead a podium sweep on Day five. 18-year-old Mollie O'Callaghan added the CWG 100m freestyle gold to the World Championships gold she won just a month ago.

The 18-year-old came off the wall flying to mow down Shayna Jack and Olympic gold medallist (and most decorated athlete in CWG history) Emma McKeon to take home the gold in 52.63s.