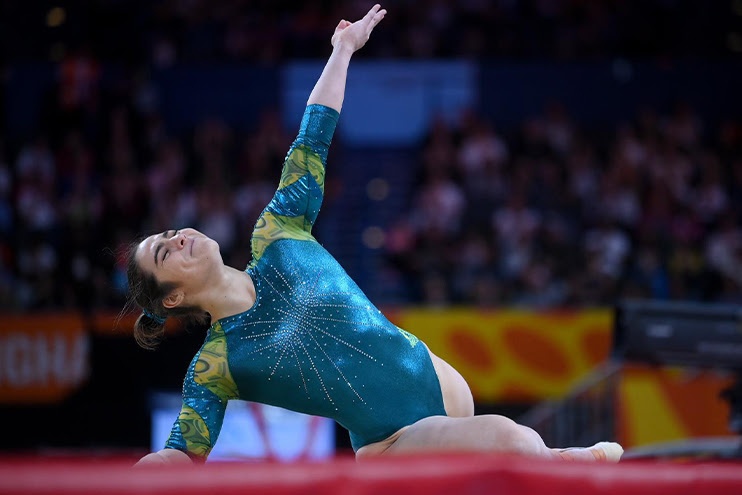 Commonwealth Games debutants Ellen Ryan and Tinka Easton made history in their respective sports, while it was a clutch finish in the men's 3x3 wheelchair basketball semi-final.

Commonwealth Games debutants Ellen Ryan and Tinka Easton made history in their respective sports, while it was a clutch finish in the men's 3x3 wheelchair basketball semi-final.

Australia's medal tally increased by 19 on Day Four of the 2022 Commonwealth Games in Birmingham, with the addition of nine gold, seven silver, and three bronze, highlighted by more success in the pool, and a couple of debutants winning their respective events.

Gymnast Georgia Godwin has continued her success at the Commonwealth Games, backing up her gold medal in the Women's All-Round final, winning her second gold medal of this year's Games in the Vault.

Godwin landed a 13.700 in her first vault, and 12.766 in her second attempt, drawing her level with eventual silver medallist, Canada's Laurie Denommee on 13.233, with Godwin pulling ahead due to first score being the highest individual total.

Godwin was pipped slightly by reigning Commonwealth Games gold medallist, England's Georgia-May Fenton in the Uneven Bars final, recording a score of 13.500, .400 behind Fenton, to claim a silver medal in the event. Godwin received a 5.600 for difficulty, and 7.900 for execution.

Godwin has the chance to win gold again in the Balance Beam event later in the week.

After overcoming a crash at the London Olympic velodrome 48 hours earlier which saw him needing splinters removed from his elbow, and having to ride a bike with different handlebars due to safety reasons, cyclist Matthew Glaetzer has defended his 2018 Commonwealth Games gold medal in the 1km Time Trial - equaling Anna Meares with a record fifth title at a Commonwealth Games.

Glaetzer was the last rider to go around the track in the 20-person field, with fellow Australian Thomas Cornish holding onto first place at that point with a time of 1.00.036. Glaetzer ensured it was a top two finish for Australia, clocking a time of less than a minute, crossing the line in 59.505 seconds, with an average speed of 60.499.

Fellow Australian cyclist Matthew Richardson was pipped by Trinidad and Tobago's Nicholas Paul for bronze, with Richardson finishing fourth with a time of 1.00.152.

Another medal haul in the pool for the Dolphins

The Australian swim team had another successful night in the pool, winning five more gold medals.

It included Emma McKeon winning her fifth Birmingham gold medal in the 50m Butterfly with a time of 25.90 seconds, taking her total Commonwealth Games gold medal tally to 12. McKeon shared the podium with Holly Barrett who tied with South Africa's Erin Gallagher, finishing with a time of 26.05 seconds. Alex Perkins finished fifth.

Kyle Chalmers won gold in the 100m Freestyle, finishing with a time of 47.51. Fellow Australians William Xu Yang and Zac Incerti finished fifth and eighth, respectively. Minna Atherton came fourth in the 200m Backstroke, but it was Kaylee McKeown who won gold, finishing with a time of 2:05.60 - a Commonwealth Games record, before backing her form up with a silver in the 200m Individual Medley.

Australia set another Commonwealth Games record in the 4 x 200m Freestyle Relay, with Elijah Winnington, Flynn Southam, Incerti, and Mack Horton combining to take out the event and win gold.

Elsewhere, Matthew Levy finished his decorated career in the pool, defending his 2018 gold medal with the same result in the 50m Freestyle S7 in Birmingham. Levy finished with a time of 28.95 seconds, while fellow Australian Joel Mundie finished sixth.

After falling in a semi-final against Singapore, Australia's women's table tennis team was resigned to the bronze medal playoff against Wales, with the combination of Jian Fang Lay, Minhyung Jee, and Yangzi Liu overcoming their opponents to place on the podium.

Lay, Jee, and Liu will hope to add to their own, and Australia's medal tally when the table tennis singles competition gets underway later in the week.

Australia, despite giving up its first goals of the Birmingham Commonwealth Games, has won 7-2 against New Zealand on the second day of the Men's Hockey group stage to remain undefeated. The Kookaburras took a one-goal lead eight minutes into the first quarter through Jacob Anderson, though the Black Sticks equalised within the first two minutes of the second quarter with Hugo Inglis finding the net.

Australia scored the next four goals to go up 5-1 before New Zealand scored again in the third quarter. The Kookaburras added one more goal to their total in the fourth quarter as the match came to an end.

The Aussie Diamonds have gone three from three in Birmingham with a 74-49 victory over South Africa. It was the lowest score Australia had recorded, and also the highest score the team has conceded so far at this year's Games.

Australia won every quarter on the way to victory with goal shooter Gretel Bueta scoring 34 goals from 34 attempts, while goal shooter Cara Koenen - who came on for the fourth quarter - and goal attack Steph Wood contributed 14 goals, with goal attack Kiera Austin finishing with 12 goals to her name.

Australia is through to the gold medal match in the 3x3 Wheelchair Basketball, with Lachlin Dalton hitting the game-winning two-point shot in overtime to complete a 12-11 semi-final victory against England. It was the only two-point shot to be made throughout the entire game.

It took over a minute for the first point to be scored, through England's Lee Manning, with Australia getting on the board 20 seconds later via a Kurt Thomson basket. By the halfway mark, England was up 5-1, but, back-to-back shots by Jake Kavanagh brought Australia back into the contest.

England's Charlie McIntyre took the margin back out to four points, before Australia's Luke Pope scored the next two points, and Dalton brought the team within one goal. Manning and McIntyre continued to put up shots for the home team, leading 9-6, before the Australians drew even - and had the lead with 51 seconds on the clock before England levelled with 11 seconds to go, to send the game to overtime.

Manning scored first in overtime, before Dalton made the buzzerbeater two-point shot that was required for victory. Australia take on Canada in the gold medal game.

Australia's women's 3x3 Wheelchair Basketball team is also through to the gold medal game, having beaten England in the semi-final, 8-6. Amber Merritt got the scoring underway within eight seconds, with Merritt scoring the next three points for Australia as the team had a 4-1 lead with six minutes remaining.

England came within two points with three minutes to go, although Ella Sabljak banked the next two points as the next three points scored were a back-and-forth affair, with England's Amy Conroy trying for game-tying two-pointer with 17 seconds on the clock, but missing as Australia held on for victory. Australia will face Canada in the gold medal game.

Commonwealth Games debutant Tinka Easton has won the gold medal in Birmingham in the 52kg Judo final, breaking a 20-year drought for Australia in the sport. After prevailing over Cyprus' Sofia Asvesta in the quarter-final, and Northern Island's Yasmin Javadian in the semi-final, Easton met Canada's Kelly Deguchi in the final.

Each judoka was penalised with Deguchi picking up one shido, to Easton's two as the match headed into golden score. Easton managed to pull off a fine throw to seal a match-winning waza-ari.

Commonwealth Games debutant Ellen Ryan stormed home on the green to take the gold medal in the women's singles on Rink 1 at Victoria Park, becoming the first Australian woman to win lawn bowls gold in the category at a Commonwealth Games. Previously, Karen Murphy won silver in 2002, and Kelsey Cottrell won bronze in 2010.

Ryan's opponent, Lucy Beere of Great Britain, was leading 6-0 at the completion of the third end, before Ryan added her first points with a one-point fourth end. The ninth end provided a spark for Ryan, trailing 10-2, but claiming three points as she drew even at 11-all by the end of the 13th end, and gained a lead for the first time in the match-up shortly after.

A three-point 19th end saw the scoreline become 16-17 in Ryan's favor, and not even a game-tying 20th end from Beere could deter the Australian, claiming for points across the next three ends on the way to celebrating a gold medal achievement.