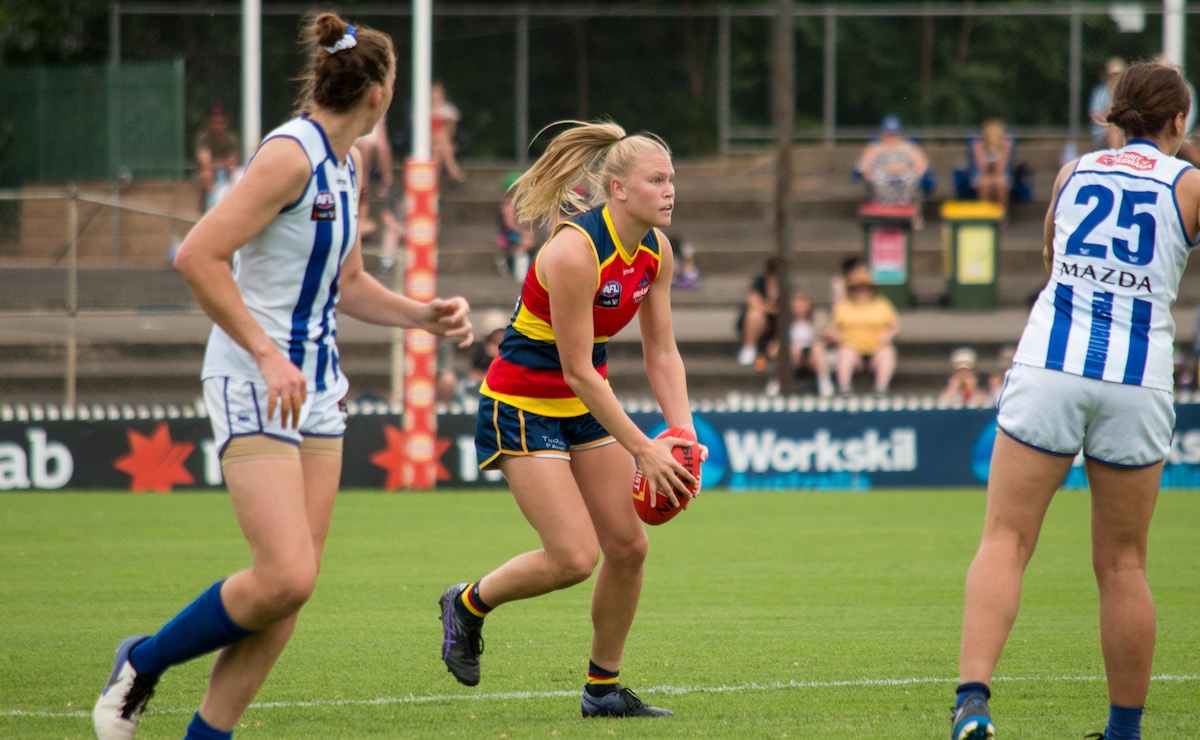 Montana McKinnon has been lighting up the footy field this AFLW season, impressing her coach and earning the young Adelaide Crows ruck a Rising Star nomination.

Montana McKinnon has been lighting up the footy field this AFLW season, impressing her coach and earning the young Adelaide Crows ruck a Rising Star nomination.

Montana McKinnon has been lighting up the footy field this AFLW season, and her best game of the year - 12 disposals, 12 hit-outs and seven marks against the Carlton Blues - earned the young Adelaide Crows ruck a Rising Star nomination.

However in 2021, the Crows were flying and McKinnon couldn't find her way into the side. A two-time premiership playing for South Adelaide, she battled away in the SANFLW waiting in the wings should a spot open.

It didn't come, but McKinnon didn't lose sight of the bigger goal because her time would come, promised her coach Matthew Clarke.

While watching on from the sidelines tested McKinnon's patience, it also encouraged her to work harder, and now she is reaping the rewards, holding her position in the Crows' side through the first five rounds of the 2022 AFLW season.

Speaking to media on Friday, Crows' head coach Clarke was excited for McKinnon to be rewarded with the Rising Star nomination, a testament to her hard work over several seasons.

"Montana's story is that she didn't get a game at all last year, she played SANFL for the whole season and played really, really well, but the opportunity just didn't present.

"So she's getting some reward for not only her recent effort, but for effort over an extended period. So really pleased for her."

This season it's been McKinnon and Caitlin Gould shouldering much of the ruck duties, in the absence of Rhiannon Metcalfe.

While young and relatively inexperienced, the pair have been brilliant in combination and sharing the workload of the role around the grounds.

It'll be tested this week though, with McKinnon and Gould set to come up against Celine Moody and Alice Edmonds, though they'll no doubt attack it as they have every other so far this season.

"In terms of the combination, I think we've got a really good challenge this week, two really strong rucks that they'll come up against," Clarke said.

"But their ability to share that workload and also just to spend a little bit of time forward and try to provide us with some aerial presence down there, has been really important for us.

"So all things being equal, that's the way we'll continue.

"It may not [always] be the case, sometimes there's other scenarios where we perhaps don't play two rucks, two genuine rucks, but at this stage, we'll probably continue with that - certainly for this week, given our opponents."

With two genuine rucks in a side, selecting who starts in the middle and who comes off the interchange can be a strategic, well-thought out plan, combining "a little bit of everything: a little bit of judgment, a little bit of opponent" or the coaches "just toss a coin".

Last Wednesday, McKinnon told media just how hard she'd worked in the offseason to be pushing for a spot in the best 21 this year.

"I obviously didn't play last year, which was pretty tough, so I knew in the offseason that I needed to improve fitness, strength, I was in the gym running a fair bit.

"So both in the offseason and into the preseason, I worked pretty hard. And then obviously [it was] exciting getting a game this year."

While working hard was a big part of getting a game in 2022, being patient was equally as important.

It's rare that a ruck will be drafted and immediately play the role for a club for an entire season. Coming up against stronger bodies strains a teenager, and without the conditioning that comes from playing in a high-performance environment for years, it's tough.

Clarke knew it, and deep down McKinnon knew it too as she worked her way through her second season in the system without playing a game.

"Obviously last year making it into the grand final, we had a pretty strong side, so it was really hard making it into that side when we already had two strong rucks - we had Rhi (Rhiannon Metcalfe) and Caitlin (Gould) both in there.

"So he just said your time will come and when it comes, just enjoy it."

Adelaide is flying high again in 2022. Currently undefeated through the opening five rounds and with wins over other premiership contenders Melbourne and Brisbane, as well as strong sides Carlton and North Melbourne, it'll take a strong side to knock them down.

The vibes are up and the girls are enjoying playing footy together, and it's making for some great wins so far in season 2022.

"It's just really fun. The group of girls I'm playing with are great, the vibe's really good around, even since the preseason, the vibe around the club's been really good, leading all the way up to the season," McKinnon said.

The Adelaide Crows return to Norwood Oval today, where they'll play the Western Bulldogs at 4:40pm ACDT to close out Round Six of the AFLW season.