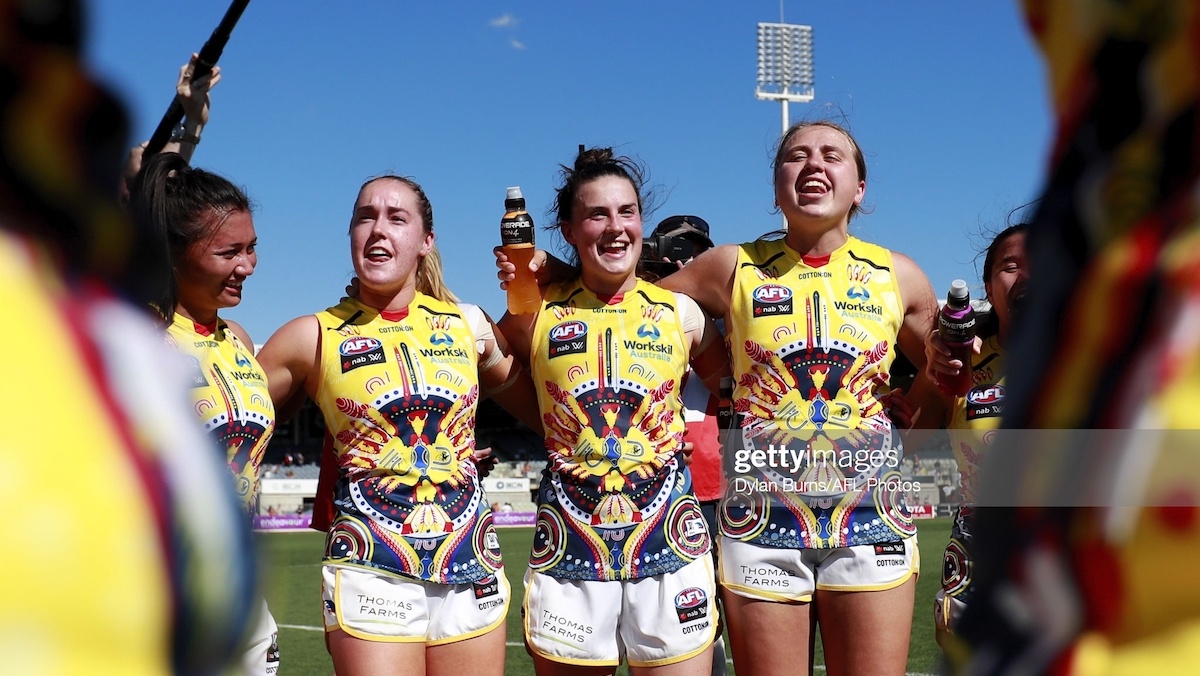 Adelaide Crows defender Chelsea Biddell says the connection is "unreal", as the team notches up another dominant victory over the Carlton Blues.

Adelaide Crows defender Chelsea Biddell says the connection is "unreal", as the team notches up another dominant victory over the Carlton Blues.

The Adelaide Crows have continued their emphatic start to the season, notching up another dominant victory, this time a 51-12 win over the Carlton Blues, and Chelsea Biddell says the "vibes are up" in Adelaide.

Speaking toEdge of the Crowdpost-39 point win, emerging Crows defender Biddell said her side's pressure and a relentless peppering of the goals pushed them ahead for a 5-0 start to the season.

"Carlton brought it, they were running at us, they're a running team, so they really wanted to run with us," Biddell said.

"But obviously our pressure is something that we pride ourselves on, and I think we brought that today, which is good."

Defensively, the Crows were impressive once again and their approach of focussing on what they do well, rather than stressing over what the opposition offers appears to be paying off.

"We work together as a unit really well and obviously our pressure up the ground makes it a lot easier for us.

"[The focus today was] just continue to do what we've been doing for the past four games and just work together."

The threat of Carlton's forward line, which includes the likes of star Darcy Vescio, Lucy McEvoy and Nicola Stevens, was not something the Crows chose to focus on, instead of backing their unit (minus captain Chelsea Randall) to get the job done.

"Obviously, we know that they're dangerous and that they could break again if they get the opportunity.

"We just had to back ourselves on what we're focusing on and just do what we're good at. And you know and that'll come."

Adelaide and Carlton had a host of changes for this clash, as has become a regular feature of team selections in 2022 with the AFL's Health and Safety Protocols adding to the normal injury challenges.

Carlton was excited to have Mimi Hill return from the ACL injury she sustained in 2021, as well as Grace Egan who had recovered from her nasty injury in Round One. Jess Good and Gab Pound were also back after two weeks out due to the AFL Health and Safety Protocols.

Good took over the rucking duties from Brea Moody, who was out due to the protocols, while Keeley Sherar missed with a broken hand, and Lauren Brazzale and Poppy Schaap were omitted.

The Crows camp also had players return from the Health and Safety Protocols - Danielle Ponter, Stevie-Lee Thompson and Justine Mules - while Teah Charlton missed due to these. Abbie Ballard and Jasmine Simmons were omitted, and Chelsea Randall was out with her hamstring injury from Round Four.

Hannah Munyard was also back after recovering from Covid-19 and hit the ground running with nine disposals and two clearances.

Anne Hatchard kicked the first of the afternoon for the Crows in a fairly even opening term. She was set up by a nice kick into the forward 50 and guided it home with ease.

The Crows peppered goals and Erin Phillips missed four attempts, but ruck Caitlin Gould made it a 16 point lead at the main break.

Carlton hit back to start the second half, the home side seemingly with more energy after the break. Darcy Vescio hit up Georgia Gee inside 50, who put it through the middle for the Blues' first on Sunday.

Ailish Considine kicked her first major for the year, and double her year-to-date in the fourth, while Ponter was back in the goals in her first match back post-isolation.

Eloise Jones added another to the tally and the Crows stretched out to an impressive 39 point margin.

Biddell said despite the missed chances early on in the game, her side felt they were close to breaking open the flood gates late in the third and were able to do so in the final term.

"I think we felt the goals coming, we were sort of peppering and we couldn't quite get them through the big sticks.

"Just towards the end, I think we just felt [that if we] kept that pressure up and we just kept peppering, that they would come and they did in the end, which is good."

There were some injury concerns for the Blues' who had a busy afternoon tending to Brooke Vickers, who left the field with an ankle injury. She did not return to the game.

Hill also went down with just a couple of minutes left in the game, after appearing to injure herself, but it was confirmed to be a simple cramp - not unexpected in her first match back.

AFLW ROUND FIVE: THE ROUND SO FAR

WHAT THE RUCK – PREVIEWING ROUND FIVE

Biddell might have found a new home down in the Crows' defensive end, the young gun has impressed in the backline during the first five rounds of the new season - earning praise from her teammates.

"I'm getting a bit comfortable back there, just sort of finding my feet," Biddell said after the win over the Blues.

"I'm playing some consistent footy, so yeah, it's good back there - found my calling I think!"

She's working on her defensive tactics, which is a switch in mindset from her previous position as a key forward, but with a great contested mark she's already dominating in the new role.

"As a defender you have to be pretty physical, so [I'm] just focusing on that and making sure I bring that to every game so that I can stop players when I need to."

While the "vibes are up" and the "connection is unreal", the Crows' aren't getting ahead of themselves, focussing on each round as it comes - especially given the uncertainty of the 2022 season.

"We have training tomorrow night so we just got to find a way to refocus and focus on next week."

Carlton is scheduled to travel to Perth next weekend to face Fremantle, while Adelaide is expected to host the Western Bulldogs at Norwood Oval.