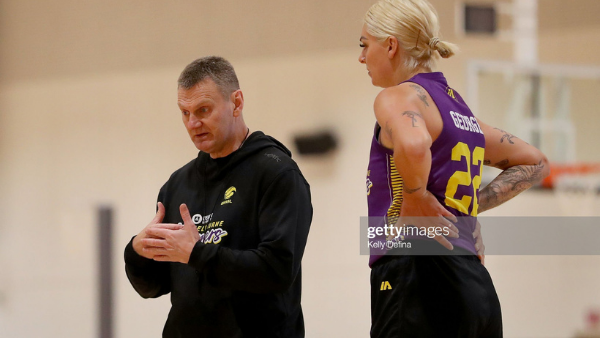 Cayla George: 'Molloy made me a better person and a better leader'

2022 marks the final year of Boomers coach Guy Molloy at the helm of the club, Edge of the Crowd speaks to captain Cayla George on his impact at the club.

Cayla George: 'Molloy made me a better person and a better leader'

2022 marks the final year of Boomers coach Guy Molloy at the helm of the club, Edge of the Crowd speaks to captain Cayla George on his impact at the club.

Over the weekend, the Melbourne Boomers won the minor premiership for the first time since 2011. That was also the last season they won the championship.

While the minor premiership isn’t the only thing playing on their mind with coach Guy Molloy who has been at the helm of the Boomers since 2013 will depart the club at the end of the season to coach over in New Zealand.

While over the previous seasons the Boomers have had a talented team, for Captain Cayla George there is a different vibe around the team this time around.

"It's Guy's last year, all the teams will be really hungry though and regardless of last round results, I think final time is always really different.

"I think it's where we've headed in the right direction. We've had some pretty ordinary losses but so has everyone, we're only human.

"I think for the most part, we've come together at the right time and want to make a pretty big bold statement in the final so I'm excited for what's to come and I'm excited to do it with this group."

Molloy and George have formed a close bond since she joined the Melbourne Boomers for the 2017/18 season.

"Guy was a huge reason why I came down to the Boomers from Fire, obviously I had a really successful time at the Fire, three years and three championships.

"So leaving there although it wasn't a difficult decision because I was ready to move on it was certainly a bit of a bold one, especially with the success we've had there, that I'd had there as well.

"So he was a massive reason that I wanted to see what it was like to play for him. I'd heard great things about him and I wasn't disappointed when I got here and he took me under his wing and showed me a great amount of respect.

"He showed me obviously a lot of on-court things to help improve my game but most importantly, I think he made me a better person and a better leader.

"I'll always forever respect and cherish that and our relationship as player and coach exceeds that, we're friends we're mates, he's like a dad figure to me.

"So we will forever communicate after the season probably at least once a week if not more, maybe less as he gets busy with the new season but we certainly yeah throughout all these lockdown periods we'd constantly catch up and he's always checking on me and I mean I'd check on him too but we've just got a really close relationship and I'll forever cherish that."

The chance to send Molloy out on a championship is at the back of the Boomers' minds, although it's not the sole focus.

"That's obviously been at the back of my mind all season but it's also not my pure focus as well. I think that if I made it my pure focus, it'd be quite distracting. I'm a bit of an emotional ball as are most of us players and especially when it comes to Guy, especially us, ones that have been coached by him for a long time.

"It's there that just in the background like we're just kind of going about our business which kind of just really trying to stay focused on you know each task at hand and not go too many steps ahead because that can be a distraction in itself.

“As much as this win would be really great for guys last year and I think it would be great for not only that but the club, us girls especially ones that have been here for a hot minute trying to win a championship at the Boomers.

"I think it's for a lot of people but a really great send off for Guy for sure."