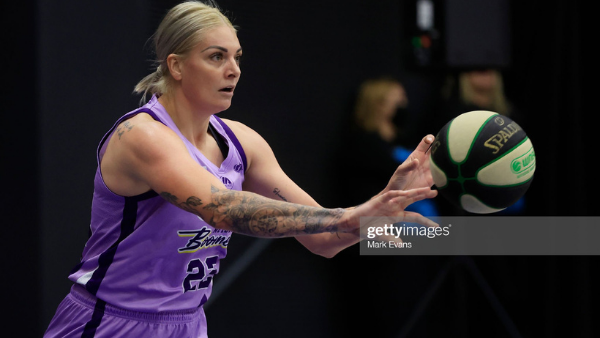 Cayla George: 300 games and a championship in sight

Cayla George notched up her 300th game in recent weeks, Edge of the Crowd spoke to her as she looks back on her career and looks ahead to finals.

Cayla George: 300 games and a championship in sight

Cayla George notched up her 300th game in recent weeks, Edge of the Crowd spoke to her as she looks back on her career and looks ahead to finals.

A key part of the Boomers' success so far this season is captain Cayla George who has played a key role in getting the Boomers to where they are ahead of the finals series which kicks off on Thursday.

George made it to a special milestone this season, playing her 300th game against the Adelaide Lightning back in Round 14.

"It wasn't a part of my goal growing up like to hit 300 or a certain number of games in the WNBL," George toldEdge of the Crowd.

"It's not something you really aspire to do in terms of big goal setting but it certainly was a really cool moment in time to reflect about my career to date and the people I've met along the way which is probably the best."

The milestone match was played in Adelaide which is George's home state, so she got to celebrate the milestone with friends and family.

"Adelaide is my home. I grew up there, so that was kind of cool to get, you know, my 300 notch there in Adelaide.

Reflecting back on her career so far, there have been lots of highlights for George, not just in the WNBL but on the world stage playing for the Opals as well.

"In terms of WNBL probably my first championship with the Fire and then obviously the other two are really great as well but again, it's probably just the people I get to meet and play with along the way."

Izzy Wright, Lily Scanlon, Penina Davidson, Lou Brown and recently Carly Ernst have all made a massive impact on the side across the season

“I think it's really important we've got a few close back to back games like Thursday and Saturday, with a bit of travel in between.

"Carly Ernst, she's respectfully been a starter her whole career in every other team that she's played for and she literally was having a baby when we started preseason.

"So for her to come January time and get back into the swing of things like she has, has been super impressive and we love having baby Kylan around as well.

"She's been really impressive with what she's been able to do as a new mum and how quickly she's gotten into the swing of things but her along with the other names you mentioned coming off the bench and Lily Scanlon as well. That's been really, really great for us this season."

The Boomers will be coming up against the Lightning on Thursday night in game one of the semi-final, with George and her side planning on bringing the energy.

"I think, turn up and bring energy and when we do that we've been pretty successful and consistent energy and then obviously a game plan but I'm not gonna tell you what that is.

"I think for us our own energy and then I mean finals time that you would think that that would be there anyway. I think it's about us and how we mentally rock up and bring that energy and then we'll see how the game flows from there"

The Melbourne Boomers will take on the Adelaide Lightning in game one of the semi-final on Thursday night at Melbourne Sports Centre at 7 pm.