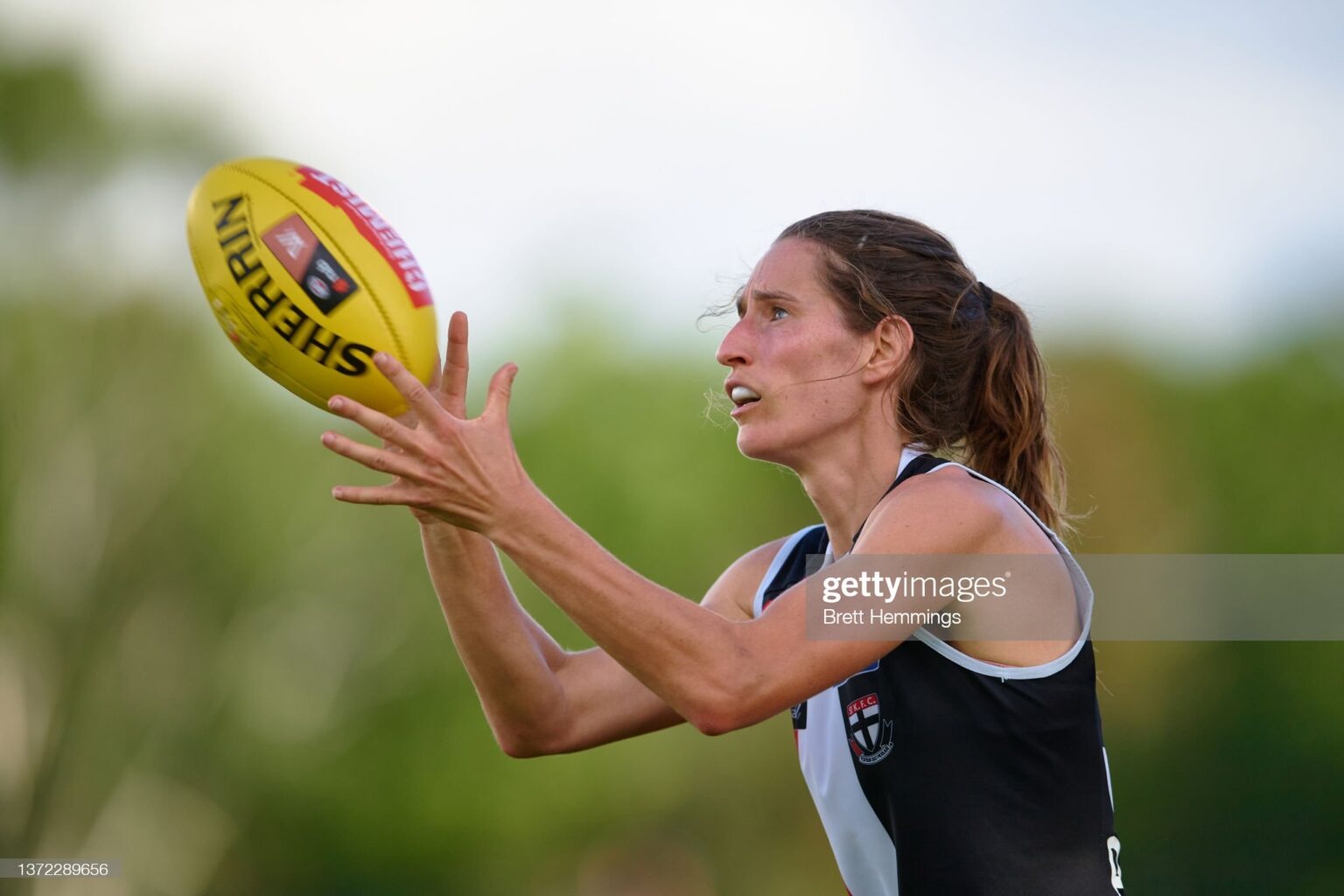 Cat Phillips pushes for the forces of change in AFLW

Cat Phillips has been a rock for St Kilda in the early years. She's seen plenty, and knows its time for positive change for gender equity.

Cat Phillips pushes for the forces of change in AFLW

Cat Phillips has been a rock for St Kilda in the early years. She's seen plenty, and knows its time for positive change for gender equity.

Cat Phillips may not be the loudest voice on the field, or off it, but make no mistake, when the St Kilda veteran speaks, she speaks with power and authority. The winger has been a key part of St Kilda's late-season revitalisation, but she has her eye on the big issues in the game.

Phillips has been in the AFLW system for a few years now, first for Melbourne Demons, and then as a foundation player for St Kilda Saints. In all her time in the game, Phillips has juggled a full-time career, an Ultimate Frisbee career, and an AFLW career.

With her wide-ranging experience, Phillips thinks deeply about the state of the game, particularly the women's game. And while she doesn't have an official seat at the negotiating table, she still has a strong view of where the game needs to go next.

Phillips spoke exclusively toEdge of the Crowdabout the importance of joining with the men's players for the next Collective Bargaining Agreement (CBA).

"I think it would be a really powerful message to be united into trying to learn where possible and obviously cricket have done that and they've been really successful because of that," she explained.

"Over the next couple of months that will be something that the PA (Player's Association) will work with the two playing groups on. I think it will, it will obviously be really difficult to come up with something together when the playing groups are so different and diverse and have different priorities.

"Hopefully, over time as the AFLW becomes more full time, it will be easier to get alignment in what the two groups want."

Phillips also explained that full time is all well and good in theory, but if not properly considered, could do more harm than good.

"There's probably still not quite clarity around 'what does full time actually mean for the female athletes?'

"One of the things that is really great about the AFLW is that players can have time to do other life development outside of football, and particularly when, presumably we're not going to get to pay equity for a little while longer.

"In a world where you know, if you're working 40 hours a week and you're only earning minimum wage, then that's maybe not a great outcome for the for AFLW players, so I think finding a full time that would be more like full time but you can still, you know, study part-time or work part-time to kind of help you along."

Pay equity and full-time pay are important issues, as every year female athletes leave the AFLW to pursue other sports, or to leave football in search of a paying career that gives them financial stability.

JEMIMA WOODS: FROM TRAIN-ON TO THE AFLW

For the AFL to get serious about equity and equality, players must not be forced to choose between pursuing their dream of playing AFL and having financial security. It is a key issue that needs to be addressed sooner rather than later so that it doesn't remain a structural issue.

With a full-time career as a Commercial Adviser at a major energy company, Cat Phillips is one of the hundreds of players who have juggled a shifting schedule through the season with her annual leave. There have been multiple instances of St Kilda's games being shifted through Covid-19 protocols.

Phillips explained that she, and so many others, have struggled with the fluid fixture, and sees the lack of planning for it as an oversight by the AFL.

"It's really tricky, like, I know, we had a period where we had a game that was scheduled for Thursday and then Friday, and then it got cancelled and there are people that took all of those days off work, and then there's no kind of compensation for that, they ended up just having time off work for nothing.

"I'm one of those people where every day of annual leave is like a godsend for me. I don't have annual leave to be throwing away on nothing. So I think that's really tricky.

"I think when like there's an article that came out recently about like all the preparation that was being done to support the men’s season happening and making sure that they had enough players and that they were really well prepared.

These issues are why the next AFLW CBA is crucial for the growth in the game. Cat Phillips doesn't see herself as a player likely to play full-time football at the expense of her career, but that doesn't mean it's not important to her younger teammates, and she doesn't wish she'd had the chance.

"I think by the time they go full time, I'll be probably getting booted out anyway. I doubt that I would give up my full-time career to play football. If I was 18 I would have loved the opportunity but I think I'm too far gone now," Phillips said.

And so, this year, it's time for the AFL to make sure that the AFLW is not sidelined. The men's and the women's playing groups need to come together to thrive, to get the best outcome for everyone.

For the fans, for the league and for the players. Just because it has taken time doesn't mean that more time should pass, and Phillips hopes that the best outcome prevails.

"I think the main thing with the CBA will be really interesting when that comes up and I hope we get to an outcome where like the male players and female players working together and empowering and supporting each other to get a good outcome for everyone."