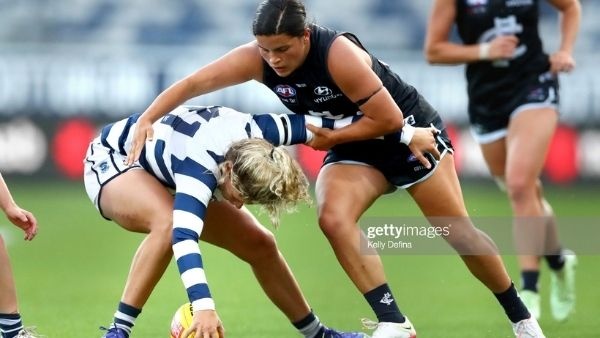 Carlton get first win on the board as Maddy Prespakis stars

Carlton was able to get the side's first win for 2022 after a win over the Cats down the highway in the game dubbed as the Prespakis Cup.

Carlton get first win on the board as Maddy Prespakis stars

Carlton was able to get the side's first win for 2022 after a win over the Cats down the highway in the game dubbed as the Prespakis Cup.

Carlton was able to get on the board for the 2022 season after a 14 point win over Geelong down at GMHBA stadium.

In the game that was dubbed the Prespakis cup, it was Maddy that was able to claim bragging rights and the four points.

Carlton skipper Kerryn Harrington was able to weather the storm playing that spare role that allowed her to get intercepts.

Once Carlton got its first inside fifty it wasn't too long until the Blues were able to get onto the scoreboard with Elise O'Dea kicking the first goal of the game.

Carlton flipped the switch in the second quarter being able to have the ball in the Blues front half.

Rachel Kearns kicked the first game for Geelong late in the second term after Gab Pound gave away a 50 metre free kick to put Kearns in range to kick her first AFLW goal.

After dominating most of the second term the Blues were finally able to get some reward for effort with Nicola Stevens kicking a goal with a nice set-up kick from second gamer Courtney Jones.

Carlton dealt the first blow of the second half with Jones once again proving dangerous in the forward fifty.

Geelong once again showed glimpses but didn't get that reward for effort only having four behinds to show for it.

Geelong got the first goal of the last term thanks to a goal from experienced forward Phoebe McWilliams, keeping the Cats in the hunt with the margin at seven points

Georgia Gee closed the door on a Cats come back and give her team back to momentum with a nice goal.

Harrington and Maddy Prespakis were among the best for the Blues having 21 and 29 respectively.

Harrington was instrumental down back having a 100 per cent kicking efficiency with 16 kicks.

Rebecca Webster and Amy McDonald starred for the Cats with 21 and 20 disposals respectively, with last week's rising star nominee Georgie Prespakis not too far behind on 15 disposals.

Carlton will head to Whitten Oval next week to face the Bulldogs on Sunday afternoon in the annual pride match, while Geelong will take on the red hot Collingwood back at GMHBA Stadium on Friday Night.