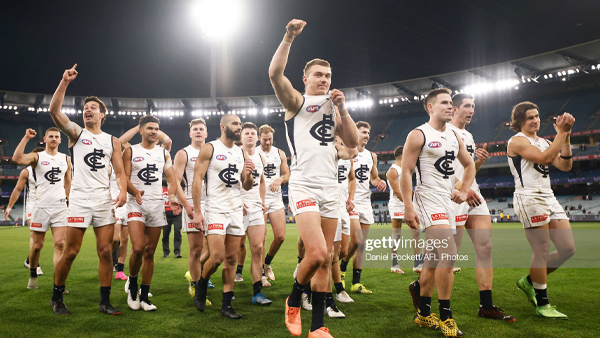 With a host of returning players and off-season pick-ups, including a new coach, the Carlton Blues will be searching for a rise up the ladder and return to finals in 2022.

With a host of returning players and off-season pick-ups, including a new coach, the Carlton Blues will be searching for a rise up the ladder and return to finals in 2022.

The Carlton Blues took a slight step backwards last year in a season that saw veterans call time, but with a host of new additions to the squad, plus a new coach in Michael Voss at the helm, the club will look to return to the finals for the first time since 2013.

Carlton was a competitive team in 2021, winning games the club was expected to, and more often than not, the matches the club did lose were rarely above the five-goal margin, signalling the side was able to keep themselves in the contests.

However, due to a lack of on-field results and the playing group's faith in David Teague declining, he was let go at the end of the season, resulting in former Brisbane Lions player and coach Michael Voss being offered, and accepting the role.

Many of the off-season departures were out of the control of the club itself, with veterans leaving, announcing their retirements. However, the club was busy throughout the trade period, picking up handy players that can be versatile and cover all areas of the ground.

Carlton's only hitout of the pre-season so far saw the club claim aseven-point victory in a practice game against St Kildaas captain Patrick Cripps lead the side in the middle with new acquisitions George Hewitt and Adam Cerra, while the make-up of the forward line adapted without Harry McKay, who missed with a foot injury.

The Blues will need to improve upon their ball use around the ground, as it became a cause of concern and frustration at times throughout last season, with opposition teams quick to pounce, especially if it was in the defensive end. Carlton's defence was shaky at times throughout its campaign last year and will want to tidy it up if the club is any chance of putting a stop to the opposition's scoring.

The Blues will also be hoping they can get quality ball movement from the centre square stoppages, and be clean with the use of the ball to launch attacks inside 50, but at a controlled pace too, with the forward line's talls capable of taking contested marks and contributing on the scoreboard.

The Blues showed signs of improvement at times throughout 2021, a taste of their potential, however, the resulting form failed to live up to the expectations that were put on them at the start of the season.

The Blues struggled to navigate through the injuries to Sam Docherty, Harry McKay, Patrick Cripps and Charlie Curnow, or have them at the required level they've shown to perform to a high degree in the past and within their normal game.

However, while the Blues did find some wins - including a 16-point win over top-eight side Essendon in Round Seven, kicking their highest score of the season (123 points) - the worst of it was in Round 22 where they suffered a 95-point loss to Port Adelaide and reminded fans how far the club was still yet to come.

HAWTHORN AFL SEASON PREVIEW: THE DAWN OF A NEW ERA

Carlton's biggest strength will be the versatility of its players, with many on the list capable of playing in a variety of positions, sharing the workload, but at the same time, being able to cover any part of the ground that needs help, especially through injuries. Mitch McGovern and Lewis Young are prime examples, while Tom de Koning can swing between ruck duties and the forward line.

Carlton's forward line will be a big factor to its 2022 campaign, with reigning Coleman Medallist Harry McKay - who kicked 57 goals last season - returning, as is Charlie Curnow, both to be aided by Jack Silvagni who's really starting to show his potential output. This particular forward trio will have the weight of the club on their shoulders in 2022, as it will be important to work together to register plenty of scores.

Given the ages of McKay, Silvagni (both 24 years old) and Curnow (25 years old), the future-forward line at Carlton is hoped to be on show for the entire season, with plenty of years left in the trio, and plenty of chances to show just how much the partnership can grow, with the right support such as the likes of youngsters Lachie Fogarty, Matthew Owies and Josh Honey.

The Blues' defensive worries are their biggest weakness, having conceded the second-most amount of points in the league last year (1971), only behind wooden spooners North Melbourne.

The backline for the Blues in 2021 was led in large part by intercepting defenders Liam Jones and Jacob Weitering. Though the former has left the club, the off-season addition of Lewis Young should be a like-for-like replacement, although it remains to be seen how much the former Bulldog will fit into the structure, especially as his services varied in a 24-game five-season stint at his previous club.

The return of Sam Docherty should do wonders to the Carlton backline too, with the former co-captains sole focus now being on himself and the team, without the added pressure of the role, his presence down back will be positive, that hopefully the side can learn from, and work with to be better.

The Blues were the team with the third-highest clanger count in 2021 (49.5 per game), and with the constant pressure the backline will be under, don't want any repeat of that in 2022. The Blues' disposal efficiency throughout 2021 was 66.9 per cent, a competition low.

The Blues also lacked grunt and desperation for the contest, ranked fourth for the most tackles laid, indicating a need to get to the ball first to have a greater chance of clearances - which they ranked fourth for stoppage clearances (21.4 per game), and moving the ball into areas that benefit them and away from trouble.

Matthew Owies has the potential to be a 30+ goal a year small forward for Carlton for years to come, and really came into the fold of the team lineup in 2021 where he kicked 15 goals in 13 games. After playing just one game in his debut year in 2020 against Sydney, Owies was utilised in the middle part of the season last year, and used his time in the main team well, taking his opportunities.

Proving himself to be a crafty forward, he got on the scoreboard in all but one of his 13 games and was useful in keeping up pressure inside 50, with 38 tackles across the year. A confident player who demonstrated a determination to attack the footy or the player but also finds space inside 50 to take marks which turned into shots on goal should see Owies given a full season to show his skills even more.

Carlton will have some key position players returning after long stints on the sidelines, or recent lack of game time, namely Sam Docherty - who will return for the first time since undergoing surgery for an acute syndesmosis injury - and Charlie Curnow - who played the final four games of 2021, having not featured since Round 15, 2020 up until then -, each helping in their respective ends of the ground.

There's an expectation that the side's performance will improve in 2022, but the eagerness and toughness will need to be identified early on in the season, for the benefit of announcing themselves to the league, but more so in getting off to a good start and remaining on-par with the stronger teams of the competition.

New coach Michael Voss has had plenty of time during the off-season to drill into his playing group the important factors to focus on and go over his own gameplan that might have the Blues destined to surprise many within the football community and potentially cause some upsets like they showed glimpses of doing so last season.