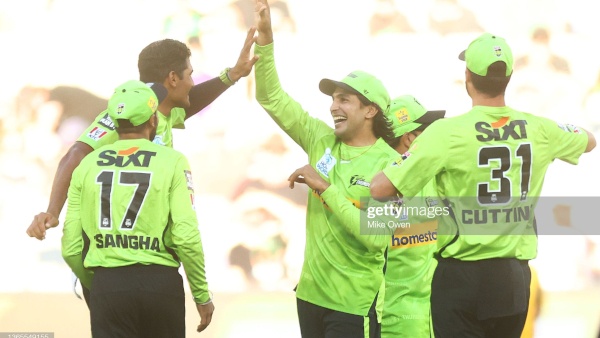 Cameron Boyce shines, but Thunder leave with the win

Cameron Boyce shines, but Thunder leave with the win

The Thunder came out firing in the power play, finding the boundary six times, to rush off to a score of 0/54 after four overs.

This, however came to an end with Alex Hales not getting enough behind a shot off Cameron Boyce, and found the hands of a fielder on the boundary. He departed for 44 runs off 22 deliveries.

Jason Sanga was next up to bat, but a complete misreading of a delivery gave Sam Harper an easy stumping, putting Cameron Boyce on a hat trick

The hat trick delivery seemed to hit the bat of Alex Ross, but was given out LBW by the umpire. Boyce continued this form by getting out Daniel Sams out LBW on the next delivery.

The Renegades failed to get a fifth consecutive wicket, despite the pleas of Aaron Finch to the umpire, arguing that Matthew Gilkes took too long to get to the crease.

The Thunder stumbled to 4/93 at the halfway point.

Gilkes ended the streak of golden ducks, but did not last much longer, falling for only two runs off four deliveries, as Cameron Boyce’s fifth wicket of the innings.

Despite not having a consistent partner up the other end, Khawaja managed to bring up his 50, after 36 deliveries.

With Khawaja and Cutting building a partnership, Sydney took the power surge for the 15th and 16th over, gaining them 15 runs.

Cameron Boyce kept managing to find ways to prevent the Thunder from building partnerships, running out Ben Cutting for 20.

Khawaja easily clicked into the Thunder lineup after spending most of the summer with the test squad. He finally departed in the 19th over, bowled by Zak Evans, for 77 runs.

Needing a significant increase to their net run rate, a final total of 170 set a challenge for the Thunder bowlers.

With some sloppy fielding from the Thunder, Melbourne moved to 1/34 during the powerplay.

Chris Green, lining up to take a catch, only to deflect the ball over the rope for six, was a good summary of the Thunder’s efforts in the field.

Tanveer Sanga eventually got the breakthrough for the Thunder, forcing Shaun Marsh to depart for 19.

At the 10 over mark, the Renegades were 2/77, 16 runs short of the required total for the Bash Boost.

In just his second game for the Renegades, Unmukt Chand batted well alongside Aaron Finch. But he hit one straight to Chris Green to depart for 29.

Two excellent plays in the field removed the set batters. First, Jason Sangha, diving to the ground, ran out Sam Harper for only one run.

This was followed by the key wicket of Aaron Finch, who mistimed a shot to Daniel Sams. This left two new batters, Will Sutherland and Cameron Boyce to face the final three balls.

With a six and a single off the first two balls, Will Sutherland left Boyce to face the final ball. The Thunder needed two runs to win, or one for a super over.

Boyce, however failed at his chance to play the hero, and departed for a duck.

“We’re a team that can beat the Scorchers again, and also take it to the Sixers as well” Gurinder Sandhu described, of his team heading into the finals.

The Thunder will play the winner of the first finals match, between the Strikers and Hurricanes, to begin their finals campaign.