After just missing the finals last season, can the Bulldogs bounce back to be a flag contender? 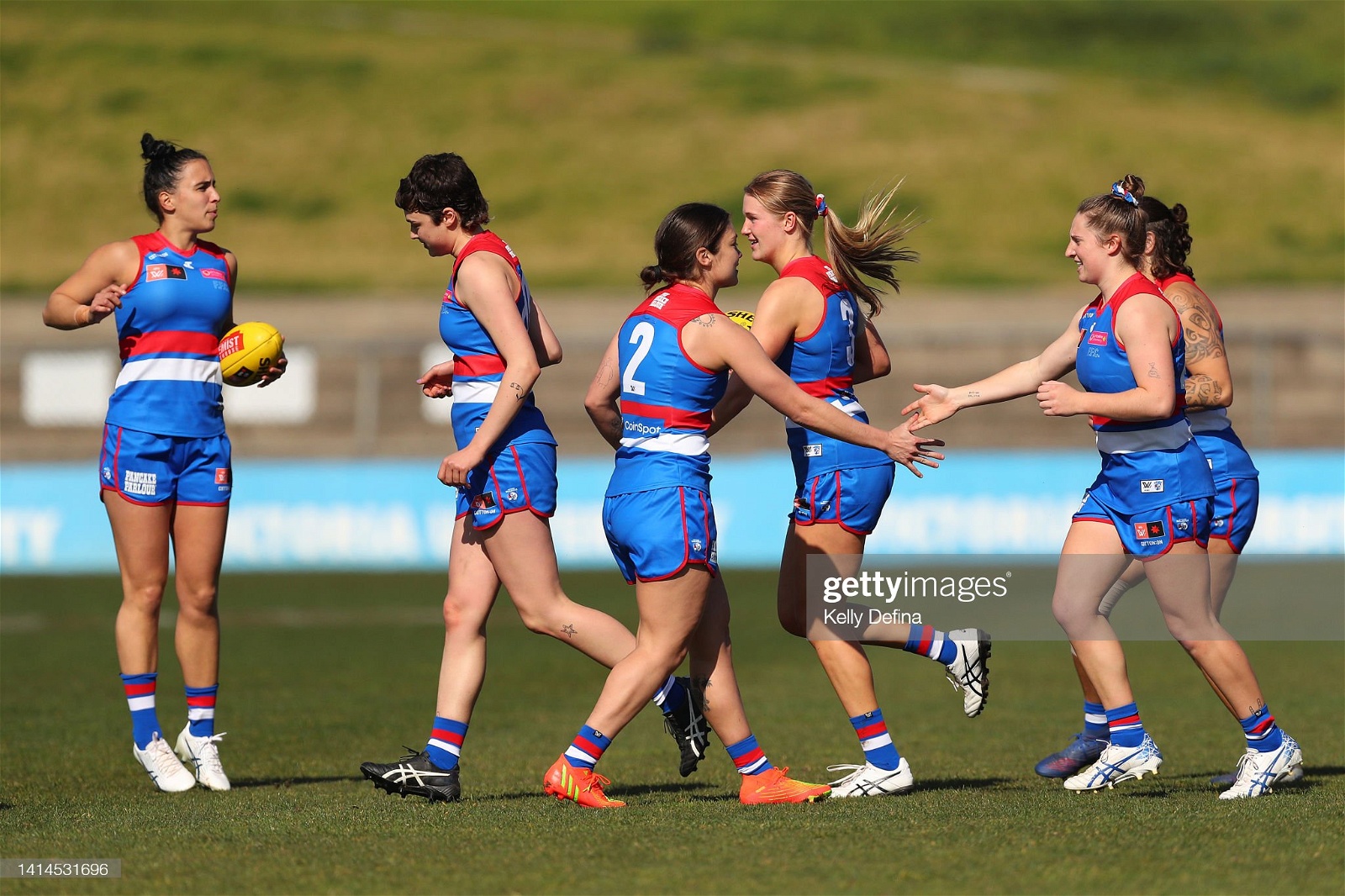 MELBOURNE, AUSTRALIA - AUGUST 13: Jessica Fitzgerald of the Bulldogs (L) reacts with Ellie Blackburn of the Bulldogs while the team runs out the AFLW Practice Match between the Western Bulldogs and the Greater Western Sydney Giants at Whitten Oval on August 13, 2022 in Melbourne, Australia. (Photo by Kelly Defina/Getty Images)

It took the Bulldogs until round five to win their first game in the competition last season. The Bulldogs stormed home in the second half of the season, including a win against Premiers Adelaide but just missed out on finals by one position.

The Bulldogs' 7.8 (50) one-point pre-season loss to the Giants 8.3 (51) shows that they are ready to attack the season straight away and not have an inconsistent performance like last season.

Although the Bulldogs had terrific wins last season, they lost a lot of matches quite convincingly, which cost their season to play finals for the first time since 2018.

The Bulldogs lost their matches by an average of 21.8 points. Most of their losses were due to poor accuracy in front of goals. The Bulldog's accuracy of 10.8 (68) against West Coast shows how powerful they can be in front of goals and the fact they took out the premiers the same season.

The Bulldogs would want to be focussing on their consistency throughout the season. The Bulldogs only won one game in their first five matches, which was crucial to them in only a ten-match season.

The Bulldogs scored 2.9 (21), and 2.7 (19) back-to-back weeks in matches they would have won if they were efficient with their kicking. The Bulldogs were only 6 points on the ladder out from making the finals series last season; this is a critical area that will make them a threat to come against if they can work on it.

The biggest strength the Bulldogs have is the depth of players on their list. Besides Hannah Scott retiring and Izzy Huntington, who departed to the Giants, the Bulldogs kept many of their players, unlike their opposing teams.

Especially with four new teams entering the competition wanting to pinch players from existing clubs, the Bulldogs kept a strong side together and will be a strong playing group this season.

Apart from the existing players who stayed with the club, the Bulldogs gained to their list Millie Brown and Daisy Bateman, adding excellent depth to the club's list.

Defence will be the Bulldogs' main area they need to focus on before their season commences. The Bulldogs conceded a high score against them last season, and the retirement of Hannah Scott as a brick in the backline will hurt the Doggies.

A key element that will help the Bulldogs improve this season will be their tacking pressure which they had the fourth least tackles amongst any other team. The Bulldogs need to focus on tackling pressure and their defence to concede less on the scoreboard and win matches.

The loss of the number one draft pick and rising star Izzy Huntington, too, is a significant loss for the Bulldogs. The number of players picked up in the draft will help the Bulldogs from her departure.

This season's breakout player will be Nell Morris-Dalton for the Western Bulldogs. She has shown in her debutant year the game changer she can be for her club.

She is a bright and athletic key forward, converting seven goals and only one point last season, the efficiency that the Bulldogs need to win matches. Her full potential is yet to come only aged 21; she will be threatening to play against this season.

Although the Bulldogs look to have a strong list, their players are still young and will develop in their first few years. The losses of Huntington and Scott, although only two players, is huge given their contribution to and work rate to the club.

The Bulldogs will be dominant in years to come. Unfortunately, this year, they look to miss out on the finals again.