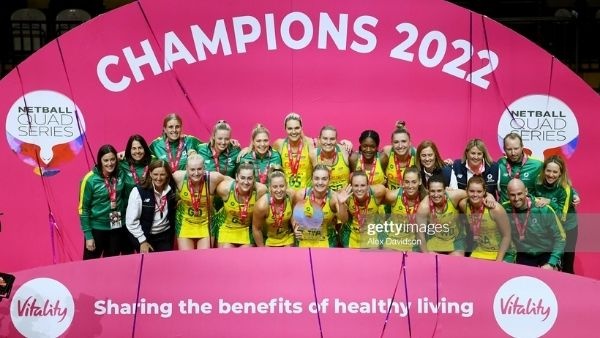 A dominant last quarter saw the Diamonds win the Quad Series with a 58-46 win over the Roses with Gretel Bueta and Sarah Klau being instrumental in the win.

A dominant last quarter saw the Diamonds win the Quad Series with a 58-46 win over the Roses with Gretel Bueta and Sarah Klau being instrumental in the win.

A dominant last quarter has seen the Australian Diamonds claiming the quad series win after defeating the England 58-46, silencing critics that they have what it takes to win it on the big stage.

Despite the immense pressure from the England midcourt, it was Bueta who opened the Diamonds account with three quick back-to-back goals.Helen Housbypicked up where she left off sinking the first goal for the Roses.

A couple of wayward balls from the Diamonds allowedGeva Mentorto get possession back for the Roses and withEleanor Cardwellconverting quickly down the other end it was all tied up with nine minutes to play in the first.

After a deflection fromLayla Guscothwhich was picked up byNat Metcalf, the Roses were able to take the lead late in the first quarter.

England was able to keep Australia at bay going into the first break with a two point lead, with their pressure immense especially in the centre third making it extremely hard for the Aussies to transition it into the goal third.

A tip from Weston allowed the Diamonds to get within a point of the Roses with Bueta sinking in down the other end.

Although, England was able to regain possession thanks to Guscoth on Australia's centre pass, taking the lead back out to two.

A call against Hadley in the centre allowed the Roses to extend their lead to four points towards the end of the second quarter.

The Roses continued their fine form into the second quarter going into the main break with a two point lead.

The third quarter saw Bruce come back on but this time into goal defence and England switching up the shooting end with Cardwell going out to goal attack with Housby going back to goal shooter.

An intercept from Klau allowed the Diamonds to bring it back to one and with the Diamonds getting the next centre pass, Bueta was quick to tie the game.

A tip from Klau brought the Aussies in front for the first time since early in the first quarter with Bueta putting the Diamonds ahead.

Jess Thirlbyswitched things up in the middle with Laura Malcom going into centre and Serena Guthrie going into wing defence which the change made an immediate impact allowing the Roses to tie the game up.

A late turnover from the Diamonds denied them the chance of drawing the game level with England going into the last quarter with a one point lead.

Weston came on to start the last quarter to attempt to stop the dominant Cardwell who came out hunting early with a few attempts to reclaim possession.

An intercept from Klau gave the Diamonds a chance to go up by two but a turnover in the Diamonds attacking end gave possession back to England.

Although, with Malcom taking the ball out of court the ball was back in the Diamonds hands with Bueta sinking the shot and the Diamonds were up by two.

The Diamonds pressure was on in the Roses attacking end with the Roses getting called for held ball with the Diamonds extending their lead by four.

The combination of Klau and Weston worked wonders in the defensive end helping the Diamonds take the lead out to eight points with five minutes to play in the last quarter.

With under two minutes to go, Australia had extended its lead to 11 points silencing the England crowd at the Copper Box.

It's the first trophy into the Diamonds trophy case since coach Stacey Marinkovich took over the Diamonds coaching reigns in 2020.

It was Bueta's first international series since having her son Bobby who joined her along with her husband Niko in England, which Bueta said was super special.

"I think it's really special, really proud of the girls, how we just grinned out that game," Bueta said post match

"I think the connectiveness of the team showed today out on court, so that was really exciting. To have my family here it's super special and I can't thank Netball Australia enough for allowing me to bring Bobby and my husband with me, they've definitely been embraced by the team."

Marinkovich's message to the Diamonds going into the last quarter was just to stick to the game plan.

"As simplistic as that sounds when you've got such an experienced team in England and the way that they play we needed to smother them, we needed to make sure that in attack that we were patient and felt comfortable with options ahead and behind the play."