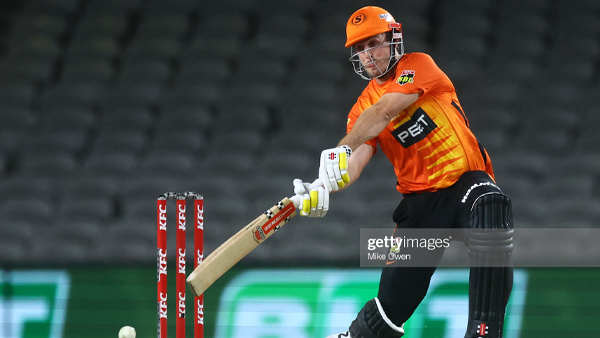 Max Bryant's score of 81 wasn't enough for the Brisbane Heat as Mitch Marsh powered the Perth Scorchers home with a destructive innings.

Max Bryant's score of 81 wasn't enough for the Brisbane Heat as Mitch Marsh powered the Perth Scorchers home with a destructive innings.

Max Bryant blasted a career-high 81 runs in a losing effort for the Brisbane Heat as they went down to the Perth Scorchers by six wickets after a Mitch Marsh masterclass with the bat that included facing every ball of the power surge, resulting in 36 runs to his, and his team's score.

Promoted back up to open the batting with Chris Lynn after coming in at five and sixth respectively in the past two games, Bryant beat his previous best score of 71* against the Melbourne Stars in Brisbane's final game of BBL|08.

Bryant was far and away the more attacking of Brisbane's opening batters across the opening powerplay period, smashing at least one boundary in each of the four overs - four fours and two sixes - to be 34 off 17 when the fielding restrictions changed for Perth.

Lynn meanwhile was rotating the strike throughout the same period, picking up singles - the only type of runs scored within his seven in total before he fell victim to a Mitch Marsh delivery in the sixth over, caught by Kurtis Patterson at long-on.

Bryant was dropped earlier in the same Marsh over when he punched the ball back to the medium pacer, however at a low height with Marsh unable to complete the one-handed attempt to his left.

The runs dried up following Lynn's wicket with Ben Duckett entering into the middle of Marvel Stadium, however, Bryant had other ideas, hitting Marsh for four in the eighth over, before bringing up his half century off the first ball of the ninth over, hitting AJ Tye for six over the rope at deep backward square leg.

The following ball, Bryant hit a four through the covers as the Tye over resulted in 14 runs coming off of it with he and Duckett rotating the strike for the remaining four deliveries.

Duckett became the second wicket, falling for six off 12, caught by Lance Morris at short fine leg, off the bowling of Peter Haztoglou, which brought in Sam Heazlett, who controlled a cover drive for four off the second ball he faced to get off the mark.

After finishing the midway point of their innings 2/77, Perth's spinners, Ashton Agar and Hatzoglou combined for the next five overs after the break and slowed down the run rate of Brisbane's attack going for five, three, six, five and four runs from the 11th to 15th overs respectively.

In that time, Agar got the wicket of Heazlett (10 from nine) given caught behind, and Hatzoglou the wicket of Nathan McSweeney (six off six), caught by Morris at short third man.

With the lack of runs being scored, Brisbane took the chance to use the power surge as Bryant was running out of batting partners fast, however, Jimmy Pierson proved his capabilities as a power hitter.

Bryant's night ended in the 18th over, trying to clear the rope at long-on, however found Patterson camped underneath the ball, who took the catch off the bowling of Jason Behrendorff.

James Bazley (nine off five) had a small cameo that included back-to-back fours off Tye before being caught by Ashton Turner in a running-back, over-the-shoulder catch heading towards the deep cover boundary.

Michael Neser was out for a golden duck when Behrendorff bowled the first ball of the final over, being caught by Patterson at long-on as Piersen and Mark Steketee batted out the over, the former finishing the innings at 7/155 with a six over midwicket.

In Perth's reply, Neser bowled well with four dot balls to start the innings but Patterson was seemingly growing frustrated, and got off the mark with a six over extra cover, and ended the first over with a four through the same spot. Josh Inglis hit his first boundary off the final ball off the third over from Bazley.

Patterson hit back-to-back sixes to begin Steketee's first over of the night (the fourth over of the innings) with shots over cover and square leg as Inglis then targeted Mitch Swepson with two fours coming in an 11-run over to end the fifth over.

Inglis (18 off 15) and Patterson (26 off 20) fell in consecutive overs, the latter caught by Heazlett at midwicket off the bowling of Neser, and the former caught LBW by Swepson.

With two new batters at the crease, Marsh and Colin Munro, it took some time for each of them to get their eye in - even if Munro did smash a four off Bazley -, with a potential ruling of a catch by McSweeney at deep square leg being judged as having touched the ground giving Munro a life before the drinks break.

The pair began to get going, each smashing a six in the two overs after the break before electing to take the power surge with Marsh facing every delivery - starting with a four to extra cover, and a six to backward square leg in the first Steketee over of the period.

23 runs came from the second over the power surge as Marsh began with a six off Bazley, broke his bat, and then it four fours in a row, the last in that sequence bringing up his half-century.

Marsh continued to dominate and looked unstoppable but edged a Swepson ball behind to Inglis which cannoned off his helmet, unable to be there at the end of the chase, departing for 59 off 34.

Turner became the destroyer, hitting two sixes in consecutive overs as the Scorchers needed under a run-a-ball to win and despite Munro (24 off 28) being caught by Neser off Matt Kuhnemann. The team needed nine off 12, with Turner (18* off 14) and Aaron Hardie (six not out off one) at the crease at the end, the latter hitting the match-winning six off Steketee into the crowd at deep backward square leg.

The Brisbane Heat's final regular-seasongame of BBL|11 is back at home at The Gabba from 12:05 pm AEST on Wednesday, January 19 against the Sydney Sixers while the Perth Scorchers, who finishes on top of the standings, play in The Qualifier on Saturday,January 22 against the yet-to-be-finalised second-placed team.