A list of all the instrumental covers that will intensify the season, again. 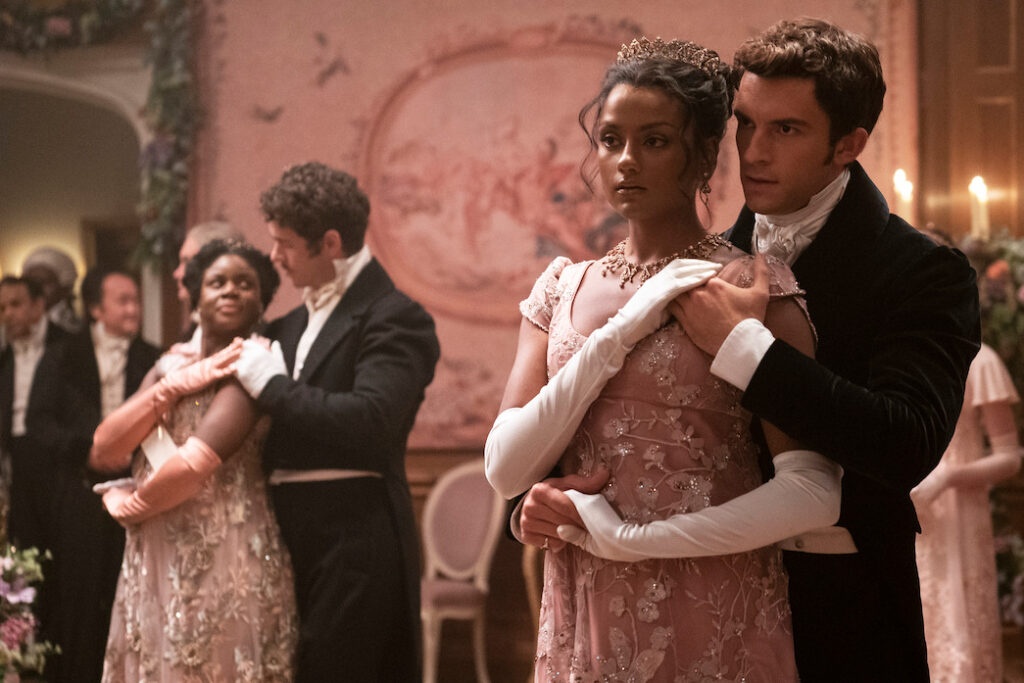 Season one featured all your favourites from Ariana Grande'sThank You Nextto Billie Eilish'sBad Guy. Now, here are all the instrumental covers that made it in season two.

After a total duration of 625 million hours watched,Bridgertonfinally premiered its new season onNetflixon March 25. The drama period piece made various headlines in 2020, presenting their viewers with a heartfelt twist of high society during the Regency era in London 1800s.

Producer Shonda Rhimes may have turned heads with an intense romantic showdown between ‘diamond’ Daphne Bridgerton and the Duke of Hastings. However, the soundtrack of instrumental pop covers is what elevated these scenes, which music supervisor Justin Kamps keeps bringing back.

Kamps gave us pop hits in the first season, with The Vitamin String Quartet covering Ariana Grande’sThank you Nextin the first episode during the annual ball. It resembled Anthony Bridgerton’s actions of thankfully skipping every suitor that looked towards his sister Daphne.

Dumo’s cover of Taylor Swift’sWildest Dreamsis another highlight. This cover comes to our ears during Daphne and Simon’s honeymoon montage, wandering off as husband and wife, living their wildest dreams.

Kamps explains in aninterview with Tudum Netflixthat these instrumental covers help the audience with their connection to the characters and era.

“It’s a good link for everyone to instantly recognise their own feelings in these characters that are in a very different environment than they are,” he said.

He also teases about the soundtrack for season three, which possibly have new covers of Olivia Rodrigo and Doja Cat.

“We did get some Olivia Rodrigo string covers this season, but just didn’t find the right place for them. So, that’s something I would like to include because I just think her songwriting is great and it makes for some beautiful string quartet version,” he said.

The first cover that is featured is an instrumental cover ofStay Awayby the Vitamin String Quartet. This fast tune from Nirvana’s 1991 album,Nevermind, reflects Anthony's search for a wife and his busy schedule of housework and dates. During this scene, he realises that he might need to stay away from these chosen few as he crosses out each woman's name.

When entering the first ball, the song of the evening is Madonna’s 1994 hit single,Material Girl, covered by Kris Bowers. It plays when the Sharma sisters open the doors to a couple of dancers, whilst Lady Danbury suggests fine partners during the dance number.

Another tune that is featured during the ball is Hannah V and Joe Rodwell’s cover of Rhianna’sDiamonds. A classic hit that follows the chapter of Queen Charlotte's annual choosing of the season’s ‘diamond’. As she glances across the room, she goes after Lady Dandbury's advice of Edwina Sharma being named the diamond to keep things interesting.

Dancing On My Ownby Robyn

When Edwina insists that Kate should dance with Anthony,Dancing On My Ownis the song of this special occasion, covered by Vitamin String Quartet. Robyn’s outlook on her song lines up with this scene, as Edwina finds herself standing in the corner, watching Kate come closer with Anthony.

‘90s phenomenon Alanis Morissette gets added to the soundtrack after a heated dinner at Lady Danbury's with Lady Mary's parents. Intimacy happens between Anthony and Kate, as Anthony conveys his passionate line: “You are the bane of my existence.”

When morning arrives, Kate and Anthony spend time alone to ward out their thoughts. Duomo’s cover ofYou Oughta Knowspeaks for the scene itself, as it becomes clear that there is desire between the two.

Indian culture is represented in this scene, as the Sharma sisters and their mother engage in a traditional Haldi ceremony before Edwina’s wedding to Anthony. The soundtrack, covered by Kris Bowers, comes from the 2001 Bollywood success,Kabhi Khushi Kabhie Gham.

Then comes the wedding of Edwina and Anthony. Thus, it becomes the perfect time for Harry Styles's song,Sign Of The Times, covered by Steve Horner. This cover portrays the fact that it’s supposed to be Kate’s and Anthony’s love story, instead of her sisters.

What About Usby Pink

In episode six, the plot shifts quickly as Edwina leaves Anthony at the altar, resulting in a failed marriage. Dumo’s cover of Pink’sWhat About Usbegins to play when Kate and Anthony share a moment from the two ends of the chapel.

How Deep Is Your Loveby Calvin Harris and Disciples

Towards the end of episode seven, Anthony and Kate's slow-burn romance finally kicks off as they rush to each other. The two cannot keep their hands off each other when Kiris cover ofHow Deep Is Your Loveplays in the background, highlighting that their love is never-ending.

The final cover is Miley Cyrus' singleWrecking Ball, covered by Midnight String Quartet. Anthony takes Kate’s hand and makes their way to the dance floor for their last dance at the Featherington Ball. This cover concludes their fiery love story, with fireworks shooting in the sky around them in the garden.

To listen to the full soundtrack of season two, here is theplaylistcreated byBridgerton.