Book Review: Where the Crawdads Sing - a beautiful story

Where the Crawdads Sing by Delia Owens is a New York Times best selling novel that has captivated readers through its coming-of-age narrative that intertwines a murder mystery with the beauty in nature. 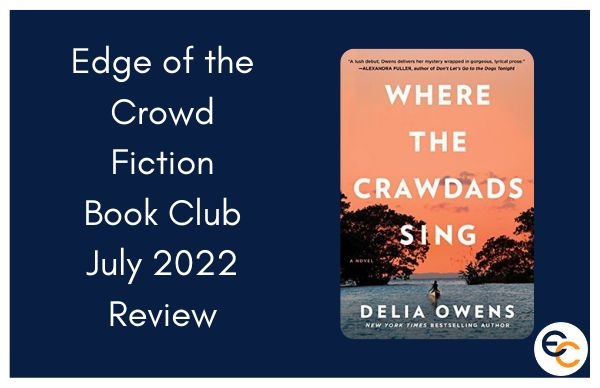 Edge of the Crowd Fiction Book Club July 2022 Review: Where the Crawdads Sing

Where the Crawdads Sing details the journey of Kya Clark as she grows up in the remote marshes of North Carolina in the 1950s and ’60s.

Alone from age 6, Kya learns to live off the land and support herself, finding solace in the flora and fauna of her natural surroundings.

Kya then meets Tate, a local boy who teaches her to read and write, and they fall in love over their mutual devotion to nature.

However, he soon leaves to attend college out of town, leaving Kya alone once again when she finally meets Chase Andrews.

Abandonment is one of the strongest themes throughout the novel and is highlighted by Kya’s independent attitude that was formed through her being left alone from such a young age.

Kya’s coming-of-age story alternates with a 1969 murder investigation of a local man, Chase Andrews, who was found dead in the marsh early one morning by two young boys.

As the town recluse, Kya is the immediate suspect and must stand trial for the murder. The trial brings Kya face to face with everyone who has spread vicious rumours about her whole life.

While the first timeline has beautiful imagery of nature, it is difficult to reach the main action of the book as it feels like it drags on in moments.

"A swamp knows all about death and doesn't necessarily define it as a tragedy, certainly not a sin."

The second timeline compares to Harper Lee’s To Kill a Mockingbird, with Kya’s lawyer Tom Milton defending Kya despite being ostracised by the Barkley Cove townspeople.

The trial portion of the novel is much more engaging with the fast pace of the murder mystery unravelling for readers.

Ultimately, Kya is found not guilty of the crime; however, it is later revealed that Kya did, in fact, commit the murder despite her tight alibi.

The closing twist at the end of the novel is extremely well written, and the most memorable oddity as readers find out the truth about Chase’s death.

The alternating timelines give a full picture of Kya’s life with the prejudices she faces.

The plot has something for everyone with its combination of romance, murder mystery, a celebration of nature and a coming-of-age survival story.

There has been recent controversy surrounding the novel and subsequent film, with eerie parallels of Owens's own life to that of Kya’s. As a nature lover herself, Owens has worked as a conservationist her whole life and has based much of the story around her own experiences.

Owens has found herself at the forefront of a murder investigation into an alleged poachers death in Zambia in 1995, when she was there for conservation work with her then-husband, Christopher, and his son, Mark.

Where the Crawdads Sing has been adapted into a film and is in cinemas now.