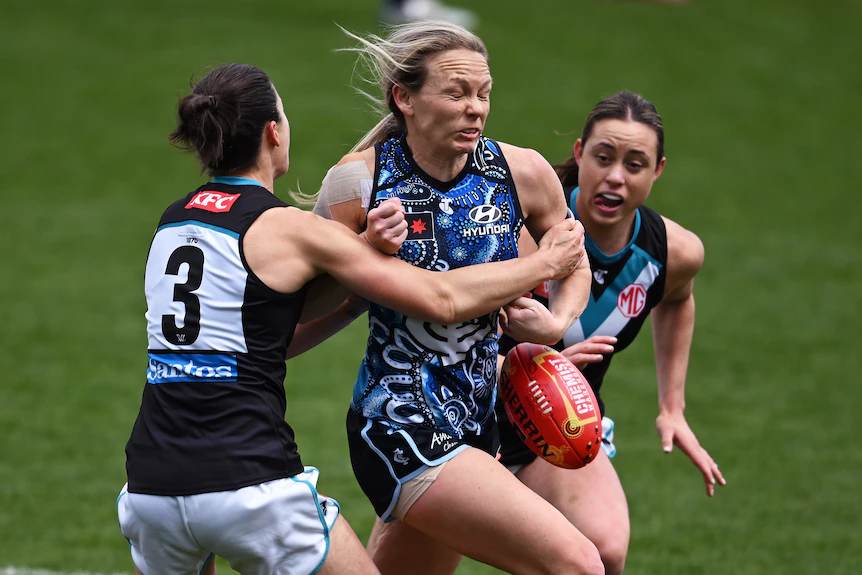 After the Blues held on to a one-point victory over the Bombers last week, they were challenged by the Power today and were unable to go back to back.

The Power were leading by 13 points at halftime to claim their first AFLW win over the Blues; it came down to a shot after the siren for the result to be decided.

The crowd was electric in the dying minutes of the game as both teams finished the game at Ikon Park on 4.3 (27), a piece in what arguably has been the game of the year.

Despite the draw for Port Adelaide as a first-year side into the competition to yet have a win, they played well and almost got over the line.

It has to go without saying that Port Adelaide's ball movement, especially in the second quarter, was incredible to watch. There were multiple scores conceived based on the Power working from defence to forward, which was exciting to watch.

Port Adelaide is still a young side in the competition, with debutants Yasmin Duursma killing it, looking so natural in just her first match, whilst Jade Halfpenny looked promising.

Abbie McKay was superb, collecting 26 touches to her name and three tackles which was an enormous effort. Kerryn Peterson, too was dominant with 21 disposals and a goal.

Apart from Peterson's goal from her terrific performance, Jessica Dal Pos, Breann Moody, and Elise O'Dea celebrated their 50th game milestone by kicking a goal each.

Hannah Ewings was amongst the best for the Power adding 21 disposals and four tackles to her name. Midfielders Abbey Dowrick and Ange Foley had 14 a piece, followed by captain Erin Phillips who had 13 touches.

Jade De Melo kicked a game-high of two goals, while Olivia Levicki and Maria Moloney also kicked one goal each.

The draw had not only been Port Adelaide's first game points won but also Carlton's first draw since joining the AFLW in the inaugural season.

Despite the Power's loss to the Blues, the team is adjusting to playing together and progressing to being competitive against other sides.

Although they should have capitalised on their errors, the Blues fought back hard and almost got over the line.

Just like the Blues, the Power come up against the Swans next week in Adelaide, which is a very winnable game for them, with neither side yet to have a win.