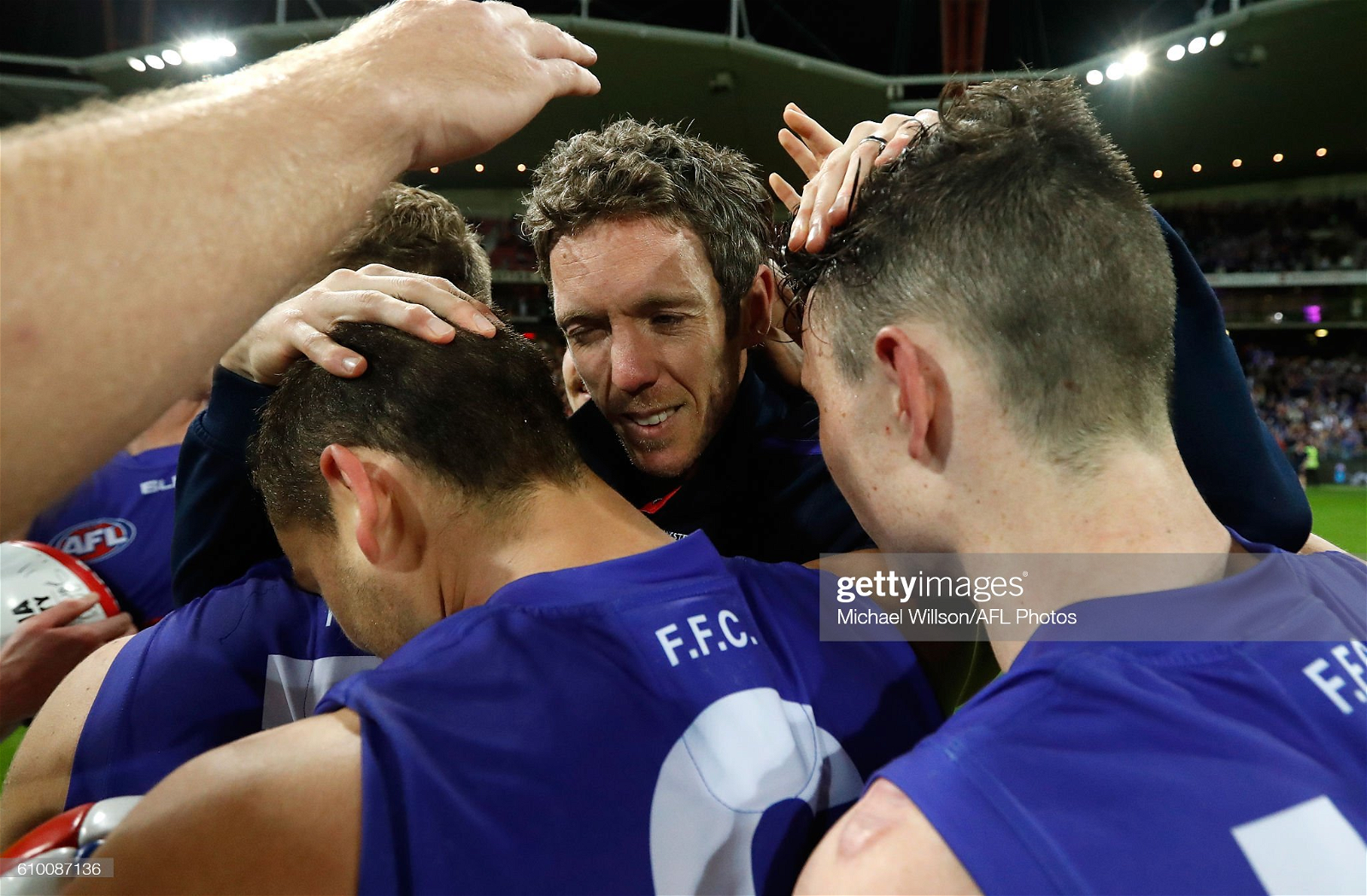 The top five AFL Preliminary Finals of the 21st century

We are now getting to the pointy end of the 2022 AFL finals, so it's time to look back at some of the best preliminary finals of the past.

The top five AFL Preliminary Finals of the 21st century

We are now getting to the pointy end of the 2022 AFL finals, so it's time to look back at some of the best preliminary finals of the past.

While the Hawks couldn't quite get the Premiership Cup in 2012, there is no doubt it was the start of a four-year period of domination at the top of the table, with much of their young list that won in 2008 finally maturing and becoming one of the best teams we have ever seen.

It was the battle of the big key forwards, with the Crows having Taylor Walker and Kurt Tippett combining for eight goals while Lance Franklin kicked three of his own in his second-to-last season for the Hawks.

Hawthorn went in as very heavy favourites at home, but seemed slightly complacent in the first quarter, with Adelaide taking a seven-point lead into the quarter-time break. Off the back of Lance Franklin, the Hawks came back into the game in the third quarter, outscoring the Crows by 21 points, taking a solid 16-point lead into the final break.

In the fourth quarter, Jason Porplyzia kicked a perfect goal after Hawthorn gave away a free kick to put his side within a goal. Graham Johncock then came in as the substitute to boot a goal , with the Crows then taking a narrow one-point lead with only a few minutes to go.

In typical style, Cyril Rioli was the man to set up Lance Franklin at the end - only after kicking a goal of his own which essentially iced the game. The fight shown by the Crows was typical of their outfit, while the Hawks would go on to lose a week later to the Swans at the very same ground.

The battle between West Coast and Sydney continued in 2006, with the former side managing to run over Adelaide away from home, in the dying minutes of this match. Over 50,000 people were in attendance for a game that saw Chris Judd and Ben Cousins immortalise themselves in Eagles folklore.

Going into the match, the Eagles had beaten the Crows in six of their last seven games, including the same fixture just 12 months earlier. Adelaide got off to a fast start taking a 17-point lead into the quarter-time huddle after keeping West Coast goalless in the first term.

The lead continued to grow throughout the second quarter. However, there was a significant incident just 13 minutes into that second quarter. Adelaide ruck Rhett Biglands injured his left knee, tripping over a teammate. The injury allowed Dean Cox, and West Coast in general, to take control of the centre of the ground.

In the match's second half, Judd and Cousins broke free of their taggers. Consistent scoring was the key for the Eagles as they began to bring the lead back. Their issue though, was inaccurate kicking; they had 30 scoring shots compared to the 20 scoring shots for the Crows.

The lead went to the Eagles seven minutes into the final quarter when Quinton Lynch kicked a goal, with the Eagles midfield able to run out the game while the Crows midfield was thoroughly cooked.

With only seconds left on the clock, Simon Goodwin was about to find a man inside 50 with a pin-point pass, but the whistle blew, and a free kick after the siren gave the Eagles the win before going on to win the premiership a week later.

With Hawthorn having played in what seems like every preliminary final over the last decade, it is no surprise the club again make an appearance on this list. This was not just one of the best finals, but one of the best matches of all time.

In front of more than 85,000 people at the MCG, the Hawks went into this match as heavy favourites over their arch-rivals in Cats. Current Hawks coach Sam Mitchell put on a clinic having 38 touches, while Steve Johnson was the best for the Cats with 32 disposals and four goals.

The match was even stevens through the first two quarters, with Hawthorn taking a four-point lead into the main break. That was before Geelong decided to put on the after-burners and kick seven goals in the premiership quarter.

It was the Hawks' turn to come back in the final quarter, and while their goalkicking was inaccurate, their domination in 16 marks to six in the last quarter put them on track for the win.

It was a Shaun Burgoyne snap in time on that put the Hawks over the line before they went on to defeat the Dockers in the Grand Final a week later.

It's a game that lives long in the minds of both Port Adelaide and St Kilda fans, albeit for very different reasons. After a few years floating around the top of the ladder, Port Adelaide was finally able to get it together and get past St Kilda before going on to stop the Brisbane four-peat.

Roger James was the best for the Power kicking a goal and having 28 disposals. For the Saints, it was Lenny Hayes with 32 disposals and nine tackles that dominated the Crows' midfield during the night.

Fraser Gehrig booted two goals early to become the 27th man to kick 100 goals in a season. While a great achievement, it was to St Kilda's detriment with the field invasion edging the momentum the team were using throughout the first quarter.

Those early goals gave the Saints a five-point lead at quarter time before the Power were able to come back and take a small four-point lead into the main break. The lead continued to change hands multiple times through the match, with the lead never moving past two goals.

Port Adelaide broke away in the final quarter, taking an 11-point lead before a couple of goals from St Kilda equalled things up with limited time remaining. Port Adelaide's Michael Wilson took two great marks before Gavin Wanganeen snapped a miracle goal to give his side a six-point lead with only minutes left on the clock.

With less than 60 seconds to go, Brent Guerra seemed as if he would walk into an open goal with the ball at his feet. But it was Shaun Burgoyne once again standing up in finals to lunge and stop the goal before the siren sounded. Port Adelaide would go on to win the Grand Final a week later while St Kilda are still waiting to break its 52-year curse.

It was the fairytale match of a fairytale finals series for the Bulldogs as they continued to play on the road for the third week in a row, beating the Giants before clinching the Premiership. It was also a match that really put the Giants on the map for many from outside of the Sydney bubble.

There was plenty of emotion in this match with the Giants coach Leon Cameron, and captain and former Bulldogs skipper Ryan Griffen all at the Giants rather than their spiritual homes out in Melbourne's west. Thousands went up the Hume Highway in red, white and blue and booked dozens of flights to get to Sydney.

Just four goals were kicked in the first quarter, with the Bulldogs taking a two-point lead into the break before extending that out to nine points at the main break. The Giants must have enjoyed their halftime oranges, as they came out fast and tough, grabbing a one-point lead going into the final term.

The Giants took the early lead in the final quarter thanks to goals from the big Rory Lobb and the small Toby Greene. The 14-point lead was the largest of the match and it looked like the Bulldogs' run was coming to an end.

With four minutes to go, the scores were level at 82 apiece, and the next team to kick a goal was essentially going to the Grand Final. Tom Liberatore found Jack Macrae just 20m in front of goal, and Macrae made no mistake kicking his first goal since Round 1.

The Bulldogs then managed to scrap their way through the last few minutes, holding onto the ball and sending themselves to the decider. The Giants, of course, are still waiting to get their hands on the trophy for the first time.