The first of two tribute concerts held in honour of Foo Fighters drummer Taylor Hawkins was performed at the iconic Wembley Stadium, and the highlights were endless. These were our favourite moments. 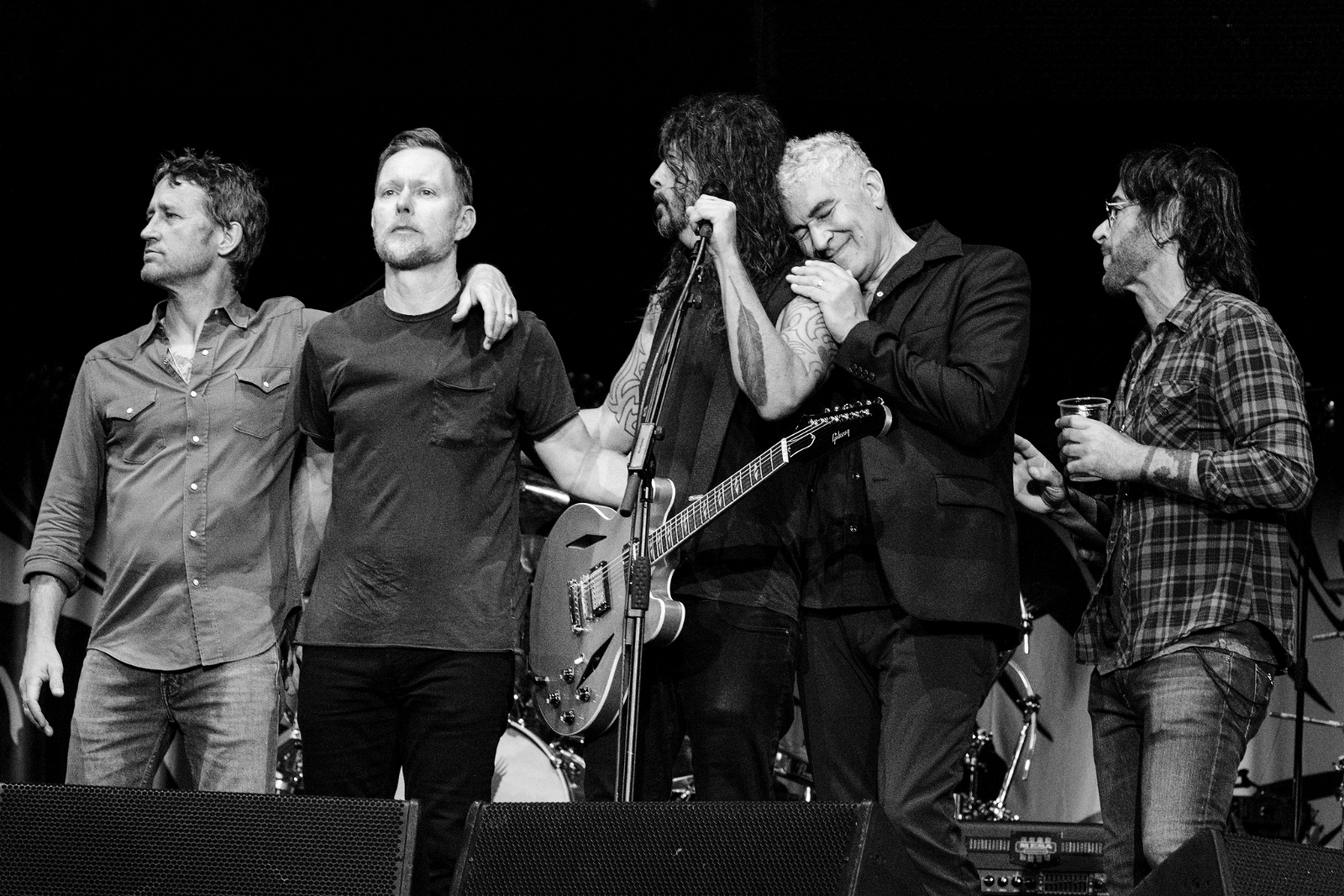 In Dave Grohl's book The Storyteller: Tales of Life and Music, the Foo Fighters vocalist and guitarist tells a story called 'Entering Valhalla' about attending a tribute concert for George Harrison.

The concert was organised by Harrison's son Dhani and transformed Royal Albert Hall into a temple a year after the musician's passing.

"It was clear this night was more than a concert. This was a spiritual experience," Grohl wrote.

The concert was packed with iconic musicians, and Grohl highlights the moment Harrison's bandmate Starr came on stage to perform Photograph.

"Here was a man, generously withholding his own grief of losing a dear friend and bandmate, spreading love and joy by sharing the most healing force in time of mourning: Music," Grohl wrote.

"I realised that I had been trying to do the exact same thing since that cold, cloudy morning of April 5, 1994. The day that Kurt Cobain died."

And tragically, but also beautifully, Grohl did it all over again on Saturday night, September 3.

Grohl put on much of a similar event to young Harrison's in honour of another bandmate, Taylor Hawkins, who died on March 5 this year.

The four-hour concert at Wembley Stadium featured members of Metallica, AC/DC, and Queen, and Grohl's daughter Violet gave attendees and Livestream viewers goosebumps during her performance.

But it was Foo Fighters' 1.5-hour set that shone the brightest and was packed with the most emotion.

In no particular order, here are what we thought the best moments of their set were.

Dave Grohl lets emotions flow in Times Like These

Opening the set and playing the first song without the man who meant so much to the band was always going to be a tough ask, and it was made even tougher by the fact the first song was Times Like These.

Grohl once described the song being about "scared but hopeful", and about "hope and love and compassion".

He wrote it when the band was on a hiatus in 2002 and he was missing his bandmates; little did he know the yearning he would have to endure two decades later, when he would begin missing one of them for the rest of his life.

This pain was evident as he tried to tackle a stripped-back, slowed-down beginning of the song, and got choked up.

He paused as he knew the next line he had to sing was so poignant that it was overwhelming.

With his head bowed and tears spilling over, the crowd willed him forward.

Grohl first met young drumming prodigy Nandi Bushell in August 2021, after she challenged him to a drum-off and he accepted.

Bushell stopped by The Forum in Los Angeles at the Foo Fighters' show and took the stage to play Everlong with the band.

She and Hawkins developed a great bond, as she looked up to him.

One year and one week after that legendary drum-off, Bushell paid tribute to her special friend in the most fitting way.

She returned to the stage with the rest of the Foo Fighters and performed Learn to Fly, which is essentially what Hawkins had helped her do.

When Grohl attended the George Harrison tribute concert, he got the chance to meet Sir Paul McCartney for the first time - something he described as a "supernatural event".

"I would not be standing there that night, much less writing this today, if it weren't for this man," Grohl wrote in his book about the meeting.

It seemed only fitting that McCartney was there to take the stage at Hawkins' tribute concert.

In a history-making moment, McCartney performed The Beatles song Oh! Darling, and was joined by Chrissie Hynde for the occasion.

He said it was the first time he had played it live since it was recorded.

He also played Helter Skelter with the Foo Fighters afterwards.

If you got through the concert up to this point without shedding a tear, guaranteed that all changed when Hawkins' son Shane sat in his Dad's throne behind the drums.

Shane, who is 16 years old, joined his Dad's band to play My Hero, probably the most fitting song in the band's discography he could have performed.

It was clear that he had the same affinity for the drums that his Dad did; he had the same facial expressions, the same little tricks, and the same flailing blonde locks - albeit a bit shorter - that Hawkins senior did while sitting behind the kit.

His passion, talent, and love shone through brighter than the thousands of phone screens lit up while recording arguably the most special moment of the concert.

There are no words to describe it, so I will end this article with the full performance for you to revel in.