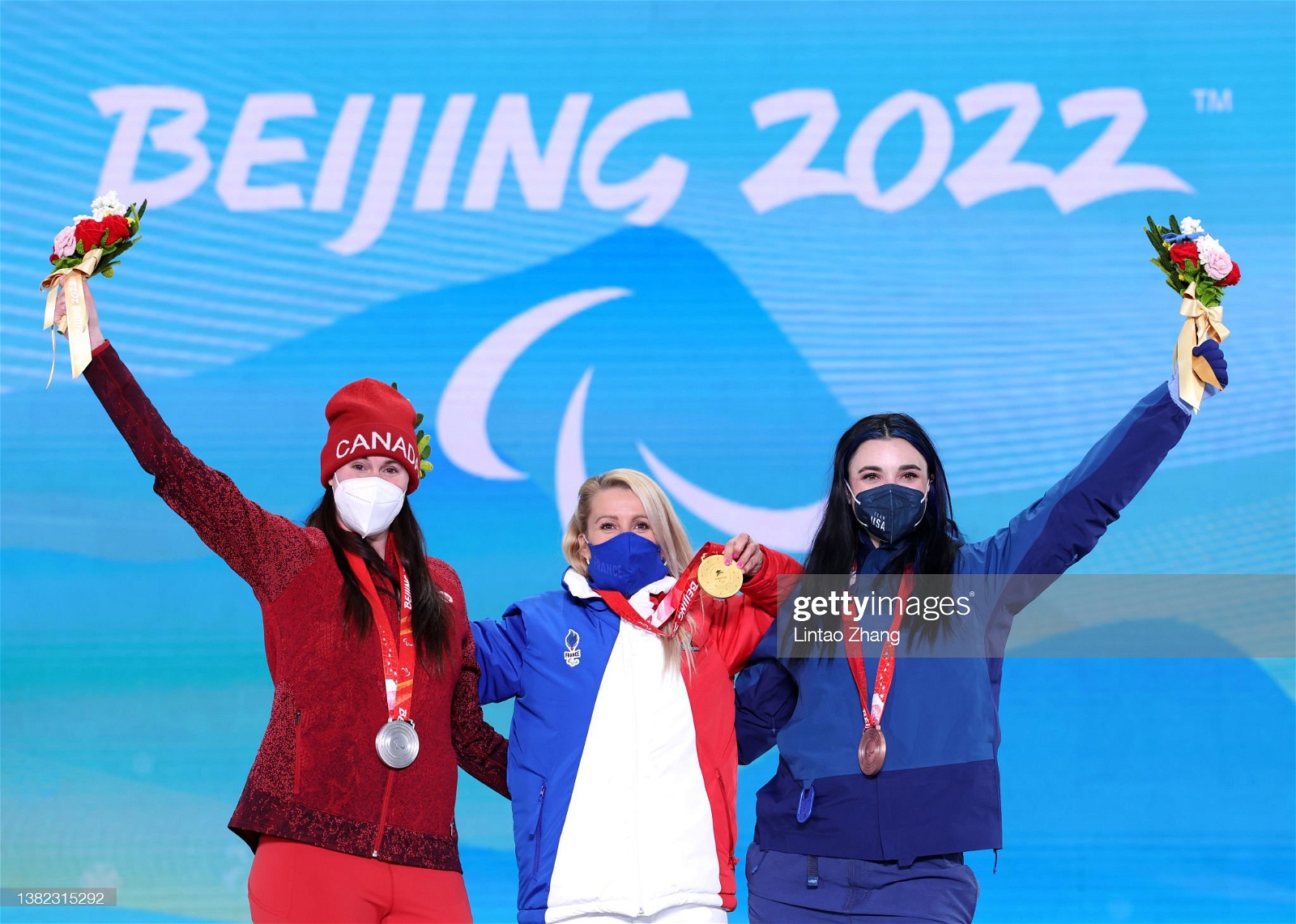 In the men's Super-Combined familiar faces took control with Italy's Giacomo Bertagnolli winning the country's first gold medal of Beijing 2022 and the third gold of his career in the visually impaired classification.

Bertagnolli was in third after the Super-G and the technical specialist hit the Slalom course with unimpeachable skill completing the course two seconds faster than anyone else. Johannes Aigner of Austria completed the medal set winning silver, finishing second in both sections.

While Neil Simpson won his second medal of the games with an imperfect Slalom section but was advantaged by those placing higher than him in the Super-G not finishing the Slalom.

Australian Patrick Jensen put up a great Super-G time to sit in seventh after the first section, however, crashed in the slalom earning his first DNF of the Games.

In the standing event France's Arthur Bauchet won gold, beating the rest of the field by nearly five seconds with Santeri Kiiveri finishing in second.

However, the miracle came from the bronze medallist after New Zealand's Adam Hall came back from 15th in the Super-G to win bronze putting up the second-best time on the Slalom course for the event.

Mitchell Gourley was back on course for Australia finishing in 13th overall, with an awkward section of his Slalom almost causing him to come unstuck but he recovered and managed to cross the line comfortably.

Jesper Pedersen won his second gold and third medal of the games in the sitting classification, however, was joined by the new faces of Dutch duo Jeroen Kampschreur and Niels de Langen winning silver and bronze respectively.

Another day another podium for Zhang Mengqiu

The women's Super-Combined competition was filled with drama as athletes that excelled in the Super-G section struggled through the Slalom section.

In the women's standing event 2018 Super Combined gold medalist Mollie Jepsen put up a decent time in the Super-G section to sit in fifth however fell at the starting line with her ski getting caught on the rubber mat as she pushed off. 2014 gold medalist Marie Bochet also struggled, crashing early in the course.

However, it wasn't all doom and gloom with Sweden's Ebba Årsjö winning her first Paralympic gold medal after winning bronze in the Super-G on day two.

China's Zhang Mengqiu made her third consecutive podium of the Games however gold still eludes her having won two silver and a bronze, while Canadian Alana Ramsay claimed bronze.

In the visually impaired classification, Henrieta Farkašová was back on top winning her second gold medal of the games, however, her Slovakian teammate Alexandra Rexová had an incredible start in the slalom ultimately did not finish after crashing at the end of the vertical section.

Zhu Daqing won her second medal of the games finishing in second, putting in a strong performance to lead after the Super-G section but was too slow in the Slalom putting her behind Farkašová by 0.86 seconds.

Menna Fitzpatrick rounded out the podium putting up the best slalom time of the day to come back from fifth to claim bronze to win her second medal of the games.

Finally, in the sitting event, it was once again the battle between Momoka Muraoka and Anna-Lena Forster with Forster claiming her second consecutive Paralympic gold medal in the Super-Combined coming back from sixth in the Super-G section to win after a near-perfect Slalom.

Momoka Muraoka was just too slow in the Slalom section but had created a comfortable buffer between herself and the rest of the competition to win silver, while Liu Sitong completed the podium winning her second bronze medal of the games.

For those that don't closely follow the Snowboard Cross or the Paralympics this wouldn't have been a story they would have heard of but women's LL2 Snowboard Cross gold and bronze medallists Cécile Hernandez of France and Breanna Huckaby from the United States wouldn't have competed at Beijing 2022 if it were up to the IPC.

After their classification was removed from the Paralympic programme due to a lack of athletes, they were then rejected to compete at this year's games due to being considered 'too disabled' to be competitive. The pair united and fought the IPCs decision in court and were permitted to compete in a discipline where they were at a disadvantage.

That wasn't going to stop the pair who made it through the quarter-finals and semis to reach the big final, guaranteeing at least one of them a podium.

Hernandez hit the front early in the final and didn't look back despite, Canada's Lisa DeJong hot on her heels. Huckaby didn't have the cleanest of races, barely making it into the big final after coming back from a crash in her semi to finish in second, the American had a clash with Dutch Snowboarder Lisa Bunschoten.

Bunschoten wiped out and was quickly ruled as a DNF but when Hernandez reached the bottom of the course she had an anxious wait to see whether the judges would rule her at fault for intentionally causing the crash.

Had she been disqualified, small final winner Brittani Coury would have won bronze due to Bunschoten's DNF, however, the judges saw no intent and allowed the finishing results to stand.

In the men's LL1 it was Canada's Tyler Turner that was the top dog, confidently claiming gold after several close races in the quarter and semi-finals.

Mike Schultz of the United States took out silver, while Wu Zhongwei claimed bronze for the host nation but that wasn't the biggest event in the Snowboard Cross for the Chinese.

Heading into the big final of the Men's UL classification China was guaranteed a podium sweep with four athletes qualifying for the final.

It's proof that investment into para-sport goes a long way with 19-year-old Ji Lijia winning gold in what was a battle largely between himself and silver medallist Wang Pengyao after Zhang Yiqi and Zhu Yonggang came into contact with each other early in the race.

Zhu was the first of the two to cross the finish line however, ultimately what mattered was that he did finish after Zhang was disqualified for intentional contact.

Three of the four podiums in the Cross Country Skiing events featured two athletes from the same country on day three.

The Women's 15km Freestyle in the vision impaired and standing classes kicked off with Ukraine's Oksana Shyshkova winning her second gold medal of the games. Shyshova with her guide Andriy Marchenko finished comfortably ahead of the competition completing the course in 51:09.1.

Germany secured two spots on the podium by way of Linn Kazmaier and guide Florian Baumann, and Leonie Maria Walter and her guide Pirmin Strecker winning silver and bronze respectively.

Astoundingly the podium was identical to that of the six-kilometre sprint Biathlon final showing the crossover between the two sports extends beyond Oksana Masters at the Paralympics.

In the women's standing event, Canada's Natalie Wilkie took out gold finishing with a time of 48:04.8, 55 seconds ahead of silver medallist Sydney Peterson of the United States and was joined on the podium by fellow countrywoman Brittany Hudak.

In the Men's 20km visually impaired event Canada's Brian McKeever produced one of the most dominant win of the Games so far, finishing 3:17.7 minutes ahead of silver medallist Jake Adicoff of the United States.

However, Adicoff didn't have much competition for silver, finishing an additional 1:11.0 minutes ahead of bronze medallist Zebastian Modin of Sweden.

Japan took out its first Cross Country Skiing gold of Beijing 2022 in the standing event by way of Taiki Kawayoke who finished with an impressive time of 52:52.8.

Chinese duo Cai Jiayun and Qiu Mingyang were well off Kawayoke's pace but were just two seconds apart to take out silver and bronze respectively.

There have been some big wins in the Wheelchair Curling at these Games but Great Britain set a new record taking out the largest win both by margin and total points scored in a Winter Paralympics competition, beating Switzerland 15-1 in a six end match.

the magic came from three spectacular ends, the first, the third and the sixth, all of which the Brits had the final stone of the end. The first end resulted in four points as did the sixth but the third end saw Great Britain score five points, the first team to score five from a single end at these games.

However, they weren't the only team to score five in an end on day three. China, looking to bounce back from the early losses got a much-needed win against South Korea winning 9-4, scoring five points off the sixth end with South Korea deciding to concede in the seventh end when the comeback became unattainable.

Canada's unbeaten run came to an end against Sweden losing 6-3, but not beating the United States 7-4. Latvia rocketed up to fourth on the ladder defeating Sweden 9-7 however lost 5-6 to Estonia.

The Estonians won their second match of the day against medal contenders Norway, 8-3, looking like they could throw their hats in the ring for finals contention if they notch a few more wins.