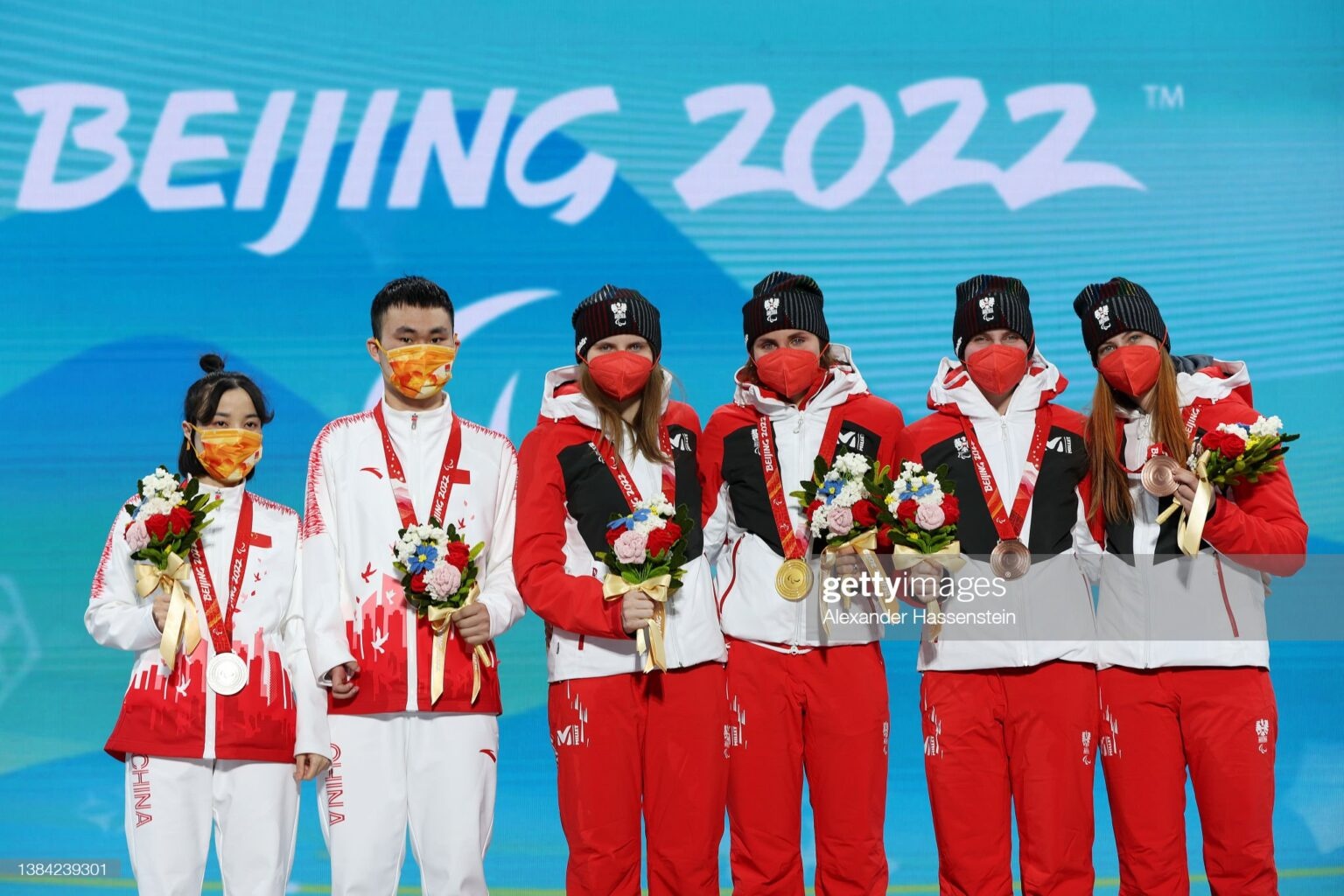 Day Seven of the Beijing 2022 Paralympics saw more joy for the Aigner family, and the return of Aussies to the action, in a gripping day.

Day Seven of the Beijing 2022 Paralympics saw more joy for the Aigner family, and the return of Aussies to the action, in a gripping day.

Aussies Melissa Perrine, Rae Anderson and Ben Tudhope were all in action for a stacked day of action at Beijing 2022 on Day Seven of the Winter Paralympics.

After waiting for much of the week for her first taste of action, Melissa Perrine, along with guide Bobbi Kelly made a splash in the Women's Giant Slalom in the visually impaired classification. Perrine and Kelly performed admirably, finishing six in both runs, just a couple of seconds off the pace, with runs of 1:02.13 and 1:04.88.

Her performance and consistency sealed sixth place for Perrine, It was not quite the heroics of Pyeongchang 2018, where Perrine won bronze, but it was a success in the difficult conditions.

Veronika Aigner took the gold medal in the classification, guided by her sister Elisabeth. As the duo stood at the top of the podium, a day after brother Johannes did the same. This time, the sisterly duo were joined by younger sister and Johannes' twin Barbara, who took home the bronze medal.

Zhu Daqing was the lone athlete separating the sisters, as the Chinese star took silver, continuing her successful Games.

Australia was also represented in the standing classification, as Rae Anderson took to the slopes as well. Anderson finished tenth, after finishing the first run in eleventh place, with a time of 1:06.50.

Her cumulative time was just over 22 seconds slower than Zhang Mengqui, who took home the gold medal for China. Mollie Jepsen of Canada finished second and Andrea Rothfuss of Germany took home the bronze medal.

Momoka Muraoka of Japan was the fastest finisher in the sitting classification to take gold, ahead of the Chinese duo of Liu Sitong and Zhang Wenjing.

Ben Tudhope returned to the action today in the Men's Banked Slalom, after his bronze medal in the Snowboard Cross, his favoured event, earlier in the week.

However, at the end of his runs, it wasn't enough to repeat the heroics of earlier in the week. His time of 1:11.64 was only good enough for ninth in the LL2 classification.

In the close standings, he was less than two seconds behind Qi Sun (China) who was the eventual winner, taking home gold in a time of 1:09.73. Matti Suur-Hamari of Finland continued his strong Paralympic performance with a silver medal, while Ollie Hill of Great Britain took home the bronze medal.

In the LL1 classification, it was also a gold medal for China, as Wu Zhongwei was the fastest finisher. He was ahead of Dutchman Chris Vos and Canadian Tyler Turner, who took home the minor medals.

In the UL classification, it was a different story, as China didn't take the gold medal. Chinese athletes were five of the fastest seven athletes, but the gold medal escaped them nonetheless. Maxime Montaggioni of France secured gold, with Ji Liya in silver and Zhu Yonggang in bronze.

In the Women's LL2, it was a similar story, with Chinese dominance except for the gold medal. That went to Brenna Huckaby, who has been one of the stories of the Games. Huckaby had fought to compete at the Paralympics in the first place, and the gold medal is vindication of her resilience on and off the snow.

Geng Yanhong and Li Tiantian were the fastest Chinese finishers, and in doing so, won themselves a silver and bronze medal respectively.

For many of the athletes who stood on the podium today in the Men's and Women's Individual 12.5km Biathlon, it wasn't a new experience this Games.

In the Men's Visually-Impaired, on the third attempt, Oleksandr Kazik finally beat countryman Vitaliy Lukyanenko, as the Ukrainians took gold and silver for a third time this Paralympics in the biathlon. Yu Shang, who joined them on the podium was one of just two athletes who didn't have a Beijing 2022 medal leading into the day.

In the Women's Visually-Impaired, it was a repeat of the short distance biathlon, as Ukrainian Oksana Shyshkova took gold ahead of German pairing Linn Kazmaier and Leonie Maria Walter. Shyshkova and Walter have now both medalled in all three biathlons at this Paralympics.

In the Men's Sitting, Liu Mengtao (China) maintained his form from the 10km event, as he hung on to win gold by just 15 seconds over Taras Rad (Ukraine). Liu Zixu took bronze, in a role reversal of the shortest event.

Oksana Masters further cemented her legacy, with another gold medal in the Women's Sitting. Masters beat countrywoman Kendall Gretsch (USA), who was forced into the silver medal position by a dominant Masters, who won by over a minute. Gretsch was a quarter of a minute faster than Shan Yilin (China), who took the bronze.

The trio were all together in the short biathlon earlier in the week too.

In the Women's Standing, Liudmyia Llashenko (Ukraine) finally broke through for her first gold medal, to complete her set from this Paralympics after winning bronze and silver in the shorter events earlier in the week.

Behind her was Zhao Zhujing of China, and in bronze was Brittany Hudak, who also took bronze in a cross country skiing event earlier in the week, as she broke through for a biathlon medal.

Benjamin Daviet (France) upset the field in the Men's Standing, as he beat Mark Arendz (Canada) and Grygorii Vovchynskyi (Ukraine). Daviet was the other athlete who was breaking through for his first medal in the ceremonies today.

Canada and USA to face off in Ice Hockey final

Canada turned in one of the most dominant performances of the Paralympics in the semi-final of the ice hockey against South Korea. The Canadians opened the scoring after just under 10 minutes in the match, and from there, the floodgates opened.

Three goals in the first period, and then four more in each of the second and third meant that Canada finished with an intimidating 11-0 victory to book a spot in the gold medal game.

The USA faced off against China for a chance to face Canada for the gold medal.

The American team jumped out to a flier, with four goals in the opening period, and they never looked back from there.

in the end, the North American teams will challenge for the gold medal match, while China and South Korea will fight for bronze.

China and Sweden book spots in the Wheelchair Curling final

After an even start in the first semi-final between China and Canada, China pulled away with consecutive three score ends with the hammer, and then a double score end against the hammer. The dominance set them up to run away with the match.

The Canadians conceded before the final end, with the score sitting at 9-5 and will face off against Slovakia in the bronze medal match.

Slovakia came up against Sweden in its semi-final. Sweden didn't have any particularly prolific ends, but did the little things right.

Sweden scored a single point in six of eight ends, while Slovakia put together a triple score, but otherwise failed to find a rhythm. In the end, Sweden holding its nerve was enough to book a place in the final.