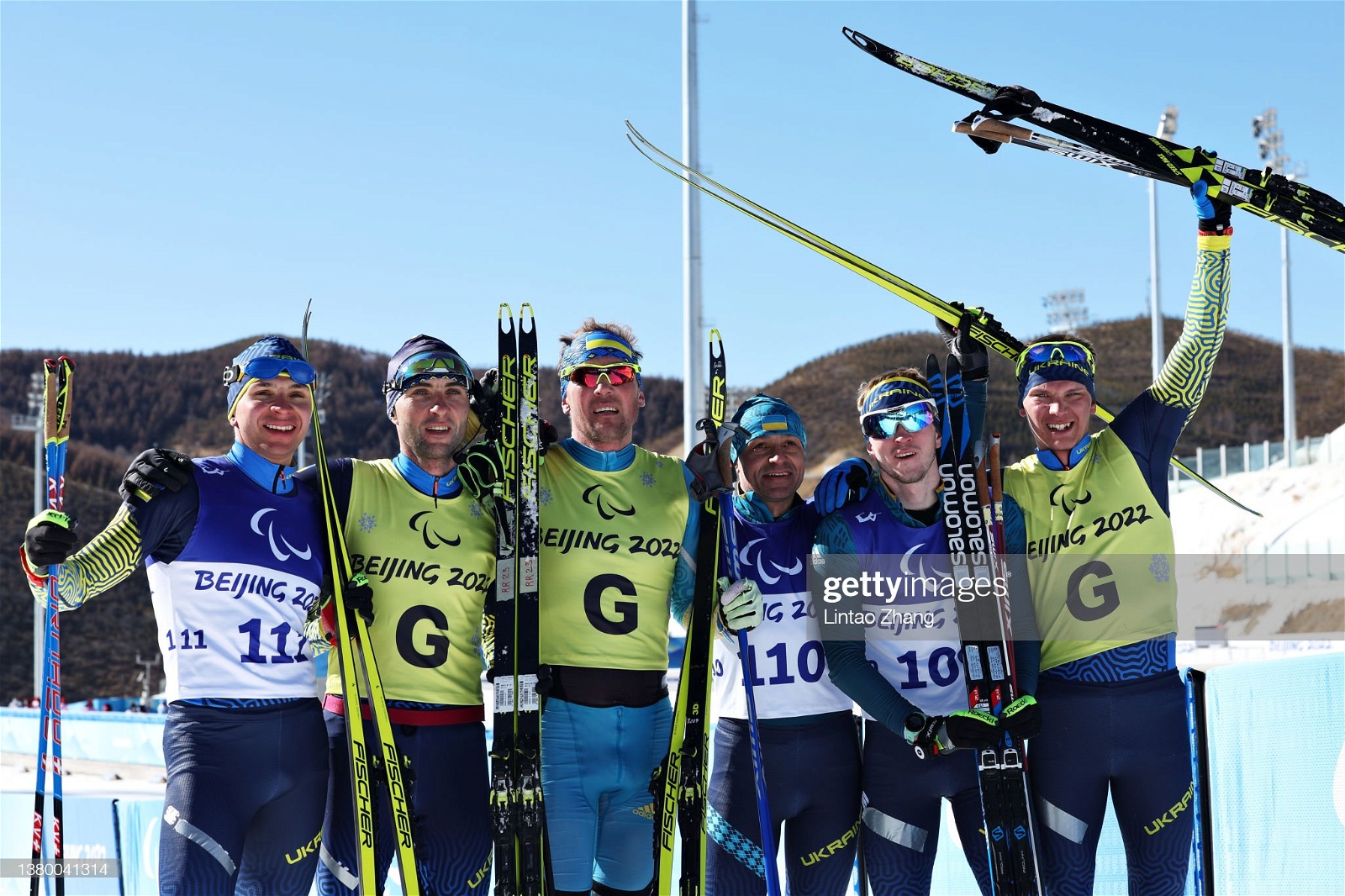 Beijing 2022 Paralympics Day One: Ukraine claims the first podium sweep of the games

alia saw no medal success on day one of the Beijing 2022 Winter Paralympics, but neighbours New Zealand secured gold in the men's sitting downhill event, while the USA dominated Canada in the Para-Ice Hockey.

Beijing 2022 Paralympics Day One: Ukraine claims the first podium sweep of the games

alia saw no medal success on day one of the Beijing 2022 Winter Paralympics, but neighbours New Zealand secured gold in the men's sitting downhill event, while the USA dominated Canada in the Para-Ice Hockey.

Australia saw no medal success on day one of the Beijing 2022 Winter Paralympics, but neighbours New Zealand secured gold in the men's sitting downhill event, while the USA dominated Canada in the Para-Ice Hockey.

Corey Peters is finally king of the downhill

There were three men's Alpine Skiing events on day one with the seated, vision impaired and standing downhill events all having gold medals awarded.

Australia had athletes in each event with Sam Tait, Mitchell Gourley and Patrick Johnson - with guide Amelia Hodgson competing in the seated, standing and vision impaired classifications respectively.

Tait had the best performance finishing in eighth with a time of 1:23.71, enjoying his time on the course with the chatter between himself and Hodgson featuring a number of cheers alongside the advice from the guide.

However, he was over 10 seconds behind the gold medalist Johannes Aigner of Austria who took command of the course finishing in 1:13.45 with Canada's Mac Marcoux and France's Hyacinthe Deleplace rounding out the podium, both less than a second behind Aigner.

Gourley didn't have the smoothest ride down the course finishing in 20th amongst a packed field that only featured one DNF, finishing in a time of 1:22.21. It's Gourley's first of five events at his final Paralympics and he'll be hoping to bounce back in time for the slalom and giant slalom events where he is more of a medal contender than the downhill.

Lastly was Sam Tait in the sitting downhill event, Tait overcame a shaky start but ultimately did not finish crashing and missing a gate, but he was quick to get up and make his way down to the mid part of the course to allow for the next athlete to start.

It was New Zealand's Core Peters that was the star in the men's Alpine Skiing on day one, finally completing his set of Paralympic medals after winning silver and bronze in Sochi and Pyeongchang respectively.

It was a stellar run with Peters beating the best times from training by over two seconds and beating silver medallist Norway's Jesper Pedersen by over a second, finishing in 1:16.73. Japan's Taiki Morii rounded out the podium finishing in 1:18.17.

Henrieta Farkašová's quest to sweep the vision-impaired Alpine skiing gold medals got off to a roaring start when she claimed gold in the downhill event, besting China's Daqing Zhu and Great Britain's Millie Knight but 2.25 seconds finishing in 1:19.50.

Farkašová came close to sweeping the gold in 2018 but missed out on slalom gold, winning the silver, and she'll get the chance to win it later this week.

In the sitting event, Japan's Momoka Muraoka came out on top finishing in 1:29.77. It was a conservative run but was crucial with loose snow disrupting many athletes, resulting in the only finishers being the medal winners.

Germany's Anna-Lena Forster claimed silver while China secured another medal in the Alpine Skiing by way of Liu Sitong.

The Women's standing event featured the biggest upset on day one with two time Paralympic Champion, Marie Bochet crashing early in her run guaranteeing a new gold medallist in 2022. Canada's Mollie Jepsen seized the opportunity finishing in 1:21.75 to win her second-ever gold medal at a Paralympics.

China's Zhang Mengqiu looked like she might take gold leading at the last split ahead of the finish line but didn't have Jepsen's speed at the bottom of the course settling for silver 0.10 seconds behind the gold medallist. Sweden's Ebba Årsjö completed the podium finishing in 1.23.20.

Oksana Masters might just be the GOAT of Paralympic competition

The United States' Oksana Masters' sixth Paralympic campaign in 10 years picked up right where her journey in Tokyo left off winning gold in the women's six-kilometre biathlon event confidently crossing the finish line in 20:51.2.

China's Shan Yilin and the United States' Kendall Gretsch completed the podium with Gretsch finishing over a minute behind Masters.

Ukraine's Oksana Shyshkova claimed gold in the vision-impaired classification alongside guide Vitaliy Kazakov finishing in 20:09.0 and it was a double podium for Germany with Linn Kazmaier and Leonie Maria Walter claiming silver and bronze respectively alongside their respective guides Florian Baumann and Pirmin Strecker.

In the standing Biathlon 17-year-old sensation Guo Yujie claimed the host nation's first gold medal of the games finishing in 19:43.3, she was joined on the podium with fellow countrywoman Zhao Zhiqing who claimed bronze meanwhile Ukraine's Liudmyla Liashenko finished comfortably between the two Chinese athletes to win silver.

And the first podium sweep of the games goes to...

In the men's six-kilometre Biathlon event Ukraine shined claiming five of the nine medals on offer including sweeping the podium in the vision-impaired classification.

Vitaliy Lukyanenko was the man of the moment claiming gold alongside his guide Borys Babar finishing comfortably ahead of his teammates, in 17:05.8, Oleksandr Kazik and guide Serhii Kucheriavyi won silver just one and a half seconds ahead of Dmytro Suiarko and his guide Oleksandr Nikonovych.

The Ukrainians weren't done claiming gold, with Grygorii Vovchynskyi winning the standing event in 16:17.6 by far the fastest time on the course. Germany's Marco Maier won silver 10 seconds ahead of bronze medallist Mark Arendz of Canada.

Meanwhile, China claimed its second gold in the sitting classification by way of Liu Zixu who finished in 18:51.5. Ukraine's Taras Rad took out silver at his second games while China's Liu Mengtao rounded out the podium.

The battle between the two best Para-Ice Hockey teams in the world wasn't expected to be quite the bloodbath it was but the Canadians were lucky to get away with a 5-0 loss in the end with goals being disallowed and several shots on goal barely missing.

Korea by fortune of being scheduled to play the now disqualified RPC team had a bye for its first match and will play the United States tomorrow with a victory for the Koreans potentially securing them a place in the semi-finals.

In Group B the host nation crushed Slovakia winning 7-0 giving China the ideal start to its debut in the Para-Ice Hockey at the Paralympics.

Meanwhile, fourth-place finishers from 2018 Italy were bested by the Czech Republic, defeating them 5-0. The Czech Republic has been on the rise across the past two World Championships and could threaten for a medal if it finishes on top of Group B.

On the hunt to win back to back Wheelchair Curling gold medals, the host nation won't be pleased losing 7-3 to Canada conceding after seven ends with a triple on the fourth end putting the 2018 bronze medallists in the best position to win its first match.

Sweden had a dominant performance against Switzerland winning 9-2 only losing the fourth and seventh ends, with the Swiss conceding after the seventh end after not being able to score enough points off of the seventh end for it to be possible to send the match to extra ends.

Slovakia smashed the United States 9-3 only losing two ends, while Norway and Great Britain was the only match to go to eight ends in the first session with Norway claiming the 7-5 victory after Great Britain only scored a single on the final end.

Great Britain bounced back in the second session however beating the United States 10-6 closing the match with a double and a triple on the final two ends after what had looked like a close match.