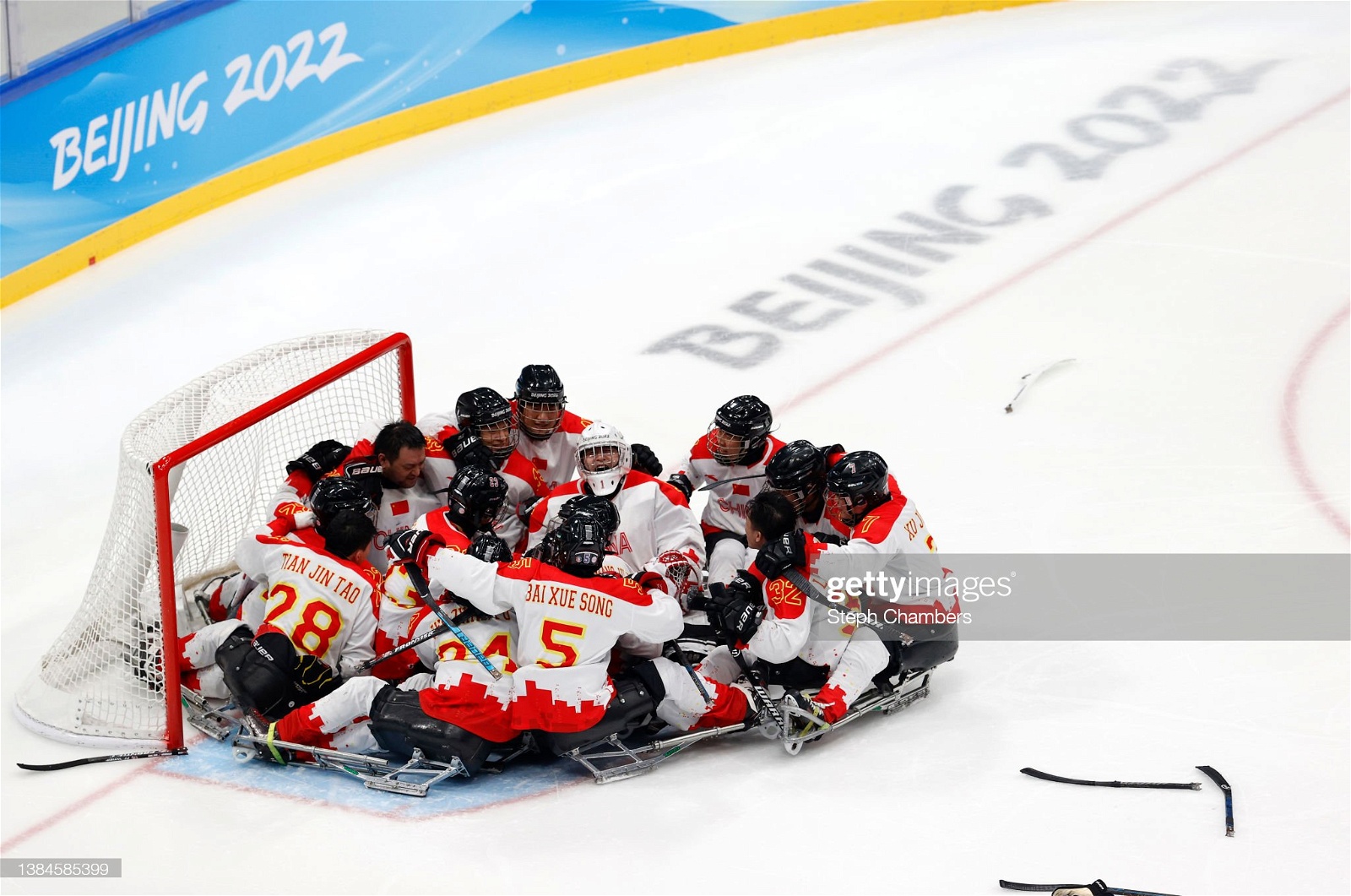 On the second last day of the Beijing 2022 Paralympics China secured medals in both Wheelchair Curling and Para-Ice Hockey, earning medals in all six sports at this year's games.

On the second last day of the Beijing 2022 Paralympics China secured medals in both Wheelchair Curling and Para-Ice Hockey, earning medals in all six sports at this year's games.

On the second last day of the Beijing 2022 Paralympics China secured medals in both Wheelchair Curling and Para-Ice Hockey, earning medals in all six sports at this year's games four years on from the host nation's first Gold at the 2018 Pyeongchang Paralympics.

The Aigner sisters sit on top of all teenage podium

After the heroics on the Alpine slopes on day seven hopes were high for the Austrian Aigner siblings on day eight hoping to see if Veronika and Barbara could podium again in the visually impaired classification on the technical slalom course.

18-year-old Veronika, guided by older sister Elisabeth carried over her dominance and had the best time in both runs, producing the best run on course of any classification in her first run with a 44.12, she had a combined time of 1:31.53 comfortably taking out her second gold of the same.

Younger sister Barbara cruised to a silver medal with a time of 1:33.24 over three seconds ahead of fellow 16-year-old and bronze medallist Alexandra Rexova. The Slovakian finished with a time of 1:36.31 protected by her superb first run after a slower second.

The slalom is the lone event China's Zhu Daqing has missed the podium at this year's games, with the 32-year-old finishing in eighth after her first run but not finishing in her second.

Australia's Melissa Perrine had a solid first run finishing with a time of 50.96 to sit in 10th but unfortunately did not finish ending her 2022 Paralympics campaign with a best finish of sixth in the giant slalom event.

Anna-Lena Forster successfully defended a second gold medal for the games, confidently winning the sitting classification albeit it by a narrower margin than her 2018 gold. Forster won by over two seconds with a total time of 1:37.86.

The host nation took out silver and bronze with Zhang Wenjing and Liu Sitong winning the respective medals confirming Liu's fourth medal of the games and Zhang's third despite the host nation not winning gold in the women's Alpine sitting classification.

Sweden's Ebba Årsjö took out her second gold of the games finishing with a total time of 1:31.76. Zhang Megqiu joined her on the podium winning silver with a five-second time difference between the two. It's Zhang's fifth medal of the games having won two gold and three silver in Beijing.

Anna-Maria Rieder joined the pair on the podium with a total time of 1:40.50 earning her first podium at her second Paralympics, narrowly missing the podium in the super combined earlier this week with a fourth place finish.

Just the middle distance events remained in the Cross Country Skiing and China's Yang Hongqiong's dominance continued in the sitting event winning her third gold in the 7.5km sitting event.

Yang's third gold was her most convincing finishing with a time of 24:47.5, 37 seconds ahead of silver medalist Oksana Masters who like Yang won all three Cross Country Skiing silver medals, earning her sixth medal for the games, after claiming two gold and a silver in the Biathlon.

They were joined by a new face on the podium Ma Jing who has formerly represented China at the Summer Paralympics in the para-athletics in the T-54 classification, she finished almost a minute behind Masters with a time of 26:22.9.

Linn Kazmaier completed the medal set for Beijing 2022 in the visually impaired classification in the 10km event, coming home in a time of 41:40.8, 40 seconds ahead of China's Wang Yue. It was the first podium of the games in the classification that didn't feature Ukraine's Oksana Shyshkova with Austria's Carina Edlinger rounding out the podium.

In the men's events, Brian McKeever swept the gold in the visually impaired classification finishing comfortably ahead of the field with a time of 33:06.6. It's his 16th Paralympic gold medal and the 20th medal of his career, having not lost an individual event since earning silver in the 20km Classical Visually Impaired in 2006.

Sweden's Zebastian Modin returned to the podium for a third time with his best result of the games earning silver. While bronze medallistDmytro Suiarkowas on his third podium for the games, but in a different sport, after having claimed two bronze medals in the biathlon earlier in the games.

In the sitting event, it was once again China's day with Mao Zhongwu and Zheng Peng winning gold and silver respectively, earning Mao his first gold of the games after Zhang claimed gold in the earlier two events with Mao right behind him. Italy's Giuseppe Romele earned the country its first non-Alpine medal of the games winning bronze in 31:42.5.

The standing 12.5km event was the closest of the Cross Country Skiing events of the games with a mere 10.2 seconds separating gold and bronze. The host nation'sWang Chenyangwas the victor with a time of 33:07.8 besting France'sBenjamin Davietby 1.4 second.s They were joined on the podium byCai Jiayunwho earned his second medal of the games.

After never appearing in the para-ice hockey at the Paralympics China has come from the clouds to snatch bronze from fourth in the world South Korea 4-0.

The Chinese's incredible tournament has been thanked in large part by Shen Yifeng who has been one of the top performers at these games having a hand in all four of the host nation's goals in the bronze medal match.

Wang Zhidong scored the first goal four minutes into the match helped by an assist from Yifeng and Zhu Zhanfu.

A second goal came by way of Yifeng in the first minute of the second period but ill-disciplined play saw Yifeng sitting in the penalty box for six minutes and just as he came out of the penalty box two more Chinese players were sent in giving Korea a major advantage that they failed to capitalise on.

With two minutes to go the Koreans switched out their goalkeeper for an extra player on the ice but it came at a heavy cost with Li Hongguan scoring in an empty net at 43:15 and with 12 seconds to go Yifeng put a second in the back of the net.

It's a historic moment not just due to the host nation earning a medal on debut but because Yu Jing becomes the second female Para-Ice Hockey medallist after Norway's Britt Mjaasund Øyen won silver the first time Para-Ice Hockey was added to the Paralympic programme in 1994.

China had a shaky start with pressure on for the host nation to defend its first-ever Winter Paralympic gold medal in Beijing.

For the gold medal, the Chinese came up against Sweden who had beaten the hosts 5-1 on the opening day of competition.

But that was a memory long in the past with the hosts having rallied and won nine straight matches including several convincing wins.

The match got off to a quiet start with both countries blanking the first end before China secured a point on the second end. Sweden bounced back scoring on the next two ends before China brought the match out to a 5-2 lead on the fifth end scoring four points.

Sweden managed to score again on the sixth end but the match was over after the seventh with China scoring a triple to win 8-3.

It's Sweden's best finish in the Wheelchair Curling at the Paralympics and a major improvement from four years ago when the nation finished in 10th after a shocking round-robin stage.

Canada joins the two nations on the podium after winning bronze on Friday night ahead of Slovakia.