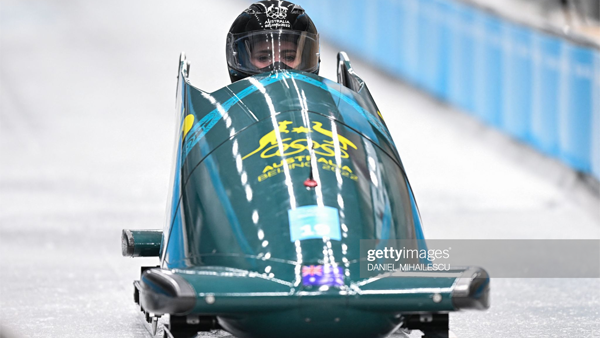 Bree Walker improved upon both of her runs in the Monobob heats, while the Netherlands broke an Olympic Record on the way to Women's 3000m Relay gold.

Bree Walker improved upon both of her runs in the Monobob heats, while the Netherlands broke an Olympic Record on the way to Women's 3000m Relay gold.

Bree Walker was the lone Australian out on the ice on Day Nine of Beijing 2022, competing in the Women's Monobob and improving in each of her two heats as she searches for a podium finish.

Elsewhere, also in the Women's Monobob, a new start record and track record were set while the Netherlands secured an Olympic Record on the way to Women's 3000m Short Track Speed Skating Relay gold.

The USA's Erin Jackson made a last-ditch effort to take gold in the Women's 500m Speed Skating, coming in at 0.10 seconds from an Olympic Record, completing a big jump and improvement on her PyeongChang 2018 result in the event.

The United States of America's Kaillie Humphries is well ahead of the field after the first two heats in the Women's Monobob, setting a track record with her first run, finishing with a time of 1:04.44. She maintained a good time of 1:04.66 in Heat 2 to sit comfortably in first place with a combined time of 2:09.10 - 1.04 seconds ahead of second-placed Christine de Bruin from Canada.

The USA's Elana Meyers Taylor also set a new start record during Heat 1, coming in at 5.61 seconds, sitting in equal third place after that first run, but now sitting fourth after the second heat of the day.

Australian Bree Walker improved upon her time from the first heat where she clocked 1:05.55 (ranking 10th), to finish Heat 2 ranked in sixth place with a time of 1:05.54, for a combined time of 2:11.09, at the moment, sitting seventh in the total standings. She remains just 0.77 seconds off the medal positions.

The Women's 3000m Relay final saw an Olympic Record broken by the gold medal team from the Netherlands, the team of Suzanne Schulting, Selma Poutsma, Xandra Velzeboer and Yara van Kerkhof finishing with a time of 4:03.409.

The silver medal in the Women's 3000m Relay went to Korea, with Seo Whimin, Choi Minjeong, Kim A Lang and Lee Yubin fighting hard, reaching the second position inside the final lap. China took the bronze medal with Qu Chunyu, Zhang Chutong, Fan Kexin and Zhang Yuting all contributing towards the result.

The Men's 500m Short Track Speed Skating also came to its conclusion on Day Nine with quarter-finals action inside Capital Indoor Stadium, with the top two from each quarter-final progressing to the semi-finals. Of the two semi-finals, the top two progressed to Final A.

In Final A, Hungary's Shaoang Liu took first place, and the gold medal, finishing in a time of 40.338 seconds, never wavering from a first-place ranking throughout the four laps of the track. It was Liu's first individual Olympic gold medal (after winning gold in the Men's 5000m Relay in 2018), and third gold medal of these Games after bronze in the Men's 1000m and Mixed Team Relay.

The final medals of Day Nine were decided in the Women's 500m, with Erin Jackson completing a huge jump from four years ago, to win gold in Beijing.

Part of the 14th pairing with Poland's Kaja Ziomek, Jackson raced away to a finishing time of 37.04 seconds - only 0.10 seconds from the Olympic Record. In her Olympic Games debut in Pyeongchang, Jackson completed the Women's 500m in 24th place, to now celebrating her maiden gold medal.

Having lead the field up until Jackson's run, Japan's Takagi Miho picked up the silver medal after he and his pairing both posted times that were under 38 seconds, with Miho edging her opponent, finishing with a time of 37.12 seconds.

After finishing seventh four years ago, the ROC's Angelina Golikova found the podium for the first time in her third Olympic Games campaign, finishing this race with a time of 37.21 seconds.

Session Six and Seven for the Men's Curling, and Session Six for the Women's Curling each happened on Day Nine of Beijing 2022, with Sweden's men's team and Switzerland's women's team each sitting on top of the round-robin standings with a 5-0 record.

Today, Sweden had a 6-4 win over Norway, coming back from a 3-4 deficit after eight ends, but finding one point in the ninth end, before an attempted double takeout from Norway's Steffen Nor Walstad was unsuccessful, handing Sweden two points for the victory.

Also in Session Six, Great Britain beat China 7-6, Canada blitzed the USA 10-5, and Italy won 10-7 over the ROC. In Session Seven, Great Britain won 8-2 against Demark after eight ends, Switzerland fell to Italy 8-4 after nine ends while China couldn't mount a comeback, going down 8-6 to the USA.

In the women's side of the draw, Switzerland had an 8-4 win over Canada to improve to a five-game win streak to begin its Beijing 2022 campaign. Switzerland jumped out to an early 3-1 lead after four ends before Canada tied it up, and would lead after six ends. However, Switzerland gained five points across the seventh to ninth ends, with Canada conceding defeat after that point.

In the remaining games of Session Six, Great Britain defeated Denmark 7-2, Sweden beat the USA 10-4, while China played and won a 6-5 thriller against Korea.

Group A and Group C of the Men's Ice Hockey Preliminary Round continued on Day Nine as the competition now looks towards the next round, that being the qualification playoffs

In Group C's games, Slovakia picked up its first win of the tournament with a 5-2 win over the winless Latvia. In the other match of Group C, Finland edged Sweden 4-3 as the game went to overtime with Sweden having a 3-0 lead after the second period, to which Finland tied the game in the third period before Harri Pesonen goaled and sealed the win for Finland.