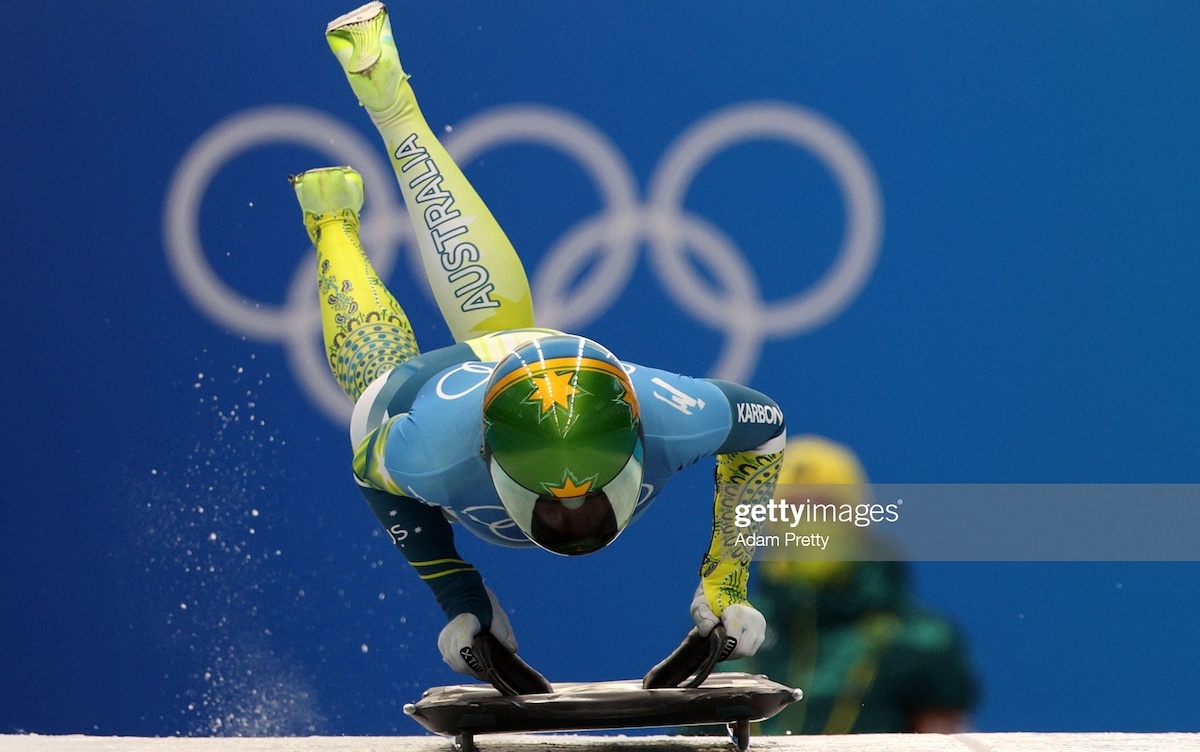 In an exciting Day 7 at Beijing 2022, Australian Jaclyn Narracott is in medal contention, leading the Women's Skeleton at the halfway mark.

In an exciting Day 7 at Beijing 2022, Australian Jaclyn Narracott is in medal contention, leading the Women's Skeleton at the halfway mark.

An Australian leads the Women's Skeleton, World Records were smashed at the skating rink, and there was plenty of other action on the ice on Day 7 at Beijing 2022.

Narrocott has a narrow lead at the halfway mark

Australian Jaclyn Narracott is hunting Australia's first medal in a sliding sport at the Winter Games, and at the halfway mark of the Women's Skeleton, she couldn't be in a better position.

Sitting in first position, 0.21 seconds ahead of German sliders Hannah Neise and Tina Hermann (+0.23), Narracott still has parts of her run that she can clean up to push out to an even greater lead.

Her first run was strong, but she was just slightly off the speed of Canadian Mirela Rahneva to be 0.02 behind heading into the next heat.

In her second run, Narracott led by as much as 0.43 seconds before losing some of her pace and advantage with a light touch on the wall at turns four and five.

An attacking approach out of the 12th turn kept her up at around a strong speed well over 110km/h, as she pushed through the last section to hold a margin of 0.21 with only one of the fastest sliders from the first heat remaining.

The third German Jacqueline Loelling is currently fifth, 0.38 behind Narracott, while at her home Olympics Chinese slider Dan Zhao sits in the middle in fourth.

Narracott and her fellow sliders will be back in action at night on Day 8, with the third and fourth runs to decide the medals from 11:20pm AEDT.

Monobob and Two-Woman Bobsleigh driver Breeana Walker has had a strong second day of training runs in the Women's Monobob.

Second competitor out of the starting gate, her first run was 1:04.69, the fastest time of the training heat, as she was in heat's one and two on Thursday.

The closest to her was one of the favourites German Laura Nolte, 0.2 seconds behind, while American Kaillie Humphries was third in the run, +0.32.

Later in the evening, it wasn't Walker's best session, but she was still in the 1:04s, just a touch slower at 1:04.81. The time had her in fifth for the training heat, behind German Mariama Jamanka (1:04.53), Humphries, Canadian Christine de Bruin and Nolte.

There are two more training runs tomorrow for Walker, before she gets into the official competition heats on Sunday and Monday.

Contenders continue to impress in Curling

It was all happening at the Curling rink on Day 7, as Men's and Women's round robin matches played out across three sessions.

Switzerland and the United States both picked up another win in the Women's Curling, to move to three wins from three matches and sit equal top of the standings.

Canada dropped its match to Japan, 8-5, to fall to 2-1 in the standings, while Great Britain was left two points short of Korea and is also 2-1 three games into the round robin competition.

In the Men's event, Sweden remains unbeaten at the top of the table with another convincing 9-3 win, this time over Italy.

China got its first win at the home Olympics rink with a 5-4 victory over Denmark, while Switzerland defeated ROC 6-3.

The United States got a win over Great Britain 9-7, to remain in a strong position for one of the semi-final places.

USA! USA! USA! through to semis

The United States took out the Czech Republic in the first of the Women's Ice Hockey knockout matches, outlasting the Czechs for a 4-1 victory.

While the scoreline appeared flattering, the flood gates only opened in the last period after the United States had found it tough to score.

Czech Republic hit the scoreboard first, Michaela Pejzlova finding the back of the net thanks to assists from Denisa Krizova and Tereza Vanisova.

The United States hit back less than a minute later, scoring through Hilary Knight to level the score at 1-1.

Three further goals to American's Lee Stecklein, Savannah Harmon and Kendall Coyne Schofield, in the third period, sealed their place in the semi-finals.

In the men's preliminary rounds, ROC defeated Denmark 2-0, while the Czech Republic took a win against Switzerland, 2-1.

While Sweden had a 3-0 advantage by the second period, things continued to heat up with Slovakia desperate to hit the scoreboard.

They did so, through teenager Juraj Slafkovsky, but it was unfortunately nothing more than a consolation goal, as the Swedes ran away with a 4-1 victory. The win puts Sweden in a strong position with two wins to start the preliminary rounds.

Corey's best not quite fast enough

After a personal best time of 41.097, he unfortunately did not make the automatic qualification cut in his heat and had a nervous wait through the following five heats to learn his fate.

The fourth, fifth and sixth heats were faster, and the third finishers in each of those progressed, along with Chinese Sun Long from Heat Seven after Dutch racer Jens van 'T Wout was penalised for taking him out.

Corey missed out on a spot in the quarter-finals by 0.079 of a second.

It was a speedy start on the ice at the Short Track Speed Skating, as Dutchwoman Suzanne Schulting set a new world record in first Women's 1000m quarter-final race of the night.

The time of 1:26.514 was a blistering start to the night on the track, setting the pace for her fellow racers.

Schulting had also shaved 1.479 seconds off the Olympic Record two days ago in the heats, before she beat it again tonight and took the World Record down with it.

In the Final, Schulting led from start to finish, and while she wasn't as fast as earlier in the night, she became an Olympic Champion with a time of 1:28.39.

She became the first woman since 1998 to win consecutive gold medals at the short track, after her win in the Pyeongchange 1000m four years ago.

It wouldn't be a short track final without one crash, Kristen Santos was in third place going into the final lap, but as Choi made her move, the American Santos went down and took Arianna Fontana (ITA) with her.

After taking Gold in the Men's 5000m Speed Skating on Sunday evening, Swede Nils van der Poel has added another gold medal to his collection, taking out the Men's 10000m on Friday night.

Shaving more than two seconds off his own World Record set almost a year ago to the day, van der Poel was skating in the fifth of six pairings and set a time that held on for victory.

The 12:30.74 was almost 13.85 seconds faster than any of his competitors, showing just how dominant he has been at the distance events this Olympics.

Patrick Roest of the Netherlands held on for Silver, as he did in the 5000m, while Davide Ghiotto - who raced in the same pair as van der Poel and had the Swede setting a strong pace - took home Bronze for Italy, 15.24 seconds behind the Olympic Champion.

Van der Poel emulated compatriot Tomas Gustafson who, in 1988, also did the Olympic distance double, and the Swede is the first to do so since Dutchman Jochum Uytdehaage in 2002.