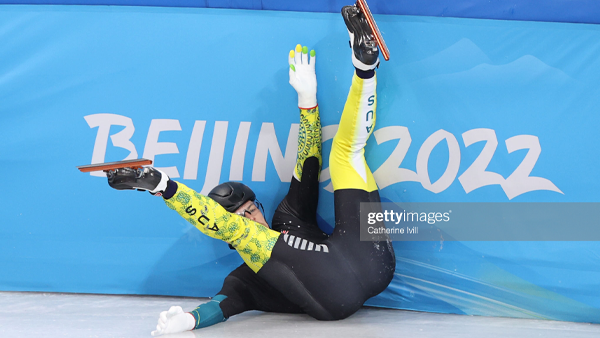 Beijing 2022 Day 3 On Ice: Corey crashes out as history is made across multiple sports

On the ice, history was made in both the figure skating, speed skating and ice hockey on Day Three of Beijing 2022, while Australia's Brendan Corey suffered heartbreak in the short track speed skating.

Beijing 2022 Day 3 On Ice: Corey crashes out as history is made across multiple sports

On the ice, history was made in both the figure skating, speed skating and ice hockey on Day Three of Beijing 2022, while Australia's Brendan Corey suffered heartbreak in the short track speed skating.

The Ice Sports presented some historic moments on Day Three of the Beijing 2022 Winter Olympic Games, none more so than Ireen Wüst who continued her claim as the most decorated speedskater.

Elsewhere, Kamila Valieva became the first woman to land a quadruple jump in the Figure Skating at the Olympics, while Demark celebrated its first-ever Olympic Ice Hockey win in an upset over the Czech Republic.

It wasn't at all a joyous night for Australian Brendan Corey however, instigating a crash in the Short Track Speed Skating Quarterfinal which saw him penalised, and out of the competition.

The Netherlands' Ireen Wüst has made history, becoming the first-ever athlete to win five consecutive individual gold medals at an Olympic Games, either Summer or Winter, after racing to gold in the Women's 1500m Speed Skating Final.

In doing so, finishing with a time of 1:53.28, she also claimed an Olympic Record, beating out fellow Dutch competitor Jorien ter Mors' Sochi 2014 record by .23 seconds, and won gold - her 12th Olympic gold overall from five Olympiads she's participated in.

Wüst was part of the 12th pairing, racing against Canada's Ivanie Blondin who ended up finishing 13th overall. The current World Record holder, Japan's Tagaki Miho won silver, 0.44 seconds behind Wüst while the Netherlands also found another place on the podium through Antoinette de Jong's bronze medal, finishing with a time 1.54 seconds behind Wüst.

15-year-old Russian Kamila Valieva created history during the Women's Free Skate Team Event, becoming the first woman to land a quadruple jump at the Olympics. However, she wasn't content with just one, landing two, and attempting three during her program on the way to a gold medal for her and her Russian Olympic Committee teammates.

Valieva won both the short and long programs in the Women's Singles Skating to add to the ROC's points total as she, along with Mark Kondratiuk, Anastasia Mishina, Aleksander Galliamov, Victoria Sinitsina and Nikita Kasalapov all contibuted in their respective events, leading to the final scores and placings.

Earlier in the day, the Pairs and Ice Dance components of the Team Event were contested with the ROC's Mishina and Galliamov winning the Pairs event with a score of 145.20, and the USA's Madison Chock and Evan Bates edging out the ROC's Sinitsina and Kasalapov by .90 points with a total score of 129.07 to take top spot in the Ice Dance event.

The ROC ended up with a 74-point total score across the collective skating events, beating the USA who claimed silver with 65 points, ahead of bronze medallists Japan - who captured its first-ever team event medal at the Winter Games - on 63 points.

MIXED CURLING FINAL A STONES THROW AWAY WITH SEMI-FINALS COMPLETE

The final session of the mixed doubles curling round-robin competition structure concluded today with four games being played, before the night saw the two semi-finals contested to determine who would play for gold and who would play for bronze.

Italy's Stefania Constantini and Amos Mosaner ensured they remained undefeated through nine games so far within their Beijing 2022 campaign by beating PyeongChang 2018 silver medallists Canada 8-7 to rule Rachel Horman and John Morris out of the tournament.

Norway (6-5 win over Switzerland) and Great Britain (8-4 win against the USA) also had final session victories on Day Three, each nation finishing second and third respectively on the final standings. The Czech Republic had a 8-6 win over China to round out the day as Sweden snuck into fourth place to progress to the semi-finals.

In the semi-finals, Italy was the first team to make it through to the gold medal match, beating Sweden 8-1 in seven ends to still remain undefeated through the tournament. After Italy got off to a 6-0 start through the first five ends, Almida de Val and Oskar Eriksson of Sweden got a point in the sixth end but then, Constantini and Mosaner made sure of the result with two points in the seventh end.

It was an up-and-down contest with both sides trading scoring ends, before a three-point sixth end saw Norway regain the lead, only for Great Britain to tie the match at five-all going into the eighth end. It came down to the last stone as Skaslien executed a perfect draw which saw the Norweigan rock enter the edge of the button, giving them the one point needed to advance to the final.

NOTHING SHORT OF DRAMA IN SHORT TRACK SPEED SKATING FINALS

The quarter-finals, semi-finals and finals for the Short Track Speed Skating, for both the Women's 500m and Men's 1000m events were on during the night of Day Three.

10 athletes advanced from the quarter-finals to the semi-finals of each event, with Kim Boutin of Canada having the fastest time across all four quarter-finals in the Women's 500m, while Korea's Lee Juneseo posted the fasted time (1:23.682) from each of the fur quarter-finals.

Australian Brendan Corey was involved in Quarterfinal Three, but was penalised for a lane change - trying to get from third into an automatic-qualifying second place - that caused contact, and saw him, and fellow competitors crash on the final turn of the final lap, ending his chances of progressing.

From the Women's 500m, two competitors from each of the two semi-finals advanced to Final A, whereas the next two fastest from each semi-final advanced the Final B. The Netherlands' Suzanne Schulting found a place in Final A, finishing Semifinal Two with a time of 42.475 seconds.

In the Men's 1000m, it was the same athlete progression path as the women's although, due to a penalty and a DNS within Semifinal One, the fifth-fastest athlete from Semifinal Two advanced to Final B too. Hungary's Shaolin Sandor Liu, in Semifinal Two, posted a time of 1:23.567 to qualify for Final A.

It was a closely-contested Final A in the Women's 500m with just .453 seconds separating first and fifth place, but ultimately, Italy's Arianna Fontana won gold - defending her PyeongChang 2018 gold medal - in a time of 42.488 seconds. Schulting and Boutin won silver and bronze respectively.

China and Hungary were both well-represented in Final A of the Men's 1000m, each of the five competitors coming from one of those two countries, and it wasn't a race that was without drama.

Hungarian Shaolin Sandor Liu appeared to have won the race with the fastest time but was penalised and given a yellow card, handing the gold medal to China's Ren Ziwei (1:26.768 seconds), with China's Li Wenlong winning silver and Hungary's Shaoang Liu to be awarded bronze. Ziwei has redeemed himself after he was disqualified during his 1000m Short Track Speed Skating campaign in PyeongChang 2018.

The preliminary rounds of the Women's Ice Hockey continued on Day Three in both Group A and Group B, with Canada continuing to dominate its opponents, beating the ROC 6-1, extending its goal difference to +26, sitting atop the Group A standings undefeated with two games to play. Canada scored two goals in each period, whereas the ROC scored in the second, all individual goal scorers.

The previously-winless Demark took it right up to the top seeded Czech Republic in its Group B match-up, eventually winning 3-2, earning the nation's first-ever Olympic Ice Hockey match. With scores tied at 1-1, and 2-2 after the first and second periods respectively, Denmark's Silke Glud found the net in the third period for what would be the game-winning goal.

The first two chances for the women and men to begin their training runs for the Skeleton was able to be achieved on Day Three, with Heat One and Two in both events.

In the women's, Training Heat One was dominated by Germany's Jacqueline Loelling and Hannah Neise, both finishing as the number one ranked skaters after completing the track in the same time of 1:02.34. The Czech Republic's Anna Fernstaedt finished in third place during the run. Australian Jaclyn Narracot finished the run in 11th place with a time of 1:03.09.

Training Heat Two for the women saw Neise again at the top, this time in second place, .30 seconds behind China's Zhao Dan, who finished with a time of 1:02.18. Jaclyn Narracott finished her run in a time of 1:02.68 to sit third from this second run.

In the men's, Training Heat One, similarly to the women's equivalent, saw two German athletes in the top two spots, Christopher Grotheer (1:00.42) and Axel Jungk, followed by the ROC's Evginey Rukosuev. Australian Nicholas Timmings finished in 24th place with a time of 1:03.18.

In Training Heat Two, Grotheer again topped the placings with a time of 1:00.79, ahead of Latvia's Tomass Durkurs and the ROC's Alexander Tretiakov. Timmings improved his placing, finishing 22nd in this run, with an improved time of 1:03.06.

The training runs continue for athletes in the luge at Beijing 2022, with the doubles pairings having their third and fourth attempts earlier on Day Three.

In Training Run Three, Austria's Thomas Steu and Lorenz Koller finished first with a time of 58.533 seconds ahead of Latvia's Andris Sics and Juris Sics, with Germany's Tobias Wendl and Tobias Arlt in third place.

In Training Run Four, it was the same three pairings who finished within the top three, however, the only change was the German and Latvian pairs switching placings from their Training Run Three positions, although it was a smaller gap in the times between first and second place.