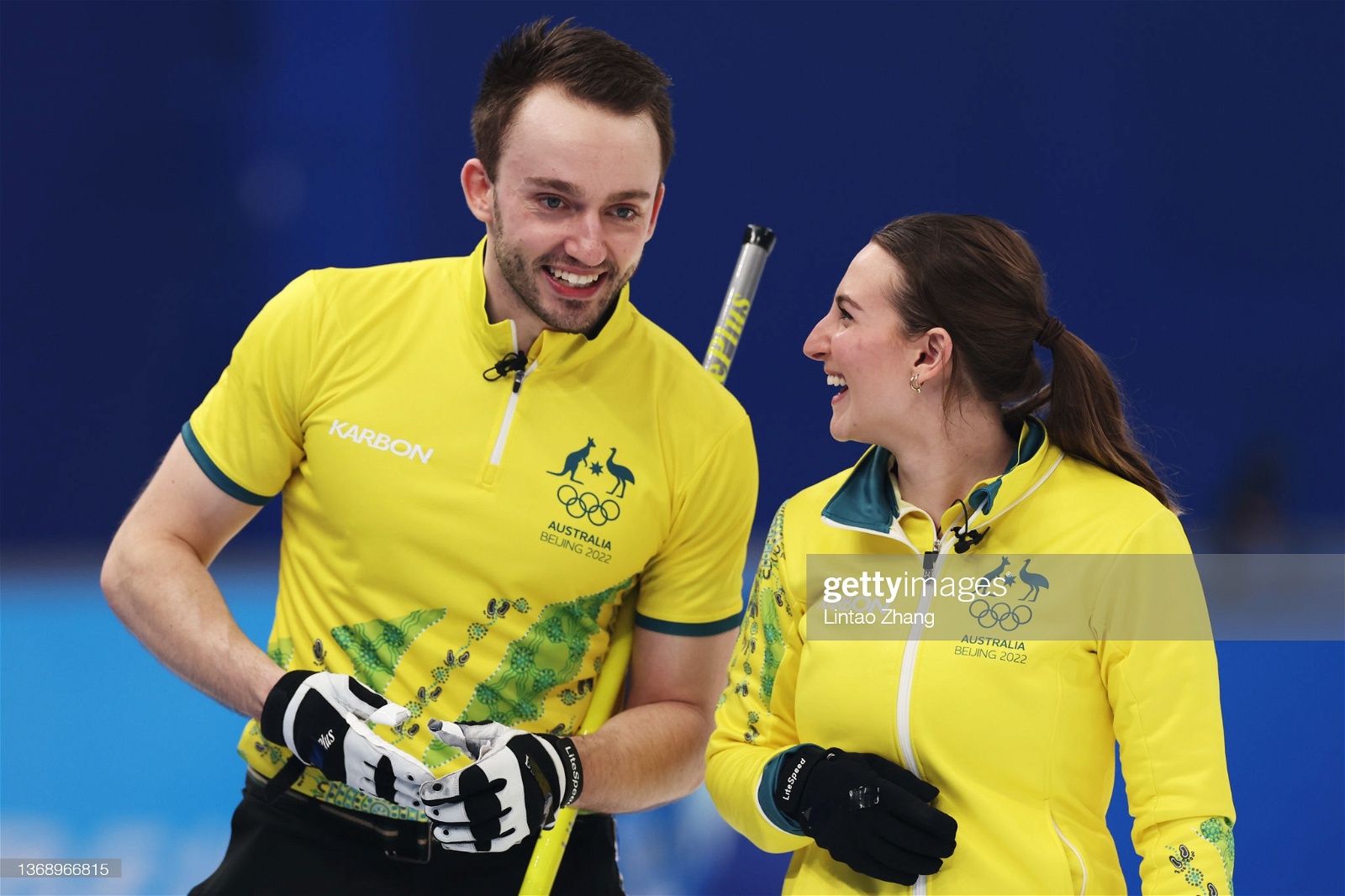 It started out as a chaotic day for the Australians with the Curling team's Olympic campaign seemingly ending early but the story didn't end there and only got better after the pair were given a later reprieve ahead of their matches.

Australia fell in love with Tahli Gill and Dean Hewitt over the course of the first few days of competition of Beijing 2022 and with only two games left to play the nation was left heartbroken when it was announced that their campaign would be ending early due to Gill testing positive for Covid-19 once again.

It appeared as though all hope was lost until the late announcement came through that the Aussies had received a reprieve a little over an hour before their match against Switzerland was due to start.

Anyone would have expected the pair to have been rattled but instead, they returned to the Ice Cube looking just as good as they had on Day -2 when they officially introduced themselves to Australia.

They started the match with a double, with a draw shot from Gill on the hammer coming around the guard and the stone that was almost kissing the red circle to touch the button, but even more impressively they managed to steal a point on the second end to take a 0-3 lead.

The pair weren't able to steal again on the third end but another well placed shot from Gill limited the Swiss to just a single point.

The first signs of wobbling came in the fourth end when the Swiss stole three points after a promotion take-out shot from Gill only managed to knock out one Swiss stone and took out two of the Aussie's own as well.

Another two points were stolen from the Australians in the fifth end but they fired back in their power play to score a triple making the score 6-6 with two ends to play.

The Swiss power play came in the next end but it was the brilliant draw shots from Hewitt and a few errors from the Swiss that helped the Aussies steal a double.

With their first win on the line, the Aussies had one job in the final end, limit the Swiss to one point off the hammer shot. However, they did even better than that, setting the run of stones that kept their stone in shot rock position and setting guards that made it near impossible to attack.

They stole another point from the final end to take Australia's first Curling win at the Olympics but the day wasn't over there.

In their second match for the day and final game for the Olympics, Gill and Hewitt faced their coach John Morris of Canada and his partner Rachel Homan, in what could only be described as a battle between the students and the master.

The Aussies of out to a blistering start scoring a triple from the first end and then stealing a double in the second, putting them 5-0 ahead after two rounds.

But their dominant opening ends didn't stop there, stealing again on the third end and then for the fourth consecutive end taking a point by the barest of margins to lead 0-7 at the halfway point of the match.

The Canadian's came back into it in the fifth end, however, scoring four points from the end but the Aussies bounced back with a single in the sixth end.

The biggest threat to the Australians at this point was the clock that was ticking down fast with only two and a half minutes left to finish their shots with the better part of two ends to play. They gave up a triple on the seventh end and with a minute to go for the entire eighth end it was understandable that they were rushing.

Going too heavy on the take-out shot Gill was unable to jam the stone on the final shot of the end which gave the Canadians one point to send it to extra ends and add a few more minutes to the clock for the Australians.

However, after losing the eighth end they had one major advantage, they had the hammer shot and were in the best position to take out the end. Ultimately they didn't even need their final shot and claimed two points on the extra end to win the match 8-10 and taking their second win in the final match of their Olympic campaign.

After sitting in 19th after two runs in the Luge Alex Ferlazzo put down an incredible third run of 58.122 to advance his ranking and sit in 16th, granting him a fourth and final run at his third Olympics.

Still having juice in the tank Ferlazzo went even better putting up the 12th fastest time in the fourth run (57.887), but it wasn't enough to move him up the rankings and he had to stay in 16th finishing with a combined time of 3:53.219 only 0.047 seconds behind Austria's David Gleirscher.

However, the big winner was Germany's Johannes Ludwig, who broke his own track record again with a time of 57.043 in the third run and didn't fair much worse in the final run finishing at 57.191 seconds for a total time of 3:48.735.

It marks his second Olympic gold medal but his first in the singles event after taking home bronze in Pyeongchang in 2018. Right behind him was Austria's Wolfgang Kindl (3:48.895) and Italy's Dominik Fischnaller (3:49.686), with the pair winning their first-ever Olympic medals.

It came as no surprise to skating fans when Kamila Valieva (ROC) blitzed the competition in the Women's Short Program of the team event on day two, beating her nearest competitor Wakaba Higuchi (JPN) by 15.45 points to secure 10 points for the Russian Olympic Committee and bump it into first place ahead of the cut.

However, it was Madeline Schizas that was the talk of the town after she shocked all watching with a personal best score of 69.60 to finish in third and keep Canada inside the top five when the field was cut in half.

The United States' Karen Chen didn't have her best day only scoring 65.20 but Georgia's Anastasiia Gubanova put down an incredible program including having the highest-scoring single jump but didn't get the marks needed overall and scored a 67.56.

Ultimately it was ROC, The United States, Japan Canada and China that progressed through to the free skate with China's pairs win breaking the tie between it and Georgia to keep the host nation in the competition.

The men's competition featured two substitutions from the short program with Yuma Kagiyama coming in for Shoma Uno for Japan and Vincent Zhou stepping in for Nathan Chen for the United States.

At just 18 Kagiyama has already won a Youth Olympic Games gold and a World Championships silver at his debut senior Worlds and his Olympic debut was nothing to scoff at either.

Landing four quad jumps, commentator Belinda Noonan had the only adequate response for the program when she described Kagiyama's opening quad salchow as "chef's kiss," and when he nailed his quad loop in the next jumping pass it was obvious he was going to be hard to beat.

Aside from a level three on his step sequence, the program was hard to fault with all nine judges ranking him in first and earning a score of 208.94, breaking the 200 point barrier for the first time in his career.

It wasn't quite to the level of his career-best performance at European Championships last month but he has well and truly stepped up as a leader in Russian Men's Figure Skating in Beijing, earning 181.65 points to earn Russia nine points.

Vincent Zhou's rotation issues returned, singling his intended quad flip and underrotation both his quad salchow and his quad toeloop, while his opening jump, quad lutz, was judged as being landed on the quarter, which while it didn't affect his base value score did hurt his grade of execution marks.

He cleaned up the back half of his program, managing to avoid making any further errors but the blows to his technical score caused him to drop into third place and score a 171.44.

Boyang Jin (CHN) made several costly errors throughout his program but opened with a gorgeous quad lutz to score 155.04. While nerves got the best of Roman Sadovsky (CAN) struggling to land a single jump cleanly, however, thankfully he'll be able to chase redemption in the men's singles event later this week.

Right now the Russian Olympic Committee leads the standings with Japan nipping at the United States' heels looking to take the silver medal out from under them.

The Men's 5000m Speed Skating Olympic Record was broken twice on day two in spectacular fashion with Dutch skater Patrick Roest breaking it first with a time of 6:09.31, taking down the 2018 record of 6:09.71.

An unexpected feat due to the National Speed Skating Oval being at sea level, whilst the 2018 arena was at altitude.

However, the record didn't stand for long after current world record holder Nils van der Poel smashed past it to finish in 6:08.84, claiming the gold medal after an incredible 2021/2022 season.

Norway's Hallgeir Engebraaten rounded out the podium taking bronze with a time of 6:09.88, earning his first Olympic medal at 22.