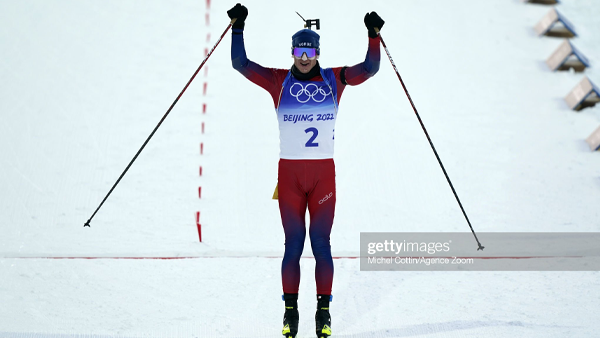 There was just two snow sports on display in Beijing on Day 14, Biathlon and Freestyle Skiing, with Eilieen Gu and Johanne Thingnes Boe continuing their medal-winning dominance at the 2022 Winter Olympics Games.

There was just two snow sports on display in Beijing on Day 14, Biathlon and Freestyle Skiing, with Eilieen Gu and Johanne Thingnes Boe continuing their medal-winning dominance at the 2022 Winter Olympics Games.

There were just two snow sports on display in Beijing on Day 14 of competition, the Biathlon and Freestyle Skiing, but four medal events across the day.

Eileen Gu continued her 2022 Olympic Games journey with a gold medal in the Women's Halfpipe, while Ryan Regez won gold in the Men's Ski Cross.

China's Eileen Gu's gold medal in the Women's Halfpipe is her third medal of Beijing 2022, finishing on the podium at each of the three events she competed in at this year's Olympic Games, after also winning gold in the Big Air, and silver in the Slopestyle.

After placing first after Run One with a score of 93.25, she improved upon that score in her second run, scoring 95.25. With the gold medal sewn up despite eventual silver medallist Cassie Sharpe of Canada saving her best score for last, Gu was able to soak it all in with a victory lap.

In his only event of Beijing 2022, in his debut Olympic Games appearance, Switzerland's Ryan Regez has won gold in the Men's Ski Cross Big Final.

Regez finished 0.34 seconds in front of fellow Swiss competitor Alex Fiva, who won silver, finally finding a spot on the podium after a DNF in 2014 and a ninth-place finish in 2018. In fact, the time difference between second and fourth was 0.02 seconds, with the bronze medal going to Sergey Ridzik of the ROC, his second consecutive bronze medal in the event.

DOWN EARLY BUT NEVER OUT FOR MEN'S, WOMEN'S MASS START GOLD MEDALLISTS

In the Women's 12.5km Mass Start, France's Justine Braisaz-Bouchet won gold - her second Olympic Games medal after a bronze from PyeongChang - in a time of 40:18.0. The time was 15.3 seconds ahead of silver medalist Tiril Eckhoff of Norway and 34.9 seconds in front of eventual bronze medallist Marte Obslu Roeiseland of Norway.

Each of the athletes that finished atop the podium received four shooting penalties and in the race itself, Braisaz-Bouchet only really entered into a medal position throughout the last 5km. After finding herself in 20th 2.5km into the race, she slowly climbed her way back up and, at the 8.4km mark, got into the lead, where she didn't waver until the finish line.

In the Men's 15km Mass Start, Norway's Johannes Thingnes Boe has won his fourth gold medal of Beijing 2022, and his fifth medal of these Games overall after a bronze medal earlier in the Men's 2km Individual. He had only won one gold medal in his past two Olympiads prior to this year.

Coming in second place and winning a silver medal was Sweden's Martin Ponsiluoma, finishing 40.3 seconds behind Boe, while Velte Sjaastad Christiansen of Norway was 1:12.5 away from first place, claiming bronze.