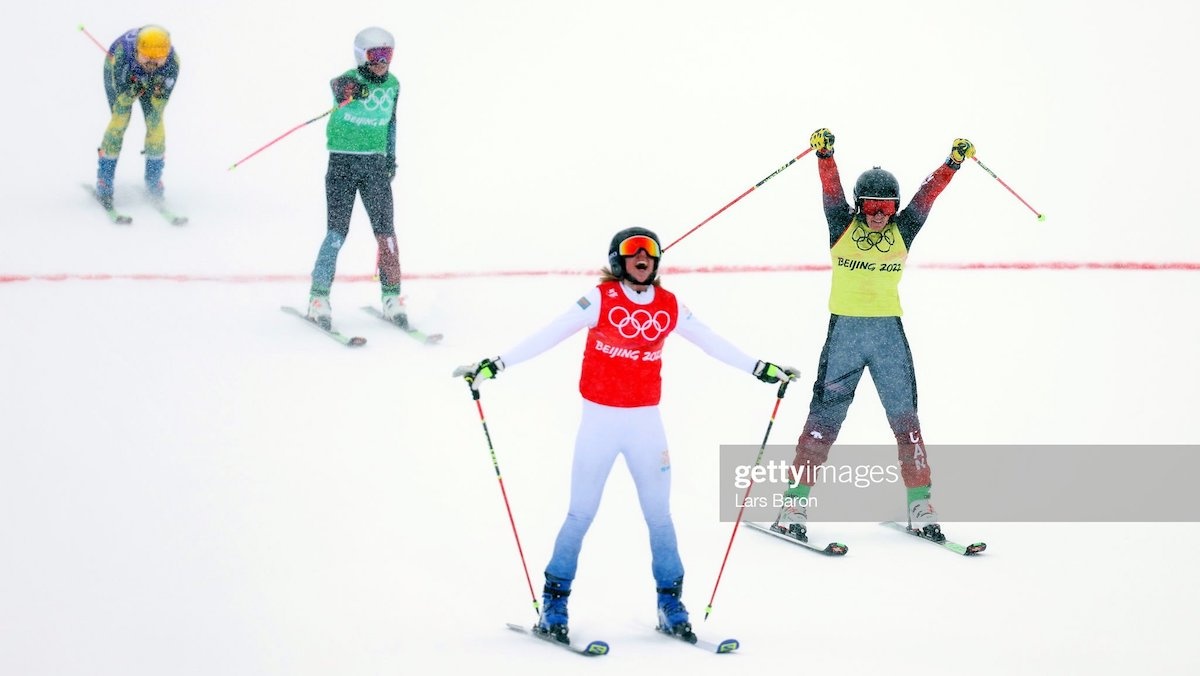 It all came together on the alpine ski slopes on Day 13, as the women completed one downhill and one slalom run for the Women's Alpine Skiing Combined.

The conditions got tougher as the day went on, after blue skies during the Downhill run, snow falling created an icy course, which was challenging for all competitors.

Swiss skier Michelle Gisin won gold, after being ranked 13th following the Downhill component, retaining her title as Olympic Champion in the event. Her compatriot Wendy Holdener came from 11th to be awarded Silver, while Frederica Brignone took home Bronze after starting eighth on the standings going into the slalom run.

Gisin's total time was 2:25.67, 1.05 seconds ahead of her fellow Swiss skier and silver medallist Holdener.

Australian Greta Small was in action. She completed the Downhill run in 1:34.38, which had her in 18th.

On the slalom course, Small moved up into 13th position. While her time of 1:00.17 was on the slower side, eight seconds behind the leader, she did finish the run, which was something nine competitors didn't do.

Sandra Naeslund continued her dominant World Cup form on the Olympic stage, claiming the gold medal with an exceptional performance.

The Swede was the fastest qualifier in seeding, by almost two seconds, and proceeded to win each of her heats on the way to taking Gold.

She finished ahead of Marielle Thompson of Canada, who took Silver, and German Daniela Maier who won Bronze.

The final was not without its controversy after the judges deliberated over interference and relegated Switzerland's Fanny Smith, who initially crossed the line third. Smith lost her medal position, while Maier - who thought she was finishing fourth - ended up on the podium.

Australian Sami Kennedy-Sim equalled her best Olympic result, with an eighth-place finish. In challenging conditions and constant snow, Kennedy-Sim started as the 11th seed and made the most of some strong starts to progress through the 1/8 and quarter-final races.

It wasn't to be in the semi-final though, where Kennedy-Sim made an early mistake that meant she was out of contention for qualification to the big final, settling for a place in the small.

In the small final, Kennedy-Sim was left trailing a trio of Canadians and unfortunately was stuck in last, but it was still an eighth-place finish for the Aussie.

Free Skiers test out their skills on the halfpipe

The Women's Halfpipe qualification was first on Day 13, a 9:30 am local start time favoured some of the early rising competitors more than others.

Eileen Gu was simply brilliant, continuing her form from the Big Air and Slopestyle events, where she won Gold and Silver, respectively.

Opening with a right-side nine into a left-side nine, Gu was floating in the air on her tricks and pulled out a score of 93.75 with her 'safety run'.

She improved that score to 95.50 in the second qualifying run, her best run exceeding the score of the next best competitor by six points, an incredible margin for the 19-year-old going for her second gold medal at these home Games.

Canadian Rachael Karker is the next best competitor, who will ski before Gu in the three final runs. She scored an 89.50 on her second run, which saw her hold second position.

Kelly Sildaru of Estonia scored 87.50 with her first run and elected not to start for the second, with her first score enough to carry her through as the third qualifier.

There are a total of three Americans, three Canadians and three Chinese athletes in the final 12, with Estonian Sildaru, Brit Zoe Atkin and German Sabrina Cakmakli rounding out the field.

In the men's qualifying a little while later, a score of 92.00 from American Aaron Blunck was enough to qualify first for the finals on Day 15.

New Zealand's Nico Porteous was right behind on 90.50, after he had incredible improvement in his second run following a disappointing 75.50 on his first.

Two-time gold medallist and the only Olympic Champion in this event, American David Wise, qualified fourth with a score of 89.00. He had two consistent runs in the late 80s, but will have a nervous wait in the final should he sit atop the standings after his third run, with three of the world's best to follow him.

Canadians Brendan Mackay and Noah Bowman are also in the top half of the field, with solid scores in the high 80s.

It was a 14th gold medal for Norway to end Day 13 on the snow, in the Team Gundersen Large Hill/4x5km Cross-Country Skiing event, they powered away to an impressive lead in the final five kilometres for the victory.

During the Large Hill Ski Jumping, Austria scored 475.4 points combined, the best of any team. Starting eight seconds behind would be Norway, who scored a total of 469.4 points in the jumping component.

There was then more than a minute between Japan and the fifth-placed team, France, who started the 4x5km skiing 1:27 behind Austria.

To conclude the day on snow, the teams raced a 4x5km cross country ski relay, where the top four teams battled for the three spots on the podium.

At the first exchange, Germany led Japan and Austria, who had been in front throughout the opening leg. They regained the lead through the second racer before Norway moved into the lead ahead of the third and final exchange.

Joergen Graabak pressed on to win Gold for Norway, almost a minute ahead of silver-winning side Germany and bronze medallists Japan.