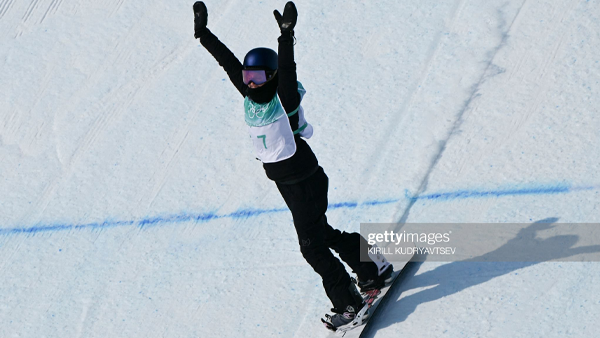 In the snow events on Day 11 of Beijing 2022, Austria's Anna Gassar defended her 2018 Big Air gold while it was a good day for Switzerland and Norway, claiming gold in two events each.

In the snow events on Day 11 of Beijing 2022, Austria's Anna Gassar defended her 2018 Big Air gold while it was a good day for Switzerland and Norway, claiming gold in two events each.

Switzerland was celebrating big with two gold medallists on Day 11 of Beijing 2022 hailing from the country, while Anna Gassar of Austria defended her 2018 PyeongChang gold medal in the Snowboard Big Air Final.

Norway was also celebrating two gold medals, each in events in which the respective athletes came from behind to make up many places on the way to the top-of-the-podium finish.

The Men's and Women's Snowboard Big Air Finals were both contested on Day 11 of Beijing 2022 with some big scores being posted all-round.

In the Women's Austria's Anna Gasser defended her 2018 PyeongChang gold medal in the event with a first-placed finish in Beijing with her first and third runs (90.00 and 95.50) contributing to her total score of 185.50.

New Zealand's Zoi Sadowski Synnott went one better on her 2018 result and won silver with a combined best score of 177.00, while Japan's Murase Kokomo won bronze by scoring 171.50 from her two best runs combined.

Australia's Tess Coady finished ninth overall, unable to complete her two final runs, ending up with her best score of 85.00 from the first run - which put her in third place at the time - and a 29.75, adding up to a combined score of 114.75.

Switzerland's Mathilde Gremund now has the complete set of Olympic medals after winning gold - her second medal of Beijing 2022 after bronze in the Big Air -, in the Women's Freeski Slopestyle Final.

Gremund, who was the silver medallist in the event four years ago, had just made the 2022 Final with a 12th-placed qualification, and had to recover quickly in this event after breaking a binding and losing a ski in her first run, which scored just 1.10.

She was able to bounce back though, claiming her best time of the three runs on attempt number two which scored 86.56.

Gremud was challenged by USA-born Chinese skiier Ailing Eileen Gu, who took silver, finishing with a score of 86.23 which she achieved with her final run. Coming in third place for the bronze medal was Estonia's Kelly Sildaru with a top-score of 82.06, which she scored on her first run.

Also in Alpine Skiing events on Day 11, the Men's Freestyle Skiing Slopestyle qualification runs were contested with the top 12 athletes with the highest scores across two runs from 31 athletes in total progressed to the Final. The field was lead by Switzerland's Andri Ragettli who's best score was an 85.08 while 2018 silver medallist Nicholas Goepper qualified with the third-highest score, 82.51.

Additionally, the Men's Aerials qualification runs were contested with the top six athletes from a field of 18 progressed to Final 1. In his Olympic Games debut, Ukraine's Oleksander Okipniuk lead the field with his best score of 125.00 coming from the second qualification run with the ROC's Ilia Burov and Belarus' Stanislau Hladchenka the only two who had qualified for the Final in PyeongChang also, the former being the bronze medallist from 2018.

It proved to be a good day for Switzerland in the snow events on Day 11 as Swiss skiier Corinne Suter won her maiden Olympic Games medal, and a gold at that, in her second Olympic Games, placing first in the Women's Downhill Skiing - an event she finished sixth in four years ago.

Suter improved upon her time from 2018 by 8.42 seconds, finishing the 2022 event with a time of 1:31.87. The 2018 gold medallist, Italy's Sofia Goggia claimed silver, finishing 0.16 seconds behind Suter while fellow Italian Nadia Delago finished third for a bronze medal in her debut Olympic Games appearance.

Australia had one entrant in the event, Greta Small, at her third Olympic Games, who finished in 26th with a time of 1:36.53, 4.66 seconds behind Suter.

Norway has won its first Men's 4x7.5km Relay gold medal since 2010, and improved on the silver it won in 2018, with Sturla Holm Leagreid, Tarjei Boe, Johannes Thingnes Boe - his third gold of Beijing 2022 - and Velte Sjaastad Christiansen combining for a winning time of 1:19:5.2 in the event on Day 11.

The team started slow with Laegreid succumbing to four shooting penalties before finishing the first leg with a time of 20:21.2 - seventh place. Tarjei Boe completed his leg in 20:40.1 minutes and incurred two shooting penalties, and despite it being the 11th-fastest time of the second leg, Norway went up to sixth place overall at the halfway point.

However, in the second half of the race, Johannes Thingnes Boe and Christiansen began to claw back. First, Johannes Thingnes Boe clocked a time of 19:10.9 - first among the third leg - which took the team into third place before the handover to Christiansen who continued to press along, crossing the line in a time of 19:38.0, which was enough to finish first and win the team a gold medal.

France's team of Fabien Claude, Emilien Jacquelin, Simon Desthieux and Quentin Fillon Maillet won silver, coming in at a time of 1:20:17.6. Representing the ROC - who was settled in first place with six minutes to go -, Said Karimulla Khalili, Alexander Loginov, Maxim Tsvetkov and Eduard Latypov won bronze with a combined time of 1:20:35.5.

Norway had athletes take up the top two places on the podium at the conclusion of the Individual Gundersen Large Hill event in a race that, in the end, saw 0.6 seconds separate first and third.

Earlier in the day, the Ski Jumping competition round was contested, lead at that point by Norway's Jarl Magnus Riiber with a total points score of 139.8.

However, when it came to the 10km Cross Country portion of the event, it was still a Norweigan who would finish in first place, but not Riiber.

Instead, after coming into the 10km Cross Country following a 12th placed ranking in the Ski Jumping, Joergen Graabak made up those 11 places and a time difference of 2.07 minutes - even ranking sixth with a time difference of 15.5 seconds with 1.5km remaining - to take gold. He finished 10th in PyeongChang.

Jens Luraas Oftebro came second and won silver, making up nine places after finishing the Ski Jumping in 10th position, coming into second place within the final 1.5km and finishing 0.4 seconds off the pace of his fellow Norweigan.

Watabe Akito - who finished fifth in 2018 - won the bronze medal, maintaining a steady pace throughout the 10km Cross Country after finishing fifth in the Ski Jumping. He remained in the top two placings within the first 6km of the race, before falling slightly but coming back into a medal position, finishing 0.6 seconds from Graabak.