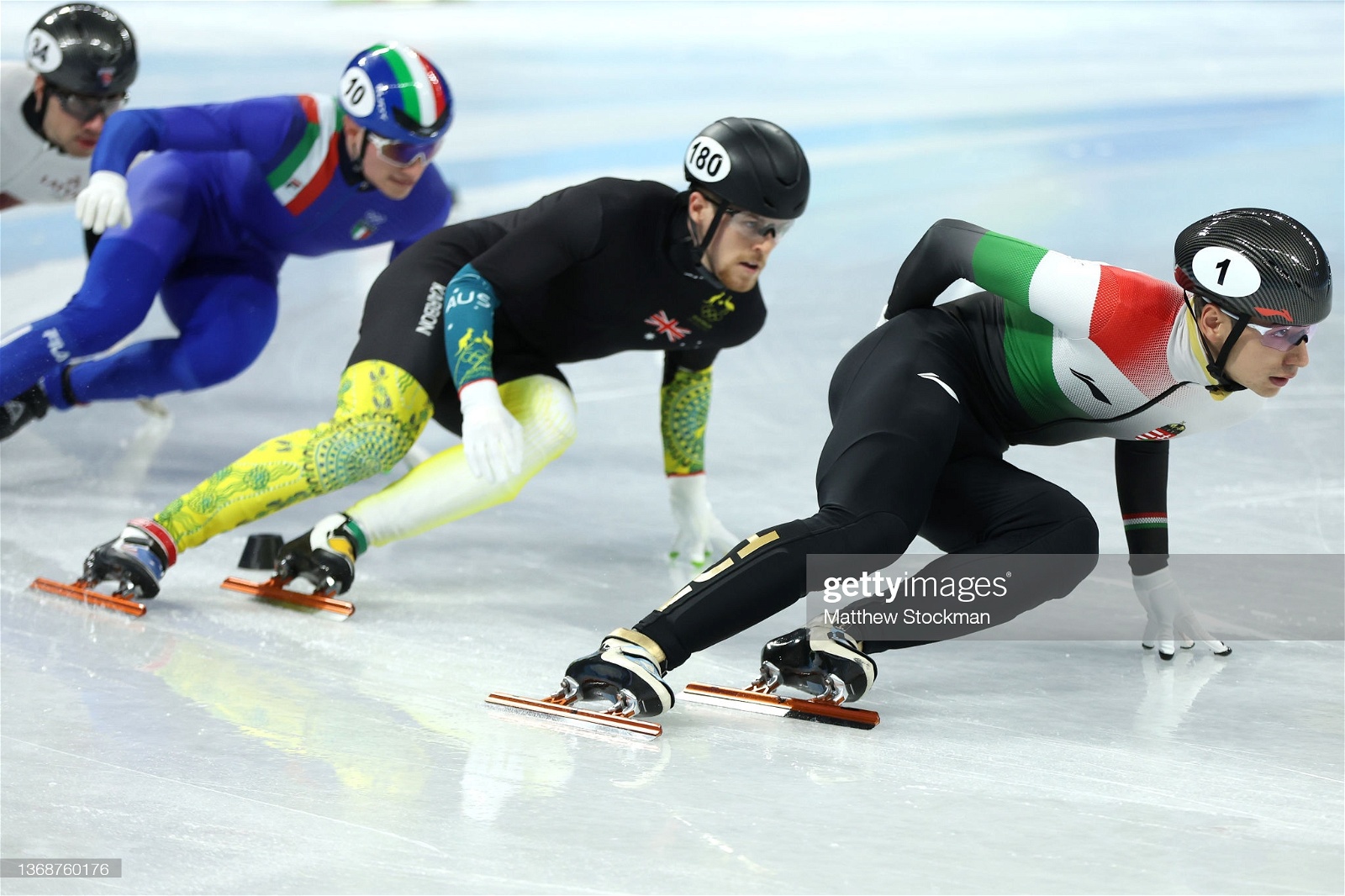 On the first official day of competition, there were Australians in three ice sport events, the Luge, Short Track Speed Skating and Curling.

However, the highlight of the day came from the drama in the Mixed Relay event where the host nation took home its first gold Medal of Beijing 2022.

Corey cool as a cucumber in Olympic debut

It's been 12 years since we've seen an Australian competing in the 1000m Short Track Speed Skating event, and Olympic debutant Brendan Corey was cool under pressure in his heat to qualify through to the quarter-finals.

Competing in the eighth heat, Corey was in the second-fastest heat of the day and put down the sixth fastest time of the day, setting a new Australian record in the process finishing with a time of 1:23.908.

The most impressive performance came from Daeheon Hwang, who broke the previous Olympic record finishing in 1:23.042.

Alex Ferlazzo's third Olympics got off to a good start putting down two runs in the Luge that have kept him in 19th overall after his two runs combined for a time of 1:57.210. Giving him a small buffer to stick around for the final run when the field gets cut to 20 after three runs.

Gold medal favourite Johannes Ludwig was the best on track in both runs and broke the track record he previously set at the test event in November of 2021. His best run came in the first run finishing in 57.063 seconds and having a combined time of 1:54.501.

At the halfway point Austria's Wolfgang Kindl is in the silver medal position 0.039 seconds behind Ludwig and Italy's Dominik Fischnaller is in the bronze medal position with a combined time of 1:54.805.

Double concessions in the Curling

It was another rough day in the Curling for Tahli Gill and Dean Hewitt with the pair conceding in both matches.

Their first match was against Norway's Kristin Skaslien and Magnus Nedregotten, and plenty of credit had to go to Skaslien who had her best match of the Games so far with several incredible final shots to steal more than one end from the Australians.

It was tough from the start for the Aussies giving up four points in the very first end, along with a double in the second end with Tahli Gill failing on a double take-out shot with the hammer.

The Aussies managed to get a point back in their next end, but it wasn't as many as they would have wanted only taking one from their powerplay to bring the score to 6-1.

They were unlucky to not take a steal in the fourth end with both teams having a stone inside the button and luck finally went their way when they scored three points in the fifth end after a high-risk promotion take-out shot from Gill succeeded.

However, the joy was short-lived after Norway used its power play and all of their guard stones were wiped out from a double take-out by Nedregotten, and a promotion take-out shot from Hewitt failed. The Norwegians took three points from their powerplay and the Aussies conceded seeing the writing on the wall despite having two ends left to play.

Their second match of the day against Italy started far better, getting a steal on the first end, and they looked more evenly matched initially against the undefeated team of Stefania Constantini and Amos Mosaner only giving up a double on the second end after a successful take-out shot from Constantini.

The Italians got a steal in the third end and the Aussies got a point in the fourth to make it 3-2 at the halfway point of the match by the skin of their teeth.

An incredibly placed stone in the fifth end was the only thing preventing an Australian triple steal in the third end with Italy stretching its lead and another powerplay didn't give Hewitt and Gill the lift they needed only scoring one point from the end for the second time today.

China took home its first Gold medal of the Games in the Mixed Team Relay event of the Short Track Speed Skating but it wasn't without drama.

The first semi-final went off without much drama with Canada and Italy progressing through without much trouble at all. However, the second semi-final had it all with Hungary and China making it through to the final but only after ROC and the United States of America received penalties and were disqualified.

Then came the B Final which only featured the losers for the first semi-final Kazakhstan and the Netherlands. Looking for redemption the Netherlands were flying and managed to break to put down the third-best time of the event only beaten by its own Olympic Record in the quarter-finals and Canada's time from the same race.

The A Final had its own drama with Italy and China duking it out to win gold and silver and China taking it by 0.016 seconds, but the battle for bronze was decided due to a collision between the Hungarians and Canadians that saw Canada be disqualified.

Italy's Arianna Fontana became the most decorated short track speed skater with the silver medal becoming her ninth Olympic medal and the 31-year-old still has two events to go, competing in the 3000m Relay and the 500m events later in the week.

It's one thing to hold an Olympic Record, but it's a whole other thing to see your 20-year-old Olympic Record finally be beaten when you're still a competitor but that's what happened for 29-year-old Claudia Pechstein who is competing in her eighth Olympics this year, in the Women's 3000m Speed Skating event.

It was Irene Schouten from the Netherlands that took down the record by just under a second finishing with a time of 3:56.93 beating her other competitors by over one second. She had to wait for the first nine two athlete races to finish before it was her turn but she looked confident under pressure ahead of every split from the jump.

Italy's Francesca Lollobrigida finished in second with a time of 3:58.06 and Canada's Isabelle Weidemann took out bronze with a commanding difference between herself and fourth place.