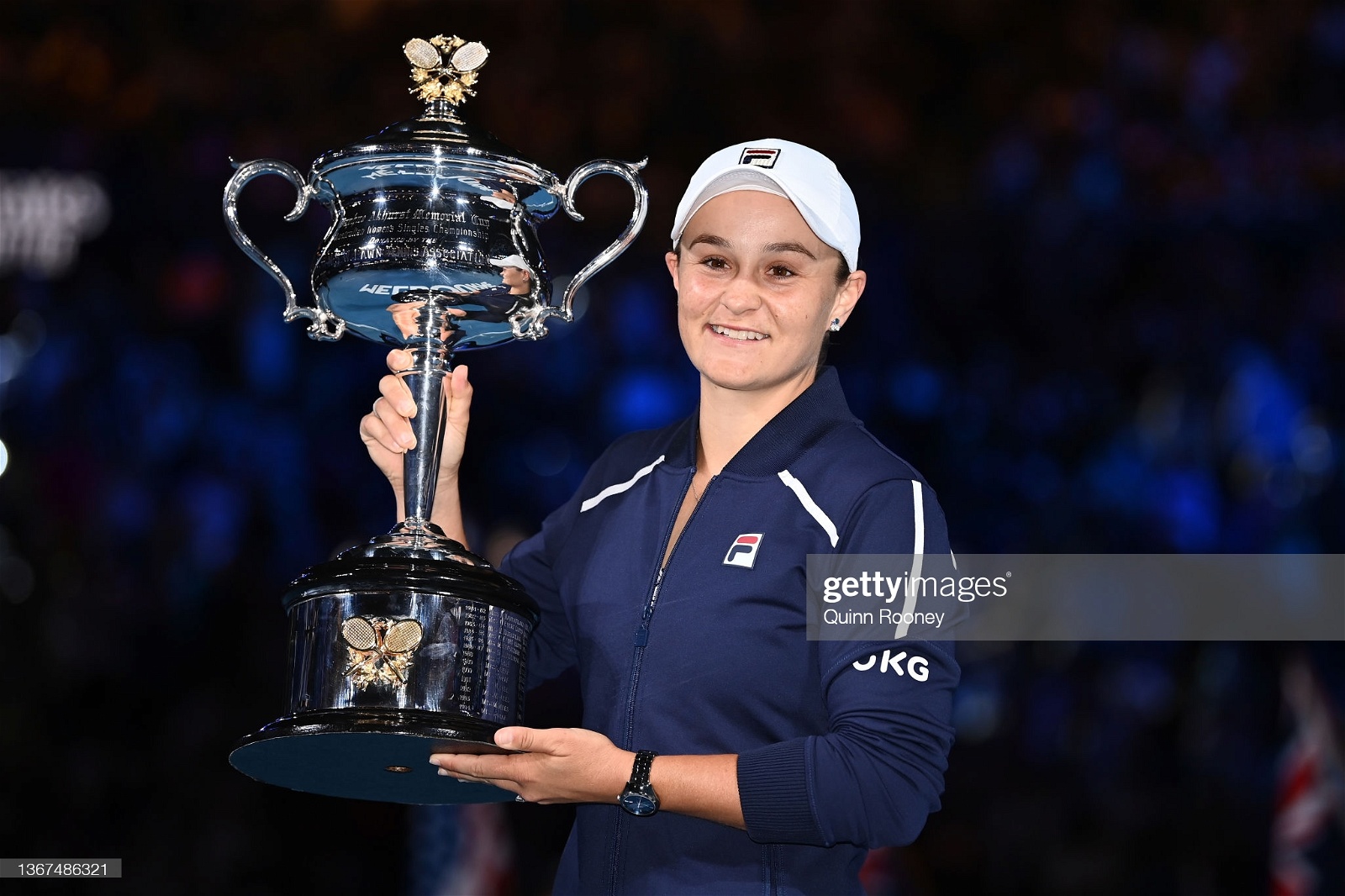 World Number One Ash Barty has dared to dream and won her third grand slam title, becoming the first in 44 years to do it at home.

World Number One Ash Barty has dared to dream and won her third grand slam title, becoming the first in 44 years to do it at home.

World Number One Ash Barty has done it, the Australian came from 1-5 down in the second set to win her third grand slam title and her first at home. With the win, she becomes the first Aussie in 44 years to win the Australian Open.

The World Number One dropped just one service game, to her fourth-round opponent Anisimova, before Saturday night.

The pair had met four times on tour, including in Barty's title run at Roland Garros and twice in Adelaide, where Collins beat the World Number One at the start of 2021.

With the stage set, Barty opened the final and serving first she started with a fairly comfortable, clean game that allowed her to settle into the conditions on Rod Laver Arena.

Collins also took a few service points to find her rhythm on court, but found it with a forehand winner and then service winner.

Both players held comfortably, Barty serving two aces in her game, though made some unforced errors on Collins'.

Faced with a break point in the third service game, Barty hit a forehand cross court to save it and level things at deuce. From there, Collins made an error and Barty served it out with an ace.

Putting the break point behind her, Barty returned to the aggression we've seen all tournament on return games. She moved Collins around and drew a couple of unforced errors, before a double fault gifted Barty the break, and she led 4-2 in the opening set.

Barty continued her strong service run, faltering just slightly at 40-0 with a double, but swiftly tied up the consolidating service game.

Collins held and then Barty served out the set with a game to love.

With the Australian wrapping up the first set and the crowd well and truly on her side, Collins did well to keep herself level-headed and held in the opening game.

She then put the pressure on and found the cracks in Barty's service game. Errors off the racquet of the World Number One set up two break point opportunities for Collins.

An ace saved the first, but Barty was unable to do the same for the second and found herself down in the second set.

A ripping forehand up the line from Collins put Barty under pressure and the American secured the break with a winner in the wide open court.

Thrilled with the break, Collins' excitement was perhaps a little too high in her service game, she pushed three backhands long that gave Barty a chance to break back immediately.

Coming into the net, Collins didn't have to volley, the presence enough to put Barty off the passing shot. The American was able to pull herself out of trouble and keep her lead.

Barty held with clean and strong service game, featuring an ace, a service winner and a stunning backhand winner.

On the back foot in her service game, Collins was not afraid to come into the net and had success doing so. She forced Barty into a lob that was nowhere near high enough to get over the American.

Serving at 1-4 in the second, Barty lost her service game again with the wind behind her. Two double faults and an easy smash volley that Barty put out of play handed Collins the double break.

With nothing to lose and Collins serving for the set, Barty attacked the game with a ferocity we hadn't seen this set. She started making her forehand winners, drew Collins into some tougher shots and got the crowd involved again.

Barty was challenged by Collins but held, and then put the pressure straight back on the American.

Her trademark slice backhand put Collins in the corner of the court and she sent the backhand into the net, the set back on-serve at 4-5. Barty then served, with little trouble, to level the second set, the match had certainly swung back in her control.

In the tiebreaker, Collins sent a forehand long to give Barty the early edge. The Australian ran with it, opening up a 3-0 lead with a forehand winner.

Barty played attacking tennis, forcing her opponent around the court and pushing out to a 5-1 lead in the tiebreak.

The Australian set herself up with four Championship points, but it only took her one. The World Number One sent a passing forehand cross court and let it all out as she secured her first Australian Open, finally, the home Slam was hers.

From 1-5 down, Barty pulled off an incredible comeback, continuing her run of straight sets victories through the entire Australian Open.

It has been a remarkable start to the year for Barty, who has not dropped a set since the opening round against Coco Gauff in her title run at the Adelaide International.

The presentation was made even more special when Barty's idol, Evonne Goolagong Cawley arrived on court to present the trophies.

After accepting the Champions trophy, the first Australian woman since Chris O'Neil in 1978 to do so, Barty was almost speechless at the achievement. She found her words though, as she graciously spoke about Collins, thanked the tournament organisers and volunteers, and then her team.

"To my team, wow. I've said numerous times, I'm so lucky tonight to have so many people here who love me, support me.

"Pretty bloody special that mum, dad and my sisters are here. I'm pretty wrapped with that, that they could come down today.

"I'm an incredibly fortunate and lucky girl to have so much love in my corner and that comes, we started right together, right from the start in this second part of our career and we did it all together.

"No one has changed from our team, it's been incredible... You're the absolute best in the business and I can't thank you enough for all the time you put into me.

"I think, as an Aussie, the most important part of this tournament is being able to share it with so many people and you guys today in the crowd have been nothing short of exceptional.

"This crowd is one of the most fun I've ever played in front of and you guys brought me so much joy out here today.

"You relaxed me, you forced me to play my best tennis, and against a champion like Danielle I know I had to absolutely bring that today."