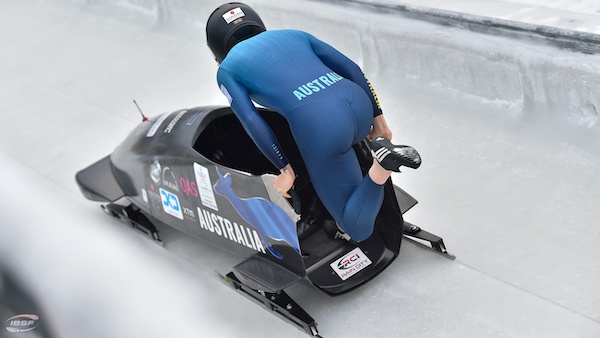 Australians in fine form for qualifying ahead of Beijing 2022

Bobsled duo Bree Walker and Ash Werner had medal success, while Jakara Anthony highlighted another strong week for the Australians qualifying for Beijing 2022.

Australians in fine form for qualifying ahead of Beijing 2022

Bobsled duo Bree Walker and Ash Werner had medal success, while Jakara Anthony highlighted another strong week for the Australians qualifying for Beijing 2022.

It was another strong weekend for Australians competing around the world, finding form and qualifying for the Beijing 2022 Winter Olympics at World Cup and circuit events.

Australia had 11 top-10 finishes across the snow sports, including a second-place for Jakara Anthony, and found medals on the bobsled track as well, to go with strong skeleton and luge performances.

It was another positive weekend for the bobsled and monobob athletes, with Bree Walker continuing her successful World Cup season and earning another podium finish.

Walker won silver in the monobob in Winterberg, Germany 0.17 seconds behind USA's Elana Meyers-Taylor, and with a combined time of 1:58.93.

It is the 29-year-old's fifth podium of the season and moves her into second on the overall World Cup rankings.

Four years after Walker and Werner earned and Olympic spot as a team but weren’t sent to Pyeongchang,both athletes are on the cusp of earning quota spots in their own right.

It was a double-header late last week in Tremblant, Canada, with Australia's moguls skiers competing in two World Cup events in two days.

It was another successful outing for 23-year-old Anthony, her sixth podium finish of the season put her in second place in the overall World Cup rankings.

She is in incredible form ahead of Beijing 2022, an Olympic medal favourite winning silver in the second of the two events in Tremblant.

On the first day of competition, she scored 77.40 to finish fifth in the final, however, improved to 79.02 on the second day for second place, behind reigning Olympic gold medallist Perrine Laffont.

Australia's best results across the board came in the second event; Britt Cox (73.81) and Brodie Summers (78.66) finished 13th, in their respective events, while James Matheson sat in 16th on 75.33 points.

Cooper Wood was the only Australian skier who had his best result on day one, it was also his personal best finish at a World Cup event, placing ninth.

Aerial skier Danielle Scott has moved into third place in the World Cup standings, after finishing just off the podium at Le Relais, Canada.

Scott qualified in second place for finals, after landing a number of impressive jumps, such as her double full-full which scored 90.94 points.

Then, in the opening round of finals, Scott jumped triple back somersaults and a lay-tuck-full, increasing her difficulty and increasing her score to 97.57 points. This saw her advance to the super final in second place.

After nailing the landing in the first final, Scott added an extra twist to her triple back somersault jump in the super final, performing a full-tuck-full, but was marked down for her landing to score 79.89 points, and see her slide to fourth.

In Winterberg, Germany, Jackie Narracott had one of her best results this season, securing 11th place in the Skeleton World Cup event.

This was 1.12 seconds behind Dutchwoman Kimberley Bos, who won the event with a combined time of 1:56.04.

Luge racer Alex Ferlazzo qualified through the Nations Cup event, where he finished fifth with a time of 48.752, for the World Cup competition in Latvia.

ASCENDING OLYMPUS – ONE MONTH TO GO UNTIL BEIJING 2022

Belle Brockhoff has finished fourth in both women's events at the World Cup doubleheader in Krasnoyarsk, Russia.

The Australian team missed the podium by one place on three occasions over the three days, with Adam Lambert making the big final in the second event, only to finish in fourth place as well.

In the second event, Brockhoff surged through to the big final and again just missed out on the podium finish, with the podium identical to the first event. Baff finished in 17th.

Lambert improved his first event result to make the big final on the men’s side but was behind Martin Noerl (GER), Jakob Dusek (AUT) and Eliot Grondin (CAN) for a fourth finish.

Dickson came in sixth, Bolton in ninth and Hughes in 17th, for more positive results on the second day of competition.

Brockhoff is currently ranked third in the women's World Cup standings, while three men are ranked inside the top 15 with Adam Lambert in 10th, Cam Bolton in 11th and Adam Dickson in 14th.

The snowboard, Freeski halfpipe and slopestyle competitors headed to Mammoth Mountain, California for the US Grand Prix and World Cup events.

Valentino Guseli finished in 13th in the snowboard halfpipe, scoring 67.66, just missing the top 12 final. American Shaun White opted to sit out of the final day of competition and Ayumu Hirano of Japan claimed gold with a score of 95.80.

Over in the slopestyle, Abi Harrigan was the only woman in the women's ski, where she finished 24th with a score of 35.00.

And on the snowboard, Matt Cox took on the slopestyle, finishing 22nd with 61.50.