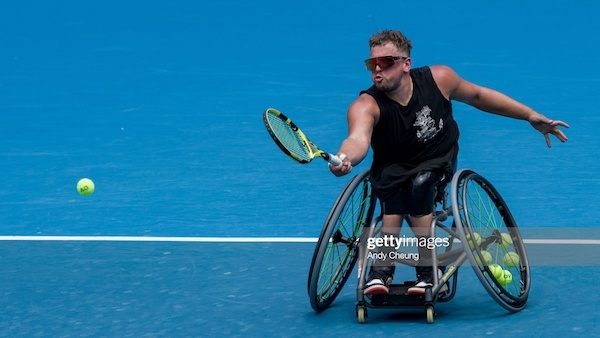 Singles action gets underway at Australian Open today, but Doubles, Wheelchair and Quad Wheelchair events will soon be on the radar.

Singles action gets underway at Australian Open today, but Doubles, Wheelchair and Quad Wheelchair events will soon be on the radar.

The Australian Open is underway and while all the fanfare is about the Singles competitions right now, attention will shortly be shared with the Doubles, Wheelchair and Quad Wheelchair events.

Inevitably, a Grand Slam throws up some interesting results, especially on the doubles court. However, there are clear contenders that play a class above when under the pressure of the first Slam of the year.

Two 2021 Golden Slam winners in Diede De Groot and Dylan Alcott will also be back in action in their respective draws, aiming to retain their Australian Open crowns for another year.

TheEdge of the Crowdtakes a look at the players to watch in the Doubles, Quad Wheelchair and Wheelchair events this Australian Open.

Croatian duo Nikola Mektić (2) and Mate Pavić (1) start the new year as the world number one doubles pairing after dominating the first half of 2021.

They won nine titles including Wimbledon and Tokyo Olympic Gold, and although they fell away later in the year with a First Round loss at the US Open and a semi-final finish at the ATP World Tour Finals, this pair is already the one to beat in 2022.

In the opening round, they've drawn Argentinian pair Facundo Bagnis and Federico Delbonis, who they should make quick work of, before facing a team of Australian wildcards.

The second seeds didn't start the year, as well as they'd have hoped in Adelaide, but American Rajeev Ram and Englishman Joe Salisbury will be eager to hit the court in Melbourne.

This is a Championship winning pairing from 2020 that'll be working hard on the outdoor courts at Melbourne Park to find their way onto the show courts in the second week for another chance to hold the Australian Open title.

First up they face Nikoloz Basilashvili and Miomir Kecmanović, who should present little challenge for the second seeds.

A new pairing to watch out for will be Australian John Peers with Slovakian Filip Polášek, who only joined forces in August 2021. They started the 2022 season with a win at the Sydney International and will be hunting their first Grand Slam title together.

Up against Italians Simone Bolelli and Fabio Fognini, the pair won the first set with a single break and showed their impressive fight, coming from 2-5 down in the second to win the set 7-5.

Peers (2017) and Polášek (2021) have experience winning the Australian Open, and it would be no surprise if they combined for another in 2022.

They've drawn a tough First Round against Australian duo - and Peers' teammates - Luke Saville and John Patrick-Smith, but are well placed to challenge for the title if they can keep their form from Sydney.

The Women's doubles world number one and two ranked players from the Czech RepublicBarbora Krejčíková and Kateřina Siniaková will be looking to go one better than their 2021 run when they open their Australian Open doubles account against Lesley Pattinama Kerkhove [NLD] and Arina Rodionova [AUS].

Off the back of a successful 2021 season, where they won French Open, Wimbledon and Tokyo Olympic titles, this doubles duo have momentum from a perfect WTA Finals run at the WTA Finals on their side.

Krejčíková is also the fourth seed in the Women's draw and could have a busy fortnight at Melbourne Park.

Since teaming up in 2019, this Japanese pairing has taken huge strides towards becoming Grand Slam champions.

Experienced doubles player Shuko Aoyama and the young 23-year-old Ena Shibahara joined forces a couple of years ago and had a strong run in 2021 to claim five WTA titles (adding to their previous three), including their biggest win at the Miami Open.

It's been a slow start to the year for these women, knocked out in the Round of 16 in Adelaide and then the semi-finals in Sydney. They'll face some tough matches as they progress through the tournament, but this is a good opportunity for them to make a Grand Slam breakthrough

The fourth seeds Sam Stosur and Chinese partner Shuai Zhang won the US Open to end the 2021 season, and in Stosur's final year on the doubles' circuit, they'll be going for another Australian Open title.

Winners in 2019, the Stosur-Zhang combination has one more year together and will want to get it off to a strong start.

After not playing the European summer, the pair returned and found form later in the season with a fun, positive approach to their tournaments that is even more suited to the 'Happy Slam' in January.

Quad Wheelchair World Number One and Australian fan-favourite Dylan Alcott will be in action at Melbourne Park for one final time, after announcing his retirement from Tennis after a final Australian Open appearance.

He won every event for a Golden Slam in 2021 and is still as fit as ever, but his roles in the community are taking a higher priority after this home tournament.

Before he hangs up the racquet, the 31-year-old will look to use the local support to his advantage and secure an eighth Australian Open title in a row.

Young 22-year-old Sam Schröder is currently second behind Alcott in the Quad Wheelchair rankings, and even beat the Australian for the US Open title in 2020 to achieve his biggest career victory.

While he couldn't break through for a singles Slam title in 2021, he pushed Alcott in the first three Slam Finals of the year and the Paralympics gold medal match.

If anyone is going to steal this final Aus Open crown from Alcott, it's Schröder he should be watching out for.

Another rising star on the Quad circuit is fellow Dutchman Niels Vink. The teenager had an exciting 2021, where he made an Australian Open Semi-Final, Tokyo Paralympic Games Semi-Final and then US Open Final, losing admirably to Alcott on all three occasions.

With six ITF Series titles to his name in 2021, can Vink go all the way in a Slam this year?

It might be tricky coming up against his countryman and Alcott, but Vink will push the top seeds all the way.

Vink and Schröder will link up in the doubles once again this Open. The Dutch duo have recently found some success in the Grand Slam Quad doubles, taking the US Open title in 2021.

They also beat the Australian pairing in Alcott and Davidson on a hard court at the Tokyo Paralympic Games, so they are well placed to challenge, even with a loud Australian crowd cheering against them.

It's hard to go past the home duo in the last tournament we will see them play together. Alcott and Davidson have won the title on Australian soil for the past four years and a fifth would conclude the reign of this doubles pairing on a very high note.

Alcott and Davidson have combined superbly over the years, playing the clutch points best and finding ways to dominate their opponents on court.

In Quad Wheelchair tennis, the players all know each other's games incredibly well, so you can never count out American David Wagner and Brit Andy Lapthorne.

Their last Australian Open title might have been five years ago, but the duo is still competing hard and has played in the Final against Alcott and Davidson for the last four years.

Current World Number One Shingo Kunieda has dominated the hard-court Slams for more than 15 years. He is now 37-years-old but shows no signs of slowing and there is every indication he has plenty more Championships in him.

Last year, Kunieda lost to Alfie Hewett in the Semi-Final at the Australian Open but defeated him in the US Open Final to claim his 25th Grand Slam title.

The battles between the pair are a highlight of every Slam, especially on the hard-court surface we see at the Australian Open. Can he take home an 11th Australian Open crown?

Alfie Hewett has had an exciting and relieving, 12 months, with the Brit making the Final of the Australian Open, winning the French and then dealing with an appeal to maintain his place in the wheelchair classification.

In November, the ITF cleared Hewett to remain on the tour, and the five-time Grand Slam winner will be looking for his sixth in 2022.

Currently, number four in the World,Brit Gordon Reid won the Australian Open in 2016 and has plenty more to prove in 2022.

Mixed individual results over the last two years, were highlighted by a bronze medal at the Paralympic Games, but he is looking for success in the Singles and Doubles events side-by-side.

English teammates Gordon Reid and Alfie Hewett have formed a formidable partnership in the doubles since they joined forces five years ago.

Achieving the calendar Slam in 2021, Reid and Hewett are the ones to beat at the 2022 Australian Open going for a third straight title.

Current World Number One in the Wheelchair Singles and Doubles, it's difficult to see anyone taking the title off the defending champion.

After a Golden Slam in 2021, De Groot has all the momentum to continue her undefeated run in Slam tournaments at the Australian Open.

There are challengers, but De Groot opened her 2022 season with a 6-0 6-1 smashing of German Katharina Kruger and is showing positive signs this could be another big year for the Dutch athlete.

Japanese 27-year-old, Yui Kamiji, has been one of those players testing De Groot for years on the ITF circuit.

She won Bronze on the hardcourt in Tokyo and starts the 2022 season second in the world.

Kamiji already has a title to her name this year, taking out the Victorian Wheelchair Open with a win against China's Zhenzhen Zhu and will be on the hunt for a bigger trophy later this month.

One of the challengers to De Groot going back-to-back for a second time is her Dutch doubles partner Aniek Van Koot.

The 31-year-old is currently World Number Three and is in a good position heading into the first Slam of the year, with a semi-final appearance this week in the ITF Super Series Melbourne Wheelchair Open against Kamiji.

The Dutch pair are the current world number one and two in the Wheelchair Doubles rankings and are the defending champions going into this Australian Open.

Both players are individually in some great form and, having played together for some time now, they've got the strongest connection of any pairing in this event.

The Dutch duo are ready to attack another Grand Slam individually and together.