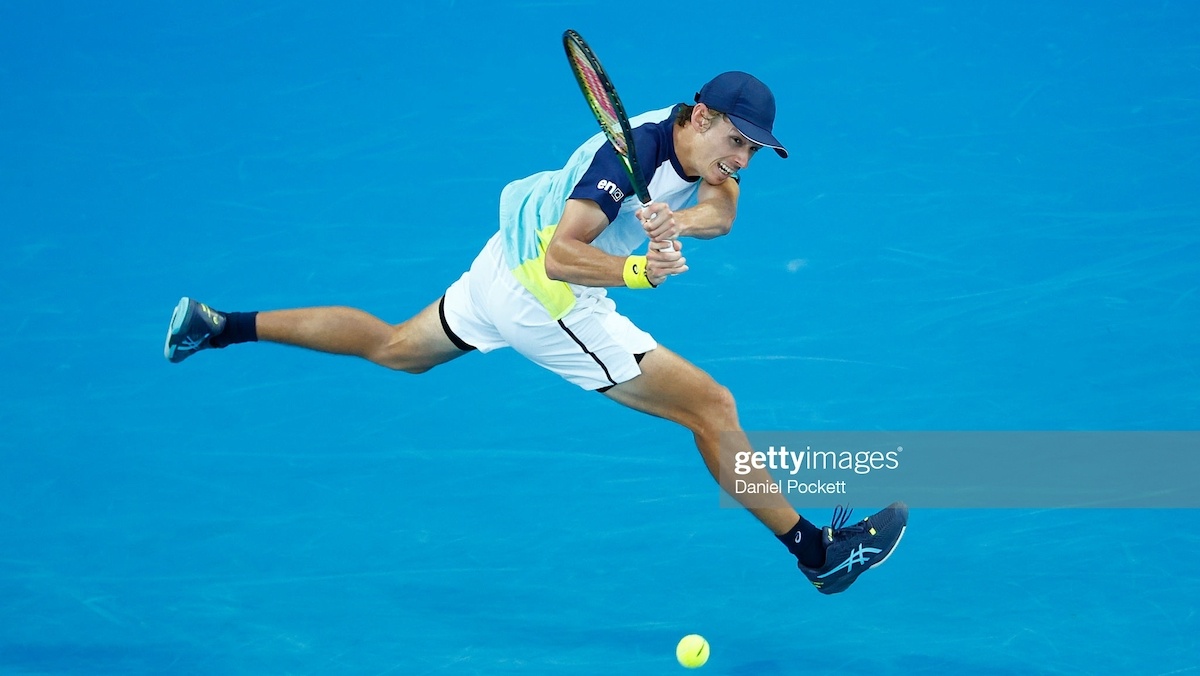 It was heating up in Melbourne on Day Six of the Australian Open, where Alex de Minaur joined fellow Australian Ash Barty in the second week.

It was heating up in Melbourne on Day Six of the Australian Open, where Alex de Minaur joined fellow Australian Ash Barty in the second week.

It was hot on Day Six at the Australian Open and not just because the blue courts were under the scorching sun, but the tennis heated up too.

Alex de Minaur joined Ash Barty as the only Australians in the fourth round, and doubles duo Max Purcell and Matthew Ebden made it four men's pairings in the third round.

Seeds across the men's and women's draws progressed. Stefanos Tsitsipas dropped one set, but moved on comfortably, as did Jannik Sinner, while Daniil Medvedev sealed up a fourth round spot in three sets.

In the women's, Simona Halep won through in straight sets and Aryna Sabalenka fought back from a set-down to advance as well.

There was plenty of doubles action, too, in a jam-packed first Saturday.

Wildcard West Australian Maddison Inglis had a hot start to her third round match against Kaia Kanepi of Estonia. Breaking Kanepi twice to move 4-0 up in the set.

Times were tougher in the second set, Inglis dropped her second service game, and the set, as the higher-ranked Estonian took control. It was, unfortunately, more of the same in the third, as Kanepi ran away to a 6-0 set.

It's been an impressive run from the World Number 133 for a very healthy payday, but it sadly comes to an end in the third round.

Another Australian wildcard who was having a dream ride through the opening two rounds, including taking out 13th seed Diego Schwartzman, fell short of American Maxime Cressy.

O'Connell's journey at Open was ended by Cressy, who serve-volleyed his way to a match-up with Daniil Medvedev.

There was success, though, for Australian Alex de Minaur, who advances to the fourth round of the Australian Open for the first time.

It was a pretty clinical match from the 'Demon', who fired away strong first serves, including eight aces, and won 84 per cent of his first-serve points.

The pressure game was up too, as de Minaur secured his service games quickly and immediately made inroads on Andújar's. Across the match, de Minaur's service games were on average two minutes shorter than the Spaniard.

After securing the first two sets with just one break in each, de Minaur pressed for a second break in the third to snap up the win in two hours and seven minutes.

He now plays Italian Jannik Sinner, who defeated Taro Daniel of Japan in four sets. The 11th seed will present a much greater challenge for De Minaur, who will be unlikely to execute such comfortable service game wins.

After dropping the opening set, Purcell and Ebden broke once in the second set to level things. They then broke at 5-5 in the third to have an opportunity to serve for the match, which Ebden did fairly confidently.

Monique Adamczak and Chinese doubles partner Han Xinyun fell to the number one women's doubles seedsBarbora Krejčíková and Kateřina Siniaková, who are absolutely dominating on their run to another Grand Slam title.

In the mixed doubles, Jaimee Fourlis and Jason Kubler shocked seventh seedsNina Stojanović and Mate Pavić to advance to the second round.

After the Australians levelled it at one-set all, they were unable to serve it out in the match tiebreak at 9-6 up. From 10-all it went point-for-point until Stojanović and Pavić lost the match with three unforced errors in a row.

John Peers also made it through the mixed doubles first round with Zhang Shuai of China. The second seed's had a comfortable match up first, defeatingAndreja Klepač and Joran Vliegen in two sets.

It wasn't such good news for Astra Sharma and John-Patrick Smith, who fell toLucie Hradecká and Gonzalo Escobar in straight sets, while Storm Sanders and her English teammate Neal Skupski were unable to match it with number eight seeds Ena Shibahara and Ben McLachlan in the second set tiebreak.

Fourteenth seed Simona Halep moved through to the fourth round with a straight-sets victory over Montenegrin Danka Kovinić.

Danielle Collins was also able to push past Clara Tauson, who challenged the 27th seed by taking the first set. She will now face Elise Mertens in the fourth round, after the Belgian beat Zhang Shuai 6-2 6-2.

There was an upset later on, on Rod Laver Arena, as 10th seedAnastasia Palyvuchenkova was bundled out by Romanian Sorana Cîrstea.

Aryna Sabalenka continues to find a way to dominate, despite serving poorly again, her 10 double faults didn't stop her from progressing through to the Round of 16 with a three-set win over the 31st seed Markéta Vondroušová. In fact, post-match Sabalenka said she was "mostly [she's] happy that [she] only made 10 double faults."

Vondroušová won the opening set, but Sabalenka turned it around in the heat of the afternoon, her first serve percentage improving in the second for a crucial 6-3 win.

The final set was all Sabalenka, making twelve groundstroke winners on her way to victory.

It had been a long time coming, but finally, American Taylor Fritz is through to the second week of a Grand Slam. The 20th seed has been around the mark for some time, but just hasn't been able to crack the Round of 16 and it'll require impressive tennis to take him out now.

Up against 15th seed Roberto Bautista Agut, Fritz came out firing on all cylinders to take the opening set 6-0.

The Spaniard fought for 10 minutes to hold his opening service game and continued this spirit to hit back in the second and level the match.

With a set under his belt, Bautista Agut didn't stop there, taking the third 6-3, breaking twice at the back end of the set.

Fritz found some more energy in the fourth to counteract the Spaniard's control of the game, breaking in the first and taking just under a minute to consolidate on his service game.

Bautista Agut broke back, but Fritz didn't let him have it level for long, returning fire, only to lose the lead once again.

The back-and-forth set ended with the American breaking for a 4-3 lead and serving it out over his next two service games.

In the final set, Fritz broke in the opening game with a couple of nice winners and consolidated in the following game. The pair each held their serves as the set progressed, however, it became clear Fritz's were much cleaner, and easier, to secure.

Stefanos Tsitsipas lost one tie-break set on his way to another fourth round match at the Australian Open, while Canadian ninth seed Felix Auger Aliassime needed less than two hours to dispatch Brit Dan Evans in straight sets.

The win sets up a fourth round match with Marin Čilić, who defeated number five seed Andrey Rublev in four sets.

Rublev fought back in the third, but was unable to slow down Čilić, who charged to victory on Margaret Court Arena to end Day Six play.

Around the grounds on the doubles court, men's second seeds Joe Salisbury and Rajeev Ram dashed through to the third round with an easy straight sets victory.

Another pair who were barely troubled was German Tim Pütz and New Zealander Michael Venus. The sixth seeds dominated the opening set and then cruised to a comfortable 6-4 win in the second.

Over in the women's draw, in an all-American face-off, Danielle Collins and Desirae Krawczyk have pulled off an unlikely win over the seeded pair in Jessica Pegula and Asia Muhammad.