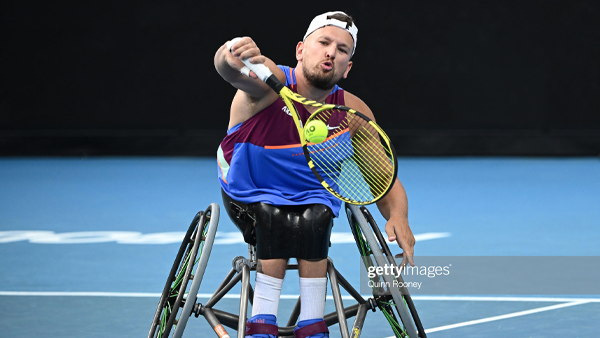 Day Seven of the Australian Open saw Ash Barty continue her dominance while Dylan Alcott began his quest for an eighth-straight title in his final tournament.

Day Seven of the Australian Open saw Ash Barty continue her dominance while Dylan Alcott began his quest for an eighth-straight title in his final tournament.

On Day Seven of the Australian Open, Ashleigh Barty has continued her dominance at this year's tournament with another straight-sets win. Dylan Alcott, in his swansong, is one step closer to his eighth-straight title at Melbourne Park as the nation's wildcard doubles duo of Thanasi Kokkinakis and Nick Kygrios power onto the fourth round.

Elsewhere around the precinct, Madison Keys provided an upset in the women's singles, defeating Paula Badosa, while Denis Shapovalov is through to the quarterfinals for the first time at the Australian Open with a win over Alexander Zverev.

The doubles continued with mixed results for the Australians as the quad singles began with the aforementioned Alcott, and Heath Davidson, who each won their respective quarterfinal matchups.

Aussies in Action - Special K still a treat for fans

Ashleigh Barty has continued her trajectory towards a maiden Australian Open title, prevailing over Amanda Anisimova of the USA in straight sets and booking a meeting with another American, Jessica Pegula.

The world number 60, Anisimova looked up for the fight against the world number one early on, taking the first game, holding her nerve as it went to deuce on two occasions. From there, neither player could break the other as they held out on their respective service games when the score read three-all.

Barty finally got the break in the seventh game of the set and had a slight buffer when she controlled her own service game the following game, despite Anisimova taking it to deuce. While Anisimova won the next game, Barty served for the set, taking it without giving up any points.

Anisimova proved she was not down, and up for the fight, and despite the first game going to deuce again, she held her own to start well, and continue as she broke Barty in the next game. However, such is the prowess of the Australian, she evened up the ledger as she forced her opponent into some costly errors.

The American got ahead once again, however, Barty won the next four games to take the set, and the match as Anisimova's unforced errors continued to climb, and thus, become her downfall.

The pairing of Thanasi Kokkinakis and Nick Kygrios continue to be a threat in the men's doubles, advancing to the quarter-finals with a three-set match against the number 15 seeds, Uruguay's Ariel Behar and Ecuador's Gonzalo Escobar.

It was an all-around back-and-forth affair between the two pairs, as neither could break the other throughout the first eight games of the first set, tallied at four-all before the Australians got the break, and then Kyrgios, serving, secured the first set with back-to-back aces.

Both sides won their first service games as the second set got underway, but it was time for Behar and Escobar to build a small lead, breaking Kokkinakis and Kygrios once, in between two service games of their own to take a 4-1 lead. However, the might of the Australian pair, with the crowd behind them, did exactly the same and levelled the score, although couldn't continue the push as their opponents claimed the second set.

It was a back-and-forth affair to begin in the first four games of the third set before the Australians took a 4-2 lead, and some ascendency. Although, their opponents wouldn't give up, winning two of the next three games but a strong serving game from Kygrios - which included two aces - gave the pair the game, the set and the match.

The Australian duo, who earned a wildcard entry into the Australian Open, in their next contest, take on Germany's Tim Pütz and New Zealand's Michael Venus for a spot in the semi-finals to continue the dream run.

In his final Australian Open, Dylan Alcott is off to a good start in his quest for an eighth-straight title at this tournament, defeating the Netherlands' Niels Vink in the quad wheelchair singles. It was the first matchup between the pair since the 2021 US Open final.

A tiebreak had to be used to decide the first set, of which Alcott couldn't get anywhere near Vink who had saved a set point in the 12th game, the Dutchman eventually taking the chocolates in a dominant output to have the Australian on the back foot after the first set.

However, like he has shown previously to be capable of, Alcott bounced back in spectacular fashion in the resulting final two sets of the match, only giving up a further six games along the way to the win.

In the second set, Alcott took a crucial break in the ninth game due to an unforced error from Vink and then, in the third set, was also able to secure the break in the first, third and fifth games to help earn the win.

Alcott will face world number five Andy Lapthorne in the semi-finals and will have the advantage, having won each of the previous eight Australian Open matchups against the Englishman.

For the remainder of the Australians on show during Day Seven action, in the men's doubles, Jason Kubler and Chris O'Connell were a walkover, which allowed Germany's Tim Puetz and New Zealand's Michael Venus to advance. Also in the men's doubles, John Peers and his Serbian partner Filip Polasek defeated German pair Kevin Karwietz and Andreas Mies in two sets.

In the mixed doubles, Australian duo Arina Rodionova and Marc Polmans went down in a nail-biting three-set match to France's Kristina Mladenovic and Serbia's Ivan Dodig. Ellen Perez and her Dutch teammate Matwe Middelkoop also fell in their matchup against India's Sania Mirza and the USA's Rajeev Ram in two sets, which included a first-set tiebreaker.

Heath Davidson got his Australian Open account off to a fast start against Japan's Koji Sugeno in the quad singles, winning in straight sets as he punished his opponent in converting the break points as well as his winners on the court, and around the net.

This win ensured it would be the first time in his career where he's advanced to the semi-finals, setting up a showdown with world number two, Dutchman Sam Schroder.

Canada's Denis Shapovalov has made his own history at Melbourne Park, advancing through to the quarter-finals at the Australian Open for the first time in his six-year professional career after defeating Germany's Alexander Zverev. Previously, his best effort at the Australian Open was a third round exit in 2019 and 2021.

Shapovalov won the first game in a tense battle that saw deuce come up three times and while Zverev got a game back immediately, the world number 14 claimed the next two without giving up too many points. Zverev did win two of the next three games before a perfect serving game saw Shapovalov claim the first set.

The Canadian picked up where he left off in the second set, winning the first two games, only for Zverev to start to find some momentum, winning the next three as he forced Shapovalov into errors.

Shapovalov tied things up at three-all but again, Zverev powered through to win the next two games in an easy fashion but his opponent wouldn't let him get away as the scores were tied at five-apiece.

The second set was sent to a tiebreak when each player won another game and while Shapovalov got out to a 5-1 lead, Zverev clawed his way back to 6-5 before the German made an error, handing the game to the Canadian.

Shapovalov won the first three games of the next set but a perfect fourth game from Zverev got him on the scoreboard in the third set. Zverev won two of the next three games but, as it was in the first set, Shapovalov, up 5-3, was serving for the set, and the match, which he won, now looking forward to a matchup with Rafael Nadal.

Elsewhere in the men's singles, Spain's Rafael Nadal and France's Adrian Mannarino fought in a tough battle with a first set that went for 81 minutes, including a tiebreak that lasted over half an hour as neither opponent could find the necessary point to finish.

Eventually, the Spaniard only gave up two more games in each of the next two sets to claim the win as Mannarino pushed through an injury concern.

Frenchman Gael Monfils had a hard battle with Serbian Miomir Kecmanović, the 17th seed winning in straight sets to reach the last eight of the Australian Open for the first time since 2016.

He used his powerful serve to deliver some fast aces down the line, with the first serve win percentage of 81 per cent handy in setting up the win at crucial moments.

It was a similar scenario in the final men's singles match of Day Seven at the Australian Open as Spain's Pablo Carreño Busta and Italy's Matteo Berrettini battled it out for a quarterfinal spot.

In the end, it was the number seven seed Berrettini who overcame his opponent, finding momentum after a gruelling second set tiebreak to take the game - with a collective 28 aces from the Italian thrown down throughout the encounter.

The 2022 Adelaide International winner, Keys has gone through to her first Grand Slam quarterfinal since the 2019 French Open with an exceptional service game, also faring slightly better in the return serves against Badosa on the way to the victory.

American Jessica Pegula won her third fourth-round matchup in straight sets against Greek Maria Sakkari, with a first-set tiebreaker before closing out the encounter as she was just as good on the second serves as the first serves.

Barbora Krejčíková of Czechia beat two-time Australian Open champion Victoria Azarenka in straight sets with an 87 per cent first serve win percentage ensuring she got the upper hand early as she progresses to the quarterfinals - her best effort at the Australian Open.

Men's doubles third seed, Spain's Marcel Granollers and Uruguay's Horacio Zeballos prevailed in straight sets against the Spanish duo of Pablo Andújar and Pedro Martinez, converting break points when it was needed and through being dominant in serving and returning.

In the women's doubles draw from Day Seven, it was headlined by third seeds, Russia's Veronika Kudermetova and Belgium's Elise Mertens are through to the quarterfinals after a straight-sets win over 14th seeds, China's Yang Zhaoxuan and Xu Yifan.

The other exciting game from today's women's doubles lineup was a three-set thriller between Brazil's Beatriz Haddad Maia and Kazakhstani Anna Danilina who won a third-set tiebreaker against Spain's Aliona Bolslva and Norway's Ulrikke Eikeri.

To round out the action on Day Seven, in the mixed doubles, eighth seeds, Ben McLachlan and Ena Shibahara of Japan beat Mexico's Santiago González and Nadila Kichenok of Ukraine in three sets, while Aisam-ul-Haq from Pakistan and Makoto Ninomiya of Japan beat the pairing of Ukraine's Lyudmyla Kichenok and Kahzakstan's Audrey Golubev.