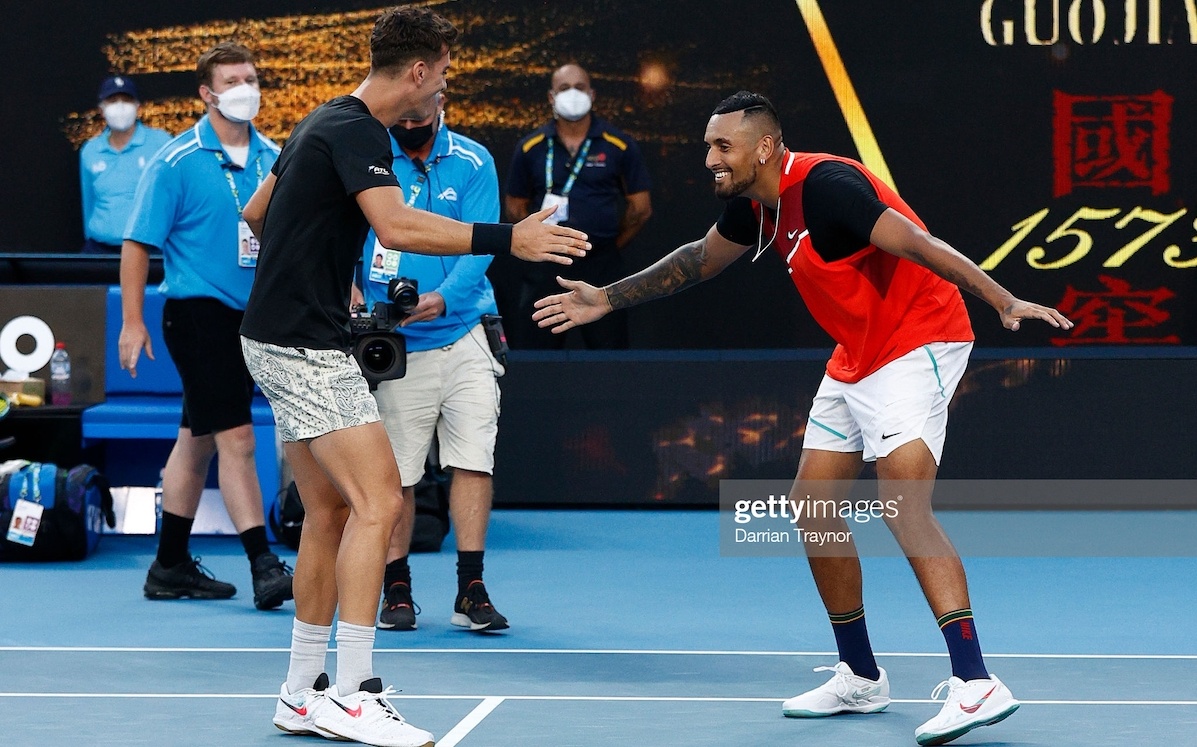 Ash Barty through to the fourth round and the Special Ks knocking off the top seeds highlighted a memorable Day Five at the Australian Open.

Ash Barty through to the fourth round and the Special Ks knocking off the top seeds highlighted a memorable Day Five at the Australian Open.

Ash Barty was back in action on Day Five of the Australian Open, as were Australia's Special Ks taking out the top seeds and Matteo Berrettini, who survived an epic five-set clash with 18-year-old Carlos Alcaraz.

The doubles draws were in full swing and while some Aussies, including wildcard duo Li Tu and Dane Sweeny, had success, it was the end of Sam Stosurs' women's doubles run at the Australian Open.

Let's dive into what happened around the grounds on Day Five.

Aussies in Action - Barty cruises through, Kyrgios and Kokkinakis Kings of the court

It took just one hour and one minute for Barty to book her place in the fourth round, taking out Italian Camila Giorgi.

The 30th seed was simply no match for the cool, calm and collected Australian; they said it would get tougher from here, but she made this third round match-up look very easy.

Barty broke in the second game and moved 3-0 up, a convincing start while Giorgi settled slowly, serving two double faults to drop the game.

At 40-0 down in her service game at 4-2, in danger of losing the break, Barty pulled out a service winner and then forced backhand errors off the racquet of Giorgi to save it for 5-2.

It was this game that gave her the momentum to blitz through the next break and into the second set.

When Barty was able to execute her plan to move Giorgi away from the baseline, where she likes to take control of the middle of the court, Giorgi looked uncomfortable and made too many errors.

The World Number One served four aces, won 93 per cent of her first-serve points and made just 13 unforced errors, compared to Giorgi's 24.

Barty now meets American Amanda Anisimova in the fourth round.

The Show Court Arena crowd warmed up for the Nick Kyrgios show by cheering on another Aussie doubles duo - Dane Sweeny and Li Tu - who came from behind in the first set tiebreak to secure it 8-6.

In the second set, the Australians broke Treat Huey's serve and then Christopher Rungkat's for a 4-0 lead. Thankfully they had that second break, as Sweeny was unable to serve the match out, instead putting up two double faults in a row.

Tu secured the win, though it was the quality net play from Sweeny that got the job done.

The Sweeny-mullet had its time in the limelight before the show was stolen by comedy duo Thanasi Kokkinakis and Kyrgios. It was a different vibe out on the Show Court though, with the best mates facing the number one seeds, and more serious pairing, inNikola Mektić and Mate Pavić, rather than their compatriots.

They came out firing in the opening game, breaking and getting the crowd involved immediately but were quickly reminded it was the number one's at the other end.

The Croatian pair broke on Kyrgios' serve, but the Aussies hit back immediately. It continued to be a closely contested set all the way to a tiebreak.

Going point-for-point in the tiebreak, the situation was tense, the rowdy crowd wanted this to continue and at seven-all some might have thought they would go all night.

Kokkinakis served another ace before Pavić returned serve with a winner. A forehand cross-court winner from Kyrgios had Metkić throwing his racquet to try and hit the ball that was well and truly out of reach.

An unreturnable serve by Kyrgios secured the Australians the opening set.

Where there were plans, they were executed perfectly. Down the T serves from Kokkinakis, and the positioning of Kyrgios' serve to have his partner pop up and end the point at the net were some of the highlights.

The atmosphere in the Show Court Arena was louder and rowdier in the second set, the Croatians were frustrated by the noise on service games and the umpire asked the crowd to be 'respectful' more than once.

However, it only got the Australians more excited, chest-bumping their way into the third round with a 6-3 second set.

Elsewhere in doubles action, Sam Stosur's women's doubles run at the Australian Open ended just one day after her singles. Stosur and partner Zhang Shuai of China were the number four seeds and in strong hardcourt form at the back end of 2021.

However, in the second round, they put all of their energy into winning the first set tiebreak and could not back it up, losing the second 6-1 and third 7-5 to American Bernarda Pera and Poland's Magda Linette.

She still has the mixed doubles with Matthew Ebden left for this tournament.

Priscilla Hon and Lizette Cabrera had a wildcard chance, but in the second round faced a tough ask against Japanese number two seeds Ena Shibahara and Shuko Aoyama.

Off the back of their Sydney International title, John Peers and Filip Polášek dropped a set to the Aussie wildcard pairRinky Hijikata and Tristan Schoolkate, but easily assured their place in the next round.

There was also mixed doubles action with Arina Rodionova and Marc Polmans won a tight contest in the third set match tiebreak, 10-7.

Perez was back in action with Dutchman Matwé Middelkoop for their first round mixed doubles clash, which they won with relative ease over third seeds Nicole Melichar-Martinez and Robert Farah.

An epic four-hour contest occurred during the afternoon on Rod Laver Arena, giving the fans that hung around their money's worth, while the Barty party had to wait in the wings.

Seventh seed Berrettini survived the five-setter, winning 10-5 in the match tiebreak to decide the result. Spanish 18-year-old Carlos Alcaraz can hold his head high, he'll be a name to remember on tour in 2022 and beyond.

After taking the opening set 6-2, Berrettini was challenged more by Alcaraz in the second and taken to a tiebreak for the 2-0 set lead.

The Spaniard turned things around in the third set, with everything on the line, and ran Berrettini off his feet to win the fourth as well.

Berrettini looked as though he was lacking energy and his first serve points won dropped to just 63 per cent. Alcaraz converted two of his break point opportunities and had all the momentum running into the fifth.

In the deciding set, Berrettini went down early, appearing to roll his ankle. The medical team were called, but he was back on his feet in no time.

It wasn't easy, but Berrettini and Alcaraz continued to hold their service games, all-the-while pushing each other with a couple of break point opportunities.

The match was decided by a 10-point tiebreaker, and it was as close a contest as you could get to begin with. However, stunning a forehand from Berrettini and an error from Alcaraz brought up match point and the Italian needed just one to make it count.

After Barty won her third round match, attention quickly turned to Naomi Osaka on Margaret Court Arena where she was deadlocked, one set all with Amanda Anisimova.

The pair were unable to be split all the way to the match tiebreak. Early on in the set, the games lasted more than five minutes each, as they pushed each other for every point.

They each found a couple of easy service games in the middle, but then at 5-4 up Osaka challenged Anisimova for the break. The American faced a match point, but saved it and levelled the match again at 5-5.

In the tiebreak, three forced backhand errors from Osaka saw her down early points and chasing her way to 10. Anisimova lost a couple of points with errors but increased her lead with a lovely backhand.

An ace sealed the deal and set up the fourth round clash with World Number One, Barty.

Victória Azárenka continued her tournament with a dominant defeat of 15th seed Elina Svitolina. The 24th seed won the opening eight games of the match, yes - she won the first set 6-0 against Svitolina, number 17 in the world.

The career resurgence from the 32-year-old started late in the 2021 season and appears to be going from strength to strength through the Australian summer after she made the quarter-finals of the Adelaide International.

The Belarusian was dominant on her serve, losing just three points across the opening set. She was aggressive on the baseline and forced errors off the racquet of Svitolina.

In the second set, Svitolina got on the board with a love-service game, which included a couple of winners. The Ukrainian pushed Azárenka a little more through the second set, however, was unable to execute any of her four break point opportunities.

She's a super-mum as well, her five-year-old son joining her on Tour and even listening in on her press conferences.

Rafael Nadal was back in action on Rod Laver Arena on Friday night and everything was once again as impressive as it always is from the number sixth seed.

The first two sets were fairly comfortable for the Spaniard, his footwork neat and his shot-making even higher quality. After being challenged in the third, and dropping it 6-3, Nadal pulled out the fist pump at the first break in the fourth and never looked back, dominating for a 6-1 set and the victory.

The seeds continued to progress, with Alexander Zverev joining the aforementioned men in the fourth round. He demolished Radu Albot, ranked number 124 in the world, in three cruisey sets. The German served 16 aces on his way to victory and did not concede a break, despite being challenged by break points.

In the women's doubles, third seeds Kudermetova and Elise Merten started strong and were able to overcome a second-set scare to move through to the third round.

However, it wasn't so lucky for the number one seeds in mixed doubles, American Desirae Krawczyk and Englishman Joe Salisbury. They won the first set in a tight tiebreak and continued to keep things close in the second set, but were broken to go down 4-5 on Salisbury's serve and could not recover quick enough.

In the match tiebreak, Giuliana Olmos and Marcelo Arévalo were able to get out to an early lead thanks to some errors - both forced and unforced - by the other team. They held it to knock out the top seeds in the opener.